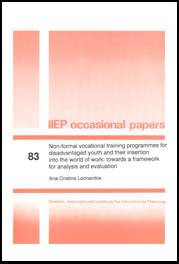 The problem of working children is purposely excluded from the present discussions, to the extent that it raises issues of great density such as 'minimum age' conventions, forced labour, the availability of schooling and social support systems for poor families, all of which deserve particular attention and careful examination, far exceeding the objectives of this study4. Sure enough, this army of working children is bound to become the ill-educated 'disadvantaged youth' of tomorrow, as the great majority waives attendance at school in order to guarantee, even under precarious conditions, their own or their families' survival. Addressing the needs of this sector of the population should be the high priority of national governments in developing countries and part of any comprehensive long-term strategy of social development.

4Some of these issues have already been discussed in: Leonardos, A.C. (1995) Effective strategies and approaches for reaching street and working children through education: reviewing recent developments, Issues and Methodologies in Educational Development, No. 12,/UNESCO/IIEP, 1995.

Furthermore, this study places focus on the urban and rural disadvantaged youth of developing countries. The differences in their social, cultural and political background as well as the particularities of each region within the developing world will also be heeded whenever applicable, as they vary greatly.

Formal vocational training programmes will be discussed only in as far as they may bring evidence to bear on the case of non-formal programmes. As will be discussed later by assuming that there is some degree of education, these vocational training programmes are not addressed to the disadvantaged youth population but rather to the upper-lower and middle-class population cohort of developing countries.

Finally, welfare programmes - much more common in developed than in developing countries - will not be included in this study either. The focus will be placed primarily on supporting strategies and approaches (comprehensive and piecemeal) initiated by non-formal delivery systems (GOs and NGOs) geared towards the training of the disadvantaged youth and their insertion into working life.