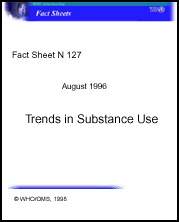 TRENDS IN SUBSTANCE USE AND ASSOCIATED HEALTH PROBLEMS

· Psychoactive substance use is an increasing public health concern. Problems associated with this use cover a broad spectrum which includes significant health consequences, social and family disruption, and economic issues.

· Reliable estimates of the extent and prevalence of illicit drug consumption are difficult to obtain because users of these substances are unlikely to report on an illegal activity. They are likely to be under-sampled in household surveys, and may be less inclined to give truthful responses for fear of reprisals.

· Despite these difficulties, it is estimated that approximately 15 million people worldwide incur a significant risk to their health as a result of using psychoactive substances. It is further estimated that one third of these users inject drugs and many believe this figure to be an under-estimation. Recent figures suggest that drug injection is responsible for between 100,000 and 200,000 deaths per year worldwide.

· Many developing countries have also seen rapid increases in the use of opioids, cocaine and psychotropic drugs, and resulting problems. In a number of these countries drug injection is becoming increasingly common, and associated with this is the sharing of injecting equipment which carries the risk of spreading the human immunodeficiency virus (HIV), hepatitis B and C, and other blood-borne infections.

· In both developed and developing countries, the intentional inhalation of volatile solvents and other inhalants is an increasing problem, especially in marginalized groups, including street children and indigenous young people. The substances used include products that are widely available - such as glue, petrol, paint thinners, domestic polish and aerosol sprays. The use of these substances is a particular concern since they are cheap, easily obtained and provide a rapid “high”. The harm they cause includes neurological and psychological dysfunction, liver and kidney damage, and sudden death.

· The use of cannabis is also increasingly widespread throughout the world. Major health risks may be experienced by those who smoke the drug heavily over a period of years. These risks include: development of a cannabis dependence syndrome, development of chronic bronchitis and possibly cancers of the respiratory system, increased risk of a car accident if driving while intoxicated, and impairment of cognitive functions.

· A further trend is towards the use of multiple substances, with people moving from one substance to another, and using drugs in various combinations. It is evident that intoxication, poisoning and overdoses are increasing as these new combinations of substances are being used.

· In most countries problems related to substance use have traditionally affected males, but with rapid social and economic changes over the past few decades there has been a dramatic increase in use among women in both developed and developing countries. For physiological reasons, women frequently have a lower tolerance to such substances than men, and since many women substance users are of child-bearing age, the effects on the foetus are also a cause of concern.

· The complexities and scope of substance use problems require an equally complex and integrated approach. WHO, with its unique health expertise and long-standing work in the areas of research, prevention, treatment and care, is ideally placed to confront this issue.

· Work currently being undertaken by WHO spans activities in areas of epidemiological surveillance and risk assessment, dissemination of information, development and implementation of primary prevention programmes, identification and development of treatment and rehabilitation approaches, community empowerment, and regulatory controls systems.

· A key focus for many of these initiatives is work with particularly vulnerable or at-risk populations. These include indigenous people, street children, other young people in especially difficult circumstances, and women drug users.

· One specific initiative is the development of a global epidemiological surveillance project to assess and describe patterns and trends of substance abuse, along with the health consequences and national policy responses.

· The WHO Programme on Substance Abuse has also established a project to address the needs of street children and other young people in especially difficult circumstances, recognizing their unique risk of substance related harm. The project includes initiatives to train street educators working with young people to deal effectively with substance use problems experienced by these young people.

· A further project has been designed to assist with the development of culturally appropriate programmes to reduce the harm associated with the use of substances among indigenous populations.

· Alcohol is consumed in most, although not all, countries. However, drinking habits vary in different cultures. In some, traditional patterns of drinking are occasional and celebratory, while in others, alcohol plays a role as part of the diet.

· Alcohol can bring both benefit and harm to the individual. Most of the scientific evidence about the benefit as well as the harm derives from industrialized countries and cultures where alcohol consumption is largely accepted and where diet and lifestyles lend themselves to heart problems. Any possible benefit from alcohol should therefore be considered in its socio-cultural context and cannot be generalized to those cultures and societies where drinking is not acceptable and abstention is the norm.

· Alcohol consumption has been found to reduce, in certain age groups, the risk of coronary heart disease and ischaemic stroke. Despite this individual benefit, the harm associated with the misuse of alcohol constitutes a major public health problem in both developed and developing countries. According to statistics available to WHO, there are around three quarters of a million alcohol-related deaths each year. Alcohol-related diseases and injuries account for between three to four per cent of the annual global burden of disease and injury. Alcohol is a significant factor in hospital admissions, road traffic deaths, industrial accidents, accidental drowning, homicide and suicide.

· The morbidity and disability resulting from alcohol misuse represent a major burden to nearly all countries in the world. Quite apart from the problems affecting individuals, alcohol is implicated in a range of social problems including domestic violence, marital breakdown, absenteeism from work, and child abuse.

· Young people can be particularly vulnerable to acute alcohol effects because of their lower tolerance to alcohol, their lack of experience with drinking, and their more hazardous patterns of drinking which include episodic drinking in high risk situations.

· Women are also at higher risk of alcohol-related harm than men because of their physical differences related to body weight and composition of fatty tissue. Women reach a higher blood alcohol concentration than men for the same amount of alcohol consumed. Drinking during pregnancy has been linked with a higher risk of miscarriage, still birth and premature births, and foetal alcohol syndrome.

· The World Health Organization strives to reduce the morbidity and mortality caused by the use of alcohol. However, there is no single solution to reducing alcohol related harm. What is required is a comprehensive range of strategies which can address the many causes and dimensions of alcohol problems. Such strategies may include:

- controls on price and availability;
- minimum age for purchase of alcohol;
- legislative measures to curb driving while under the influence of alcohol;
- restrictions on the promotion, marketing and advertising of alcohol;
- public education and awareness programmes;
- primary health care and community based interventions.

· Smoking is estimated to have caused around three million deaths a year in the early 1990s, and the death toll is steadily increasing. Unless current trends are reversed, that figure is expected to rise to ten million deaths per year by the 2020s or early 2030s, with 70% of those deaths occurring in developing countries. The chief uncertainty is not whether these will occur, but exactly when. Of all the diseases causally associated with smoking, lung cancer is the most well known. However, smoking actually causes more deaths from diseases other than lung cancer. In 1995, there were 514,000 smoking-caused lung cancer deaths in developed countries, compared to 625,000 smoking-related deaths from heart and other vascular diseases in the same year.

· According to WHO estimates, there are around 1.1 thousand million smokers in the world - about one-third of the global population aged 15 years and above. Globally, approximately 47% of men and 12% of women smoke. In developing countries, available data suggest that 48% of men smoke as do 7% of women, while in developed countries, 42% of men and 24% of women smoke.

· Nicotine has been clearly recognized as addictive and tobacco dependence has been classified as a mental and behavioural disorder according to WHO’s International Classification of Diseases, ICD-10. All tobacco products contain substantial amounts of nicotine. Nicotine is absorbed readily from tobacco smoke in the lungs and from smokeless tobacco in the mouth or nose. Nicotine is a powerful pharmacological agent that acts in a variety of ways at different sites in the body. After reaching the blood stream, nicotine enters the brain, interacts with specific receptors in brain tissue, and initiates metabolic and electrical activity in the brain.

· In a vast number of countries, smoking typically begins in adolescence. Evidence suggests that the longer a person delays the onset of smoking the less likely they are to take up the habit. Therefore, it is vital that intensive efforts be made to encourage young non-smokers to stay smoke-free.

· As is true for most drug addictions, tobacco use is not always constant from initiation onwards; the process of graduation from first use to addiction can take months or even years. In fact, initial experiences with tobacco are sometimes negative and require social pressure and other factors to maintain exposure until the addiction develops. Tolerance to nicotine appears to be acquired as people progress from initially smoking a few cigarettes to smoking greater numbers of cigarettes more often. Tolerance of nicotine increases over time, and experienced smokers can self-administer doses of nicotine that would make nonsmokers ill. The pathophysiology of nicotine dependence clearly involves the brain, the endocrine system, and behaviour. Although the effects of nicotine administration and deprivation are complex, they are orderly and are related to factors such as the amount of nicotine administered and the time since the last dose.

· Nicotine withdrawal, an organic mental disorder induced by the removal of psychoactive substance, is described as “a characteristic withdrawal syndrome due to the abrupt cessation of or reduction in the use of nicotine-containing substances that has been at least moderate in duration and amount. The syndrome includes craving for nicotine, irritability, frustration, or anger, difficulty concentrating, restlessness, decreased heart rate, and increased appetite or weight gain” (American Psychiatric Association, 1987, p. 150). Physical dependence can complicate the process of achieving and maintaining tobacco abstinence, and the symptoms can be so unpleasant as to precipitate relapse.

· The potential for behavioural and pharmacological treatment of the addicted tobacco user and the problems of withdrawal should also be recognized. Although 75%-85% of smokers, where this has been measured, want to quit and about a third have made at least three serious attempts, less than half of smokers succeed in stopping permanently before the age of 60. Nicotine dependence is clearly a major barrier to successful cessation. Therefore, smoking control policies should contain both activities to strengthen smokers’ motivation to quit (health education, public information, price policies, smoke-free policies, behavioural treatment, etc.) as well as activities to reduce dependence-related difficulties for smokers to quit (behavioural and pharmacological treatment).

· In order to achieve successful cessation of smoking on a very large scale, special “cessation programmes” are far from enough. Currently, only a few health professionals are trained in the treatment of tobacco dependence. All health professionals, including doctors, nurses, and pharmacists should be given both basic and in-service training so that they are capable of providing advice and/or treatment for tobacco dependence. Tobacco dependence is a serious public health problem which warrants serious attention if the epidemic of tobacco-related mortality and morbidity are to be reduced.

· WHO will continue to play a leading role in the global prevention and reduction of tobacco use and in the promotion of the concept of tobacco-free societies. Specific programme objectives include: