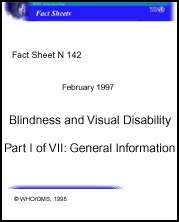 Part I of VII: General Information

The loss of eyesight is one of the most serious misfortunes that can befall a person. Due to the lack of epidemiological data, especially from the developed countries, the exact number of blind persons in the world is not known. In 1994, WHO estimated it to be around 38 million with a further 110 million cases of low vision, that are at risk of becoming blind. Thus, the global burden of serious visual impairment is estimated to be 148 million people.

The estimated worldwide prevalence of blindness is 0.7%, ranging from 0.3% in the Established Market Economies and Former Socialist Economies of Europe to 0.6% in China to 1% in India to 1.4% in Sub-Saharan Africa.

Nine out of ten of those who are blind live in the developing world. In general, more than two-thirds of today’s blindness could be avoided (prevented or treated) by applying existing knowledge and technology.

Apart from loss of functional ability and self-esteem, blindness and serious visual impairment have considerable economic implications. They lead to a loss of productivity and income, and to social dependence which requires rehabilitative and supportive measures. In India and the USA, for example, the cost of blindness to society is conservatively estimated at US$ 4.6 and 4.1 US$ billion per year respectively.

The estimates of the prevalence of blindness were prepared on the basis of a simple population-based assessment methodology for visual loss and its causes, developed by the WHO Programme for the Prevention of Blindness (PBL).

In its work PBL uses the definitions included in the International Statistical Classification of Diseases, and Related Health Problems, tenth revision (ICD-10).

Blindness is defined as visual acuity of less than 3/60 (0.05) or corresponding visual field loss in the better eye with best possible correction (visual impairment categories 3,4 and 5 in ICD-10). This corresponds to loss of walk-about vision.