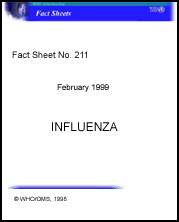 Influenza - commonly called the “flu” - is one of the oldest and most common diseases known to man. It can also be one of the deadliest. Influenza was first described by Hippocrates in 412 BC and the first well-described pandemic of influenza-like disease occurred in 1580. Since that time, 31 such possible influenza pandemics have been documented, with three occurring in this century: in 1918, 1957 and 1968. The disease today still affects large sections of the population each year. Its ability to kill stems from the fact that the virus can mutate quickly, often producing new strains against which human beings have no immunity. When this occurs, mortality from influenza can be staggering such as, for example, during the “Spanish Flu” pandemic of 1918-1920, when an at least 20 million people died from influenza.

The Disease: Influenza is an acute respiratory illness caused by influenza viruses A and B. On clinical grounds alone it cannot be distinguished from other acute respiratory infection; laboratory tests are necessary. It is most often a mild viral infection transmitted by respiratory secretions through sneezing or coughing.

Epidemiology: Influenza is a disease that comes in seasonal epidemics and occurs due to minor changes in the influenza viral antigenic proteins (antigenic drift). These account for most of the changes in the viruses from one season to another.

Influenza also occurs as worldwide epidemics - called pandemics - due to major antigenic changes (antigenic shift) that are independent of season. Such antigenic shifts occurs only occasionally. When it happens, however, pandemic influenza, which could affect large portions of the population, results. This is because of the absence of immunity against the “new” virus. Before World War 1 influenza was not considered a major public health threat. But that changed with the great “Spanish flu” pandemic in 1918-1920, which was caused by influenza A(H1N1).

There is evidence that the viruses which caused these pandemics originated from animals (1918 = swine, 1957 and 1968 = avian strains). In 1976, a new influenza virus from pigs caused human infections and severe illness, while in 1997-1998, an outbreak of influenza whose origins were avian occurred in Hong Kong, Special Administrative Region of China. A vaccine against swine influenza was developed and administered in some countries in 1976, although no pandemic in fact occurred. An experimental vaccine is being developed in response to the recent avian flu outbreak.

Diagnosis: Influenza infections can be diagnosed by serology using haemagglutinin-inhibition tests to detect antibodies during acute infections. More immediate diagnosis may be achieved by the direct detection of viral antigens in nasal secretions by inmmunoflourescence test. Diagnosis could also be done by polymerase chain reaction (PCR) or by antigen capture ELISA with monoclonal antibody to the nucleoprotein. Culture of the influenza viruses from nasopharyngeal secretions are preferred for further identification of strains.

WHO's Role in Influenza Control: An international network for influenza surveillance was first envisioned in 1947 and WHO became responsible for its administration when the Organization was founded in 1948. The Network now consists of 110 National Influenza Centres in 83 countries and the four WHO Collaborating Centres for Virus Reference and Research in Australia (Melbourne), Japan (Tokyo), the United Kingdom (London) and the USA (Atlanta). This network helps WHO monitor influenza activity in all regions of the world and ensures that virus isolates and information are sent rapidly to the WHO Collaborating Centres for Virus Reference and Research for immediate strain identification (see WHO Fact Sheet No 212 for more information; http://www.who.int).

For many years, the World Health Organization (WHO) has conducted consultations to review the currently circulating influenza virus strains worldwide and to recommend the appropriate vaccine composition to be used for the next season. Vaccines are specially recommended to the elderly people and people with chronic underlying diseases (e.g. cardiopulmonary, diabetes) and should be given as single shot. Two doses are given to young children with one month interval between doses.

The use of the antiviral drugs amantadine and rimantadine in the elderly and other high risk people may also be considered. These compounds have been shown to be clinically effective in preventing illness when taken throughout the period of exposure to virus in a normal epidemic or outbreak situation. They can also reduce the severity and duration of illness when taken early after appearance of symptoms. Two new anti-influenza drugs (Relenza and GS4104) have been developed that appear to be extremely effective by preventing the multiplication of the virus to a high degree. They provide protection similar to amantadine and rimantadine and resistance is less frequent.

WHO has developed a plan for the Global Management and Control of an Influenza Pandemic. Elements of this plan include augmented surveillance for and identification of potential pandemic viruses, dissemination of information, logistic and other support to national health authorities, and the promotion of high growth seed virus for vaccine and the facilitation of vaccine production and international distribution. Moreover, the Plan calls for each national health authority to develop its own national pandemic emergency response plan.

Two of the key constituents of WHO's plan for pandemics are surveillance and vaccine preparation. Surveillance is maintained throughout epidemic and interepidemic periods by the 110 national influenza centres. These centres are constantly isolating influenza virus from humans and animals so that emerging strains are rapidly identified. They provide human isolates to one of the three WHO Collaborating Centres, where virus is sequenced and genetically characterized. Some collaborating centres also deal with animal specimens. Results from the influenza network are reviewed each February and September and a recommendation for the antigenic composition of the next year's influenza vaccine is made to and adopted by WHO and then passed on to vaccine manufacturers.

WHO stimulates vaccine research on tissue culture and other methodologies for vaccine production to reduce the dependence on fertilized eggs (which are a constraint to vaccine production as the stock is limited) and consequently speed up production when urgent, unforeseen requirements make the provision of large amounts of vaccine necessary. Other developments, such as live vaccines and DNA vaccines, are alternatives that might be used in the future.