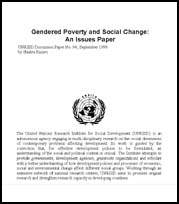 Kynch's (1998) analysis of gender and malnutrition in the north-west Indian village of Palanpur raises questions about how food entitlements (or command over food) are determined, and how men's and women's ascribed roles as producers, provisioners and reproducers affect their claims on each other, and in turn explain particular patterns of nutritional outcomes. Her contribution draws on the existing scholarship on gender-based entitlements (Sen, 1984; 1987; Agarwal, 1992), qualifying it in two significant ways.

First, as was noted earlier, the "gender reversal" in the nutritional status of adults versus their children that is thrown up by her evidence highlights the importance of having a dynamic perspective over the life cycles of men and women, and the well-being risks that men occasionally face. Second, in order to explain these contradictory outcomes, a tripartite division of food-related activities is introduced (producing, provisioning, reproducing) as opposed to the usual bipartite one (producing, reproducing). This helps clarify the complex motivations underpinning both men's and women's interests in provisioning and reproducing - altruistic concern for others, a concern for social status, as well as economic calculation and pursuit of self interest. It thereby avoids the simple dichotomy between female altruism versus male pursuit of self-interest which has been characteristic of some economistic models of the household. It also provides a better understanding of the nature of intra-household claims by drawing attention to, first, the interdependence and complementarities between the three spheres of activity (going beyond the simple "trade-offs"), and second, the ways in which moral claims and obligations can be structured by exclusive gendering of each sphere, and the detrimental impacts of this constraint on household food entitlement.

In terms of provisioning, women in this Indian community are ideologically, economically and socially excluded from the public sphere, and therefore from both some of the energy expenditure that a provisioner bears, and the reciprocity that provisioning offers. The argument of the paper is that while adult women may have been able to maintain an energy balance more easily than adult men who are burdened with energy-demanding agricultural tasks, the most devastating part of the rules of entitlement in this community is the effect on little girls who suffer severe setbacks in their growth process. Future provisioners (boys) are protected more than future reproducers (girls), even though current provisioners (men) may suffer more thinness than the current reproducers (women), probably because of the effort involved in meeting provisioning obligations. This helps to guarantee the continuity of the household, the patriline and its assets.

This argument has resonances with Sudha and Rajan's (1998) reading of the demographic trends in India. They argue that in the context of a patrilineal kinship system where marriages are arranged on principles of dowry and exogamy15 such as the one characterizing the northern plains of India, family strategies for amassing wealth, and transferring wealth intergenerationally, work through mobilizing kinship networks and manipulating the marriage of their sons and daughters in ways that pose survival threats for their female offspring. Although they provide evidence of women's collective activism and resistance against these practices, the conclusion that can be drawn from their analysis of sex ratios, and also from Kynch's (1998) village-level evidence on daughter disfavour, is that despite such forms of collective action the constraints on women at the household level remain very severe and their status is tied up with conforming to the social norms that deny them (and their daughters) agency.

15 Dowry is a transfer, in the form of money, gold and consumer goods, from the bride's parents to those of the groom. Exogamy is the practice whereby women are expected to marry into a family that lives in a different village from their natal one.

Gender-based entitlements in this context may fall in the realm of what Bourdieu refers to as "doxa" - that which is accepted as natural and self evident beyond discourse or argumentation - rather than being actively contested and negotiated (Agarwal, 1992). As Kabeer (1998) explains, in these circumstances it is not just difficult, but also dangerous, for individual women, isolated within their families, often cut off from the communities in which they grew up, to challenge the social norms that define them as lesser beings. Collective action in the public arena makes the project of social transformation an act of solidarity rather than individual self interest and is therefore likely to be effective in the long run - but the interlinkages between collective action and transformations at the individual level are complex, diffuse and unpredictable.

For Kynch (1998) too, gaining recognition as either a provisioner or reproducer can be part of individual strategy in building up bargaining strength within the household (what Kabeer refers to as "status"), and part of the argument of her paper is that over-specialization in reproducing can be a very risky strategy. Jackson and Palmer-Jones (1998) probe further the question of why gender divisions of labour take the particular forms they do, focusing on the effort-intensity of work as an important, but generally neglected, dimension. They argue that the energy-intensity of work has significant implications for gendered well-being, is central to women's and men's subjectivities, and therefore relevant to the moral claims they make on each other through processes of intra-household negotiation and bargaining.

Drawing on a number of different disciplines and sub-disciplines that address the issue of work intensity, they show that heavy work is likely to be objectively more burdensome to many women than men, in the sense that relatively small size and a female constitution can mean that the burden of effort intensive work is greater for women (i.e., it feels more burdensome), and an aversion to some forms of such labour may be expected. It may very well be that a woman, faced with such onerous and well-being threatening work, employs economic strategies (hire labour for the task), relational strategies (persuade a daughter-in-law, husband or child to do it) or technological strategies to reduce drudgery. Relationships are resources which can be deployed in this way, and ideologies of work such as discourses about strength and masculinity, or about endurance and femininity, may have real value to women in processes of negotiation and bargaining. The interesting observation made by Kynch (1998), that women in Palanpur were concerned that a metalled road could result in their being "pressured into petty trading" (p. 15, our emphasis) may indeed be indicative of what Jackson and Palmer-Jones (1998) refer to as women's aversion to work, and their strategies for building up "body capital". But even though women in this community may have been successful in reducing drudgery and thereby maintaining energy balance more easily than men, this seems to have been achieved at the cost of childhood under-nutrition, which may have harmed women in other ways.

For Kynch (1998), as well as for Jackson and Palmer-Jones (1998), the household is a central terrain where the gendered rules of entitlement (to work, rest and food) are negotiated and enforced, even though the implications of their analysis extend to other institutional arenas (labour markets in particular). One of the important contributions of Gore's (1993) critique of entitlement analysis was to highlight the fact that these moral rules are by no means limited to domestic institutions (family, household), as Sen's original formulation of "extended entitlements" would have it. "Sen's entitlement analysis", he argues, "marginalises non-governmental sites of rule-making and rule-enforcing which affect entitlement by either downplaying the role of socially enforced moral rules, or compartmentalising them to the domestic sphere. As a consequence, the interplay between the working of socially enforced moral rules and the working of state-enforced legal rules in determining a person's entitlement is ignored" (Gore, 1993:444). This is an important and useful observation not only for poverty analyses, but also for the gender analysis of poverty alleviation policies. It is arguable that some of the more interesting questions that a gender analysis of poverty would raise hinge precisely on this interplay between state-enforced legal rules and socially enforced moral rules, which extend beyond the domestic arena.