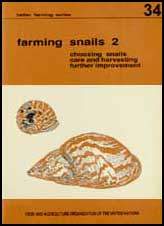 227. Perhaps the most important thing that you can do to improve your snail farm is to build a third pen.

228. Up until now, using only two pens, you have had to use both of them all of the time so that you could take fully grown snails from one after you had harvested the other.

229. Today, farmers know that it is not good to grow the same crops in the same place all of the time.

230. This is also true if you grow the same food and shelter plants in the same pen all of the time.

231. However, if you plant vegetables in one of your three pens for a year, the vegetables will grow well because of the snail manure in the soil. Afterwards, your food and shelter plants will also grow better because the soil has had a rest.

232. Also, if you raise snails in the same place all of the time, the sicknesses that they may get would do more harm year after year.

233. So, if you plant something else for a year or two and then start with snails again, they will be less likely to get sick.

234. The diagram below shows you how to improve a snail farm by planting a vegetable garden in each pen from to time.