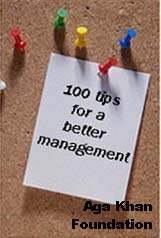 83. Don't be afraid to offend; just don't be offensive in your approach69

Give a lot, expect a lot, and if you don't get it, prune. Tom Peters, Management Expert

Great emphasis is placed on giving positive feedback. Yet sometimes a manager must discuss poor performance with staff and give negative feedback. When people make mistakes, and it is your job to correct them, remember that people may not always respond well to criticism.

What you can do is to deliver your criticism in a constructive way, that is:

84. Take care of mistakes when they are small; do not allow them to grow, they will get more complicated

Everyone makes mistakes. Depending on how a manager deals with mistakes, they can contribute to learning and building of responsibility, or they can serve to reinforce failure and negative attitudes. Help people identify the factors that contributed to the error, the possible repercussions and the best way to proceed.

A man who has made a mistake and doesn't correct it is making another mistake. (Confucius)

Try to respond to mistakes soon after they are identified. Correct mistakes when they are small to prevent them from becoming more serious in the future. Point out to the party involved that:

Anger is natural. It is OK to be angry once in a while. What is important is how you express it when you are angry and how you deal with an angry staff person. Anger is a severe reaction to frustration, a reaction to having our needs or desires blocked, particularly if we believe that the block is arbitrary or unreasonable.

If you are angry: Acknowledge it, determine what made you angry, and express your anger through the "RDA technique" (Resent, Demand, Appreciate), i.e.,

If one of your staff gets angry: Get the person away from co-workers, allow the person to express his or her anger, find out the facts, and identify the cause of the anger, and confront the problem.

Conflicts occur because of differences in beliefs or because authority is not clearly delineated, or just because people simply cannot get along. Don't take sides in a conflict, act as an arbitrator and listen to both sides, and evaluate the evidence as objectively as possible. Come to a resolution that is agreeable to both parties.

If you are involved in a conflict and tempers are running high, go somewhere to be alone until emotions cool. Avoid confrontation until you can communicate constructively.

Some suggestions to resolve a conflict: