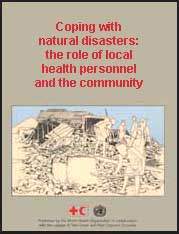 Every catastrophic event has its own special features. Some can be foreseen several hours or days beforehand, as in the case, for example, of cyclones or floods. Others, such as earthquakes, occur without warning. Whatever the type of disaster, for some hours the community and local health personnel have only themselves to rely on before outside assistance arrives. In a later chapter, this Guide will deal with organizing the community to manage the consequences of the disaster. Here it will confine itself to describing the steps to be taken by the community and the local health workers to carry out rescue work and provide emergency care immediately after the disaster has struck.

In most cases, despite their fear, people tend of their own accord to give assistance to their family, their neighbours and their friends and to take the injured to the health centre or local hospital. In the hours that follow, particularly when the danger persists, fear must be countered by issuing certain items of information or instructions (by using loudspeakers and mobilizing volunteers):

1 Instructions will vary according to the type of disaster. See Part III and annexes.

The dissemination of this type of information is one of the first tasks of the Emergency Committee2 which the local authority sets up immediately and which remains in permanent session to coordinate local action and information.

Generally, perceiving that the community is acting in a coordinated manner and that information is being circulated gives people a feeling that the situation is under control and in that way helps to control fear.

Panic is not a common reaction. It may occur when the disaster finds people crowded in an enclosed space (a place of worship, a cinema, etc.). In some cases instructions given over a loudspeaker (asking people to be calm, indicating where the exits are) may help to reduce the adverse effects of panic.

A disaster may result in people being:

· trapped under the ruins of buildings that have collapsed,
· buried under mud or landslides,
· cut off by floods or the blockage of communication routes.

These people must be reached and rescued. The rescue work will mostly be earned out spontaneously by relatives, friends and local volunteers.

Often it is essential to have available:

Groups of volunteers must be organized to reach families that live in isolated places.

Certain elementary rules must be observed:

· Do not trample over ruins.

· Do not move rubble before being sure of not causing further collapses of buildings or falls of material.

· Use manual methods for preference and handle spades and picks very gently and cautiously.

When it is difficult to reach a victim or when there is a risk of further caving-in, it is advisable to leave the work of extrication to experts (firemen, trained volunteers, building workers, the army, etc.). As soon as the rescuers reach an injured person, they should be careful to:

· Clear the victim's airways by using fingers to clean the mouth and throat, taking out dentures and loosening collars, belts and clothing.

· Use blankets to prevent the victim catching cold.

In order to locate those trapped under the rubble, an attempt must be made-with the help of those nearby or in the same building-to determine the number of people trapped and the places where they are probably to be found (stairwells, cellars, ramps, etc.). To find them, it is necessary first of all to obtain absolute silence and then to shout to them from different points in the ruins. If no response can be obtained, signals must be made, for instance, by knocking on pieces of metal pushed down into the rubble or by using loudspeakers. In the event of a response, contact must be maintained. The link with the person discovered is important: it is essential to talk to him and give him confidence. While the rescue workers are freeing the trapped person, those responsible for transporting him or her to the health centre or hospital will be preparing the stretcher.

The stretcher must be put down near the injured person. If no stretcher is available, one can be improvised with blankets, pieces of cloth or plastic, camp beds, ladders, doors, shutters, etc.

When lifting the injured person, certain rules must be followed:

· Movements must be calm and coordinated and carried out in accordance with the instructions of a rescue worker.

· The injured person must be moved as little as possible.

· The victim's head, neck and trunk must be kept in the same axis (see figure).

· The stretcher must go forward with the patient's head foremost.

· Jerkiness must be avoided (no sudden stops, bumps or tilting).

· No stretcher-bearer should walk backwards.

· The injured person, together with any ventilator equipment, must be fastened to the stretcher.

· If the victim is given artificial respiration (mouth-to-mouth, mask) the rescue worker responsible for it will get between the two shafts level with the victim's head; it is only in such a case, to avoid the rescue worker having to walk backwards, that the injured person will be transported feet first.

Reception at the health centre or hospital

The volunteers assisting the local health personnel organize the reception of the victims and those accompanying them at the health facility. It is essential to:

· Speak to those arriving, answer their questions and tell them where they can put themselves.

· Give them blankets if they are cold.

· Help them wash if necessary (people extricated from the rubble, people covered in mud, etc.) and give them tea or coffee.

· Look after the children.

· Identify the injured, giving priority to whose who are unconscious or are not accompanied by members of their families. The name of the injured person and the place he or she was brought from will be noted on a sheet of paper, which will be placed in a plastic cover, for example, and attached to the person concerned. When the victim's name is not known, a note must be made of the information supplied by the rescue workers, which can later make identification easier (place where the victim was found, the circumstances, other persons present, etc.).

Organizing the health centre or hospital to meet the emergency

As soon as possible after disaster has struck, all local health personnel should report to the health establishment where they usually work. The first task is to assess quickly any damage suffered by the establishment and its health facilities and to decide whether it can still be used or whether it would not be better to move its operational base to a less damaged building or to a temporary shelter (tent or other). If a move is necessary, a new health centre or hospital will quickly be established, use being made of any health equipment and material it has been possible to salvage.

Experience shows that during the first few hours it is above all relatives, friends and local volunteers who bring the injured to the health establishment. Preparations to receive them must be made by setting aside a space where the local health personnel can screen them to determine what care they require, while the volunteers concern themselves with receiving them on arrival.

When there are enough local health personnel to receive the injured at the health establishment, one or more health posts can be established where rescue work is being undertaken and at which first aid can be given to the rescued before they are carried to the health centre or hospital.

The local health personnel can also act before a victim is extricated, for example by applying a tourniquet when the person concerned has had a leg or arm crushed or has lost all feeling in fingers and toes (thus preventing the "crush syndrome").

When a large number of injured people are brought at the same time to the health establishment, the more expert among the local health workers, taking into account the equipment and professional skills available, must sort the cases into the following categories:

A. Those who must be sent urgently to the nearest properly equipped hospital. Among these two orders of priority may be distinguished:

A.1. Emergency cases that must be operated on within the hour:

A.2. Emergency cases in which it is possible to wait a few hours before operating:

B. Those given attention is given to the most serious cases among those with a chance of surviving: there are those who are attended to while waiting to be sent to a specialized centre and those who do not need major medical care and can be treated on the spot. The B group also includes very serious cases with no chance of survival that it would be pointless to move.

Victims can be transported from the local health establishment to a better-equipped hospital by local means of transport or, later, by means of transport (ambulances, cars, helicopters, ships, etc.) from elsewhere. The people in the community or from outside who deal with transport must know what hospitals can receive the injured. This information must be given to the community by the authorities at intermediate level or the national authorities. The local health personnel must also be prepared for the possibility of all communications being cut and being forced for a certain time to rely solely on their own resources and professional skills.

In many cases the local health personnel do not have available the specialists and resources needed after a disaster to treat all emergency cases on the spot. Often they are forced to confine their efforts to screening the victims and providing care for those who are able to survive without major medical assistance. In every instance the local personnel must be trained to receive the following medical emergencies:

The types of emergency vary according to the kind of disaster and how and when it strikes.

In earthquakes there is a high level of mortality as a result of people being crushed by falling objects. The risk is greatest inside or near dwellings but is very small in the open. Consequently earthquakes at night are more deadly. There are large numbers of injuries. During the night fractures of the pelvis, thorax and spine are common because the earthquake strikes while people are lying in bed. In the daytime injuries to the arms and legs, the collarbone and the skull frequently occur. There may be people in a state of shock and people suffering from bums (particularly in areas where electricity and gas are installed). Afterwards there may be surgical complications of fractures or infections of wounds.

In volcanic eruptions mortality is high in the case of mudslides (23 000 deaths in Colombia in 1985) and glowing clouds (30 000 deaths at Saint-Pierre in Martinique), may be injuries burns and suffocations.

In floods, mortality is high only in the case of sudden flooding: flash floods, the collapse of dams or tidal waves. Fractures, injuries and bruising may occur. If the weather is cold, cases of accidental hypothermia may arise.

In cyclones and hurricanes mortality is not high unless tidal waves occur. The combined effect of wind and rain may cause houses to collapse. A large number of objects may be lifted in the air and carried along by the wind. This may give rise to injuries, fractures, cuts and bruises.

In droughts, mortality may increase considerably in areas where the drought causes famine, in which case there may be protein-calorie malnutrition (marasmus, kwashiorkor) and vitamin deficiencies (particularly vitamin A deficiency leading to xerophthalmia and child blindness). In famine conditions measles, respiratory infections and diarrhoea accompanied by dehydration may bring about a massive increase in infant mortality. When people migrate and settle on the outskirts of towns and villages, poor hygiene and overcrowding may facilitate the spread of endemic communicable diseases (diarrhoeas, tuberculosis, parasitic diseases and malaria).