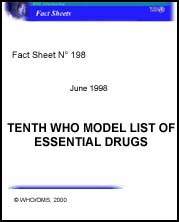 A World Health Assembly Report of 1975 recognised the urgent problems of lack of essential drugs in many countries, and provided the impetus for the first WHO Model List of Essential Drugs, published in 1977. Since that time, the concept of essential drugs has been widely applied. It has provided a regional basis not only for drug procurement at national level but also for establishing drug requirements at various levels within the health care system.

Essential drugs are those that satisfy the health care needs of the majority of the population and should therefore be available at all times in adequate amounts and in the appropriate dosage forms. This definition remains as valid today as it was 20 years ago.

The choice of such drugs depends on many factors, such as the pattern of prevalent diseases; treatment facilities; training and experience of the available health care personnel; financial resources; as well as genetic, demographic and environmental factors.

Since 1975, there have been nine reports in total, each one updating and improving the list and providing guidelines on selection and use. Because of differing views on the definition of an essential drug in terms of what is meant by the "health care needs of the majority", the list has been gradually expanded since its introduction and has evolved with changing health needs and therapeutic options.

Over the 20 years 166 new drugs have been added while 68 drugs have been deleted, resulting in an overall increase from the original 208 to 306 drugs after the last Expert Committee meeting, which took place in December 1997.

Each selected drug must be available in a form in which adequate quality can be assured and its stability under the anticipated conditions of storage and use must be verified.

Where two or more drugs appear to be similar in the above respect, the choice between them should be made on the basis of a careful evaluation of their relative efficacy, safety, quality, price and availability.

The WHO List of Essential Drugs is a model, to guide countries and health services in developing their own national and local lists. Such lists should be evidence based, considering prevalent diseases, treatment facilities, training and experience of health personnel, financial resources, genetic factors and demographic factors.

The concept of essential drugs has been disseminated and promoted extensively at the country level by WHO's Action Programme on Essential Drugs, as well as by disease control programmes in WHO, international and nongovernmental organisations throughout the world and bilateral agencies.

Over the last 20 years the WHO Model List has proven to be an invaluable tool for saving lives and improving health through more rational use of drugs, wider access to drugs, and improved drug quality.

In the preparation of the Tenth WHO Model List of Essential Drugs which was recently published in WHO Drug Information, vol. 12, No 1, priorities were to "fine tune" the list in the light of the latest evidence, to correct any major omissions and to address drug treatment issues for some of the major health priorities today, including the problem of antibiotic resistance, asthma and diabetes.

One important advance in the new Model List is the addition of a new drug, triclabendazole, for the treatment of liver and lung flukes. This illustrates the way the List can be used to highlight a therapeutic need and speed up availability of new drug treatment.

AIDS treatment was also addressed and zidovudine (AZT) has now been introduced into the WHO Model List of Essential Drugs for the specific treatment of HIV-infected pregnant women in order to reduce mother-to-child transmission and to protect the new-born baby.

A further note on triple therapy in HIV/AIDS was also included to the effect that it was a new therapy beyond the budgets of most National Drug Programmes and must be decided at country or institutional level. However, several drugs were added for the treatment of opportunistic infections.

The WHO Model List of Essential Drugs is considered to be as an informational and educational tool for professionals and consumers. Since concern about health care costs is now a priority even in developed countries, the Model List is of greater importance than ever as an aid to developing treatment guidelines, national formularies, consumer drug information, and other measures to improve drug use.

The List also serves as the basis for WHO model drug information, a new model formulary, and basic drug quality tests.

The List should be seen in the context of national drug policies which address not only drug use, but also procurement and supply strategies, drug financing, drug donations, and research priorities.