A. The political background

'With a per capita income of under US$ 170, Uganda today is one of the poorest countries in the world: indeed, it is a living testament of the havoc caused by the political turmoil and economic decline brought about by more than a decade of despotic rule.'

This is the verdict on Uganda that begins the World Bank survey of Uganda, entitled Growing out of Poverty, published in 1993. After being a British protectorate for 70 years, Uganda gained independence in 1962. At that time, the country had much going for it. It was one of the most vigorous and promising economies in sub-Saharan Africa. It had a good climate and fertile soil: it was self-sufficient in food, and its agriculture, along with textiles and copper, earned enough foreign exchange to pay for imports and still show a surplus. Savings stood at 15 per cent of GDP, enough to finance a reasonable level of investment, and the country had a good system of roads, railways and air transport. But in 1971 the first president, Dr Milton Obote, was overthrown by a military coup lead by General Idi Amin.

'The Amin regime radically reversed the economic and social progress attained since independence, and the ensuing civil strife resulted in tremendous loss of human life. It is estimated that as many as 500,000 Ugandans lost their lives during Amin's eight-year dictatorship and as many as one million more were internally displaced from their homes and farms,' says the World Bank. Amin was eventually deposed, but this was not the end of Uganda's troubles. Dr Milton Obote resumed power in 1980, but according to the London-based Independent newspaper,

'The 1980 election, now widely regarded as fraudulent, resulted in the return of Milton Obote... [but] the country was plunged into a barbarous civil war which exceeded any atrocities committed during Idi Amin's rule.'

The toll taken by two long periods of civil strife was terrible. Skilled people left the country, Uganda's GDP declined by 25 per cent in the decade 1970 to 1980, exports by 60 per cent, and inflation rose to 70 per cent a year, under the pressure of heavy military spending and bank borrowing. In particular, government spending on education and health had by 1985 sunk to 27 per cent and 9 per cent of the levels of the 1970s.

This literal decimation of health expenditures was all the more disturbing because at independence Uganda's social indicators were as good as, or better than, most of Africa, with a good health service that had pioneered many low cost health and nutrition programmes. There was an organised network of vaccination centres, and an immunisation programme that reached 70 per cent of the population.

By early 1986, when the National Resistance Army (NRA) and its political wing, the National Resistance Movement (NRM) took power, the country was in dire straits. The NRA leader, Yoweri Museveni, was declared President and the NRA quickly took control of the country except for sporadic resistance in the North and East. But the infrastructure and the economy had been destroyed by the fifteen years of civil war and mismanagement. The roads were in disrepair (journeys of 80 km took over two hours), the railways were not working, telephone lines were destroyed, water mains and pumping stations were broken and the electrical supply was irregular, inconsistent and dangerous due to inadequate generation and overloaded transformers and distribution lines.

Government pay was six months or more in arrears and inadequate to provide the necessities of life. Government workers worked either a few hours a week or not at all. If they came to work there was nothing to do. To survive they had to spend as much time as possible growing food and working in what was left of the private economy.

The new government soon achieved the confidence of European and other Western governments. With emergency aid major roads were rebuilt and the utility services underwent a complete survey and essential repairs. Health care services were revived as far as possible, and health expenditures began to increase again. But the task of rebuilding the nation was immense.

B. The health of the nation

Over half of Uganda's 17 million population, even under peacetime conditions, still falls below a basic poverty line. Life expectancy, at 47 years for men and 50 for women, is one of the lowest in the world. The country's crude death rate, at 20 per 1,000, is about twice the level of the average low-income country, for example, neighbouring Kenya. Over half of hospital deaths are children, the main killers being malaria, pneumonia, diarrhoea and malnutrition. Nearly half the children under 5 years of age suffer from malnutrition. For adults, the main causes of death are AIDS, tuberculosis and malaria. 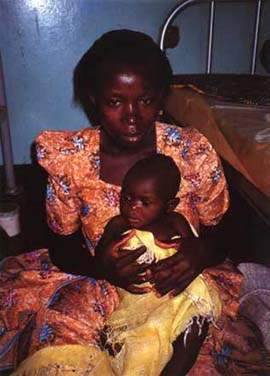 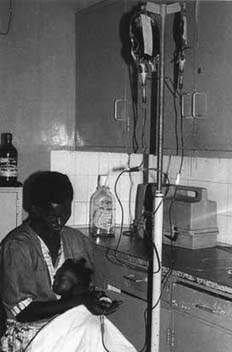 'The leading causes of death are all preventable, although with varying degrees of difficulty,' comments the World Bank. One difficulty is the inadequate number of nurses and doctors - see the table. There are only around 90 hospitals for the whole country. Another problem is the health budget. Total health spending in Uganda, public and private added together, is about US$ 6 per head of population, which is a half to a third of what sub-Saharan countries in general spend, and half of what is considered necessary to provide a basic essential health service in a low-income country. Uganda's health problems are compounded by a high fertility rate and so a high population growth rate. But the toll this exacts on Uganda's mothers is high, with 550 maternal deaths per 100,000 live births, about twelve times the rate in developed countries. On top of all this came 'slim disease,' as Ugandans graphically describe the AIDS epidemic which hit the country.

It is important to realise that, like so much else in Ugandan life, the country had a distinguished history in blood transfusion before the time of troubles set in. The British Red Cross Society, Uganda branch, began a blood donor and blood bank programme as long ago as 1958. The Red Cross world-wide is a major contributor to blood donation, providing a quarter to a third of the world's blood supply and about half of the US blood supply. In 1958 the Ministry of Health opened a blood bank laboratory in a wooden hut at Old Mulago Hospital in Kampala. When the New Mulago hospital was opened in 1962, the European and Asian Hospital on Nakasero Hill in Kampala was closed and the Nakasero Blood Bank (NBB) opened in the building that had been the nurses' home. This blood bank developed rapidly to supply all the blood needed by the Kampala hospitals (Mulago, New Mulago, Nsambya, Mengo and Rubaga) and also provided blood, when possible, to other hospitals in Uganda.

By 1974 it was collecting and typing 14,000 units annually (4,000 from voluntary donors recruited by the Uganda Red Cross). The blood bank made its own collecting and giving sets and used resterilised bottles and resharpened needles. The laboratory underwent frequent enlargements and had to add two wooden buildings to accommodate offices and an antenatal screening programme. The space available amounted to a grand total of 320 square metres. The staff rapidly increased, reaching a peak of 120 in 1974. In 1972 Paul Senyonga, who had received specialised training in London, England, and Melbourne, Australia, became the chief technologist in charge. He is in fact still there in 1995. But the years 1976-1986 were years of great difficulty, as everywhere else in Uganda, and the Nakasero Blood Bank declined dramatically. Funding was inconsistent, inflation was drastic (the exchange rate rocketed from 7 Uganda Shillings to 16,000 to the US$), yet the staff salaries remained the same at 2,000 Uganda Shillings for the unskilled rising up to 20,000 Uganda Shillings for the doctor in charge, per month. British aid and the German Red Cross assistance were diverted to other purposes; two mobile blood banks, lavishly fitted out, were supplied by the German Red Cross but never found their way to the NBB.

As stocks of supplies lasted and the staff could find transport, blood collection continued, but each year less and less was provided to the hospitals. The voluntary blood donors became fewer and fewer and hospitals were forced to provide their own blood needs. The mission hospitals, with the advantage of donated supplies, were more successful than the government hospitals in being able to keep up a supply of blood. Hospitals used many different donor recruiting methods but the most frequent was requiring obstetric and surgical patients to provide two blood donors before admission. During the early 1980s resterilisation of blood bottles became very difficult and hospitals began to use imported blood bags whenever they could be obtained.

Management of emergencies became extremely difficult because blood was never ready in the blood bank. If suddenly a severe haemorrhage occurred as a complication of labour or a child was brought in with severe anaemia and cardiac failure, blood would take anywhere from 6 to 12 hours to get, the time needed to solicit blood from relatives, most of whom would not have come with the patient, cross-match and issue it. By this time the patient would either have died or did not need the blood.

The effect of the HIV epidemic was not long in showing itself. By 1986, 9 per cent of all blood donated at the main Mulago teaching hospital in Kampala was positive for HIV. This seroprevalence had risen to 24 per cent in the same population by 1989. Testing blood for HIV-1 before transfusion did start in the main hospitals in Kampala in the last quarter of 1986. This testing was, however, still irregular and because of shortage of blood most emergency transfusions were carried out before the blood could be tested.

It also became apparent that the individuals who were donating blood at the time were not the most suitable. Relatives, when asked to donate blood for the patient, would often go out and find a paid donor to donate. Many donors were recruited, for a fee, by touts working at the hospital gates. These paid donors happened to be the sort of individuals most likely to be HIV positive. It is therefore most likely that before the Uganda Blood Transfusion Service (UBTS) became fully effective again, a lot of patients received HIV infected blood.

The mission hospitals, notably Nsambya, acquired facilities for Elisa tests and started testing blood donations for HIV in 1986, with emergency help from the EC. From 1987 blood donations collected at New Mulago hospital and at the NBB could be tested at the Institute of Public Health with kits donated by the WHO. But HIV testing was not available for the majority of hospitals in other towns in Uganda. Some hospitals in those towns were able to send blood samples to Nsambya hospital, the IPH at Mulago, or the Virus Research Institute at Entebbe. But even so the blood frequently had to be used before the test results were available.

Then in May 1987, the Uganda government with assistance from the World Health Organisation held a donors conference in Kampala to solicit funds for AIDS control. At this conference the EC pledged support for a phased safe blood programme, with a first phase objective of providing 10,000 units of safe blood for hospitals in the Kampala/Entebbe area. How the EC came to make this pioneering intervention, is described in Chapter Four.