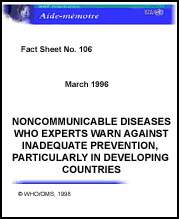 WHO Experts Warn Against Inadequate Prevention, Particularly in Developing Countries

Experts of the World Health Organization (WHO) have expressed their concern over the potential perils of inadequate attention to the prevention of noncommunicable diseases (NCDs) both in developed and, especially, in developing countries.

Their forewarning came in a recent internal report of the WHO Consultation on the integrated prevention and control of NCDs, which was held in Geneva in December 1995, and brought together experts in noncommunicable diseases from the Organization's headquarters and regional advisers from the six WHO regional offices covering the entire world.

WHO professionals stressed that there existed today a discrepancy between the ever-growing burden of the global health, economic and social consequences of NCDs, on the one hand, and inadequate attention towards their prevention, particularly in developing countries, on the other hand.

One glance at available mortality statistics will allow one to grasp the magnitude of the worldwide problem of NCDs, though mortality statistics alone do not provide a full picture of the global social and economic burden of this group of diseases: many NCDs cause human suffering for a long time before they kill.

According to WHO estimates, all NCDs, in many cases preventable, account for at least 40 % of all deaths in developing countries and 75% in industrialized countries, where cardiovascular diseases (CVDs) are the first cause of mortality and cancer is the third one.

NCDs have a major impact on health economics. Once developed, they are costly to treat. According to the American Heart Association, in 1996, CVDs in the U.S.A. will cost US $ 151.3 billion, including medical treatment and lost productivity from disability. Diabetes mellitus alone, which affects some 100 million people worldwide, claims on average around 8% of total health budgets in industrialized countries.

There is still a wide-spread misconception that the problem of NCDs is not relevant for the developing world, that it is a burden of affluent societies only. WHO experts say that scientific evidence testifies to the contrary: In developing countries, out of a little more than 39 million deaths, which occurred in 1993, more than 10 million were caused by the major NCDs. These statistics do not include deaths due to nutritional, gastro-intestinal, endocrine, neuro-psychiatric, sense organ, and genito-urinary diseases which account for an additional 3 million deaths in the developing countries each year.

Surveys of indigenous populations in a number of African countries indicated that hypertension rates are on the rise, as is the prevalence of diabetes. In a large percentage of affected individuals both conditions are being left untreated. In Seychelles, hypertension affects 22 % of the population; in South Africa - 16 %; in Mauritius - 14 %. Diabetes affects from 4 to 15 % of the population of the three countries. In Tanzania, the prevalence of major NCDs in the urban population is four times higher than in the rural one, 12.8 % to 3.1 % respectively. In Africa as a whole, rheumatic fever and rheumatic heart disease are major causes of premature mortality and account for one third of all cardiac diseases admitted to hospitals. In addition, recent studies make it possible to suggest that about 14 % of the African population have a sickle cell gene which considerably increases their chances of having children with this disorder.

In South East Asia, with an average life expectancy of about 60 years, CVDs and cancer are now the two leading causes of mortality. Hypertension has been found in India, Indonesia and Thailand to affect up to 15 % of the population. Diabetes, while low in rural areas, reaches industrialized-country proportions in urban populations. Up to 20 % of the population in some countries of the region carry a potentially significant haemoglobin mutation that could lead to life-long adverse health consequences.

The Eastern Mediterranean region is a classic example of countries in the midst of epidemiological transition: increasing rates of obesity, accompanied by a growing prevalence of hypertension and diabetes. Another feature of the region is elevated rates of consanguineous marriages which are associated with high risk of genetic disorders.

In China, the biggest country of the WHO Western Pacific region, there is high prevalence of cancer and CVDs with extremely high mortality rate from stroke. In 1993-94, among urban Chinese men between 25 and 30 years of age, for example, the incidence of cardiovascular disease was 450 per 100 000 inhabitants, while among urban women the corresponding figure stood at 336 per 100 000.

In absolute figures, the major noncommunicable diseases - CVDs, cancer, diabetes, chronic respiratory diseases and hereditary disorders - are responsible for some 19 million deaths worldwide annually, with both the developed and developing world sharing the burden more or less equally.

As life expectancy increases and fertility rates decline, the overall burden of NCDs is expected to increase, especially in developing countries. Even today, many of them are already facing double affliction: the newly-emerging health problems of an ageing population, and continuing high rates of communicable disease.

Given the present trends, scientists project an explosion of noncommunicable diseases in developing countries between now and the year 2015. By then, for example, the ratio of deaths from NCDs to deaths from infectious and parasitic diseases will be 1:1 in Africa both for male and female, 1:1 and 2:1 respectively in the Middle East, 4:1 and 4:1 in Asia, 6:1 and 4:1 in Latin America. According to these projections, in developing countries in general three times more people will die from NCDs than from infectious and parasitic diseases.