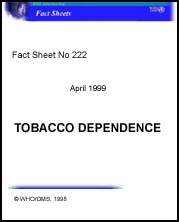 Tobacco kills. A long-term tobacco user has a 50% chance of dying prematurely from tobacco-caused disease. Each year, tobacco causes some 4 million premature deaths, with 1 million of these occurring in countries that can least afford the health-care burden. This epidemic is predicted to kill 250 million children and adolescents who are alive today, a third of whom live in developing countries. By the year 2030, tobacco likely will be the world’s leading cause of death and disability, killing more than 10 million people annually and claiming more lives than HIV, tuberculosis, maternal mortality, motor vehicle accidents, suicide, and homicide combined.

Tobacco products are highly addictive. Because tobacco products are carefully designed to undermine efforts to quit using them, quitting is not simply a matter of choice for the majority of tobacco users. Instead, it involves a struggle to overcome an addiction. Tobacco use typically is woven into everyday life, and can be physiologically, psychologically, and socially reinforcing. Many factors combine with tobacco’s addictive capacity to make quitting difficult, including media depictions and cultural and societal acceptance of tobacco use.

Quitting tobacco at any point in life provides both immediate benefits and substantial long-term benefits to health. No amount of tobacco use is safe. Abstinence from tobacco products and freedom from exposure to second-hand smoke are necessary for maximizing health and minimizing risk. Effective treatment for tobacco dependence can significantly improve overall public health within only a few years.

The currently available, proven treatment methods work. Hundreds of controlled scientific studies have demonstrated that treatment can help tobacco users achieve permanent abstinence. Effective treatment can involve a variety of methods, such as a combination of behavioural treatment and pharmacotherapy (nicotine replacement and non-nicotine medications). Population-based methods such as telephone helplines and national and international tobacco-free days also can help deliver treatment.