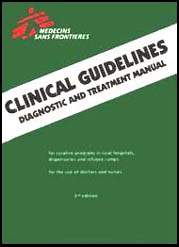 - More than 15 days for the other three forms.

- Uniquely due to Falciparum

- Associated, in varying degrees, with the following clinical signs

Due particularly to Falciparum, sometimes Vivax. Usually in children.

Necessary to make repeated staned slides as the protozoa are less numerous.

Diagnosis is made by presence of protozoa in the blood: thick and thin slides should be made in endemic zones for every fever > 38.5°C.

Note that blood films may be negative, even in a severe attack
(pernicious) because of sequestration or parasites in the deep capillaries.

· Tablets 100 to 500 mg
Indications: following IV treatment or a final trial (except in pregnant women inzones of multiresistance).
Side effects: tinnitus, rarely giddiness, nausea, vomiting.
Not recommended for prophylaxis.

· Ampoules: available from 60 mg to 300 mg/ml. Never by IV, either infusion or IM (although IM injection can be given in cases absolute necessity, numerous complications can occur: sciatic nerve paralysis, muscle necrosis, infection).
Indications: try to reserve quinine by injection for serious cases of malaria.
No contraindications.

· Ampoules 40 and 50 mg base/ml. Never by IV, either IM or SC or infusion.
Note: the doses for injection are weaker than oral doses.
Indications: severe vomiting or serious chloroquine-sensitive malarial. No contraindications.

· Tablet 200 mg
Active against some chloroquine-resistant varieties. Abandoned because of its toxicity (agranulocytosis, hepatitis).
Must not be used for prophylaxis.

· Tablet with 500 mg of sulphadoxine + 25 mg of pyrimethamine, orally

Indications: treatment of simple attacks of Falciparum (in zones of intermediate resistance as 1st or 2nd choice.

Should be abandoned as prophylaxis. Not to be given in association with chloroquine (antagonism) or with mefloquine.

Its use for prophylaxis is limited by its side effects.

Tablets should be taken with a fatty accompaniment
Indications: simple attacks of multiresistant Falciparum (as 1st choice in zone III, as 2nd or 3rd choice elsewhere)

Indications: associated with quinine in areas where the Plasmodium

Falciparum is becoming less sensible to quinine (zone III), use only in severe malaria when the patient is able to swalow.

Cannot be used as prophylaxis.

· Tablet 100 mg
Only usable for prophylaxis in association with chloroquine including pregnant women and children.
Very few side effects. No contraindications.

· Tablet 15 mg
Indications: avoidance of relapses of Vivax and Ovale. Toxic: methaemoglobinaemia, haemolysis where G6PD deficiency exists
(common in Africans,Asiatics and those of Mediterranean origin).
Contraindications: pregnancy and in G6PD deficiency.
In practice, few indications (expatriates leaving an endemic zone or where demanded by national rules, especially as resistance to it has been described).

- Before speaking of resistance, verify:

· that treatment has in fact been taken,

· that the correct dose for weight has been prescribed,

· the absence of important diarrhoea and whether there has been vomiting within one hour of taking medication,

· the expiry date of the medication,

- There must evidently be a Falciparum positive blood slide on the first and third days of treatment, slides which have been theoretically quantified. There is no chloroquine resistance with
P. Vivax, Malariae or Ovale.

- If resistance is suspected, follow the recommendatios for the country concerned.

WHO has done in vivo testing which is rarely possible in routine practice.

- WHO classifies resistance to chloroquine into 3 types. Schematically:

· Early and late R 1: total disappearance followed by reappearance of the parasite

· R 2: noticeable fall without diseappearance of the parasite

- Zones of resistance: see map. There is resistance to chloroquine almost everywhere where Falciparum rages and is more or less frequent depending on the country. Schematically, 3 zones can be distinguished:

- Resistance to sulphadoxin-pyrimethamine (Fansidar), although less frequent, has for several years followed closely the distribution of chloroquine resistance. Very extensive in South East Asia and Brazil.

RESISTANCE TO QUININE AND MEFLOQUINE

Treatment of primary or uncomplicated attack

- Always use national guidelines. This is essential in countries where drug resistance occurs.

- For Vivax, Malariae, Ovale and for Falciparum in zone I (chloroquine-sensitive):
chloroquine.

· either chloroquine as first choice (eventually 10 mg/kg on D1, D2 then 5 mg/kg on D3, D4, D5) and in case of failure, sulphadoxine-pyrimethamine:

- For Falciparum in zone III

· either mefloquine
Adult and child: 15 mg/kg then 10mg/kg 8 hours later; repeat the dose if vomiting occurs less than one hour after medicament taken.

In children, if the temperature is lowered before taking the medicine (antipyretics, cold bath), this will decrease the frequency of early vomiting.

· or (especially in pregnancy): quinine: 30 mg/kg/d divided in 3 doses x 7 days
in association with tetracyclin:

Tetracyclin is usually contraindicated in pregnancy or breast feeding and children < 8 years, but the vital risk serious malaria makes this a secondary consideration.

It should be reserved for cases where resistance has been proven.
The ingestion of halofantrine concurrently with fats doubles or trebles its absorption.

- Quinine as an infusion remains the treatment of choice in every zone. Commence with a loading dose of 20 mg/kg in an isotonic solution (if possible 5 % glucose) over 4 hours, then 10 mg/kg every 8 hours (or better, 4 hours with quinine, 4 hours through indwelling venous needle), until such time as the patient can swallow. Then change to oral medication for the remainder of the 7 days.

- SIf the patient has received quinine or mefloquine in the previous 24 hours without vomiting a loading dose will not be given (cardiac toxicity).

- If injection is not possible, use quinine IM in zones II or III in the same doses.

- In zone I, chloroquine as IM (antero-lateral thigh) or SC can be used in place of quinine. Dosage: 3.5 mg base/kg every 6 hours or as an infusion: 10 mg/kg in an isotonic solution over 8 hours, then 5 mg/kg/8 hours. Transfer to oral therapy as soon as possible. The total dose should be 25 mg/kg.

- Convulsions: diazepam IV or IR (see "Convulsions"). For prevention, use with phenobarbital.

- Infusion: guard against excessive hydration if not sure of the integrity of renal function. Do not exceed 2,000-2,500 ml/days in adults and 40-50 ml/kg in children, except where there is presenting dehydration which needs to be corrected.

- Transfusion where there is profound or porrly tolerated anaemia (Hb < 5 mg/ml or haematocrit < 15 %). Check for HIV if possible.

- Safe position and nursing in case of coma, nasogastric feeding.

- Record urine output: if < 400 ml/day in adults or 12 ml/kg/day in children; regard patient as anuric. This normally requires fluid restriction. To avoid decreasing the perfusion rhythm and therefore the planned doses of quinine, attempt to initiate a diuresis with frusemide IV (ampoule 10 mg/ml, 2 ml) at the rate of 2 ampoules of 20 mg as required (do not exceed 250 mg in 100 ml of 5 % glucose administered over 20-30 minutes in adults; in children, the dose is 1 mg/kg/inj. repeated every 4-6 hours depending on the evolution).

- Hypoglycaemia: when an doubt, especially in children or pregnant women, give 20-50 ml of 30 % or 50 % glucose. Hypoglycaemia often relapses. In practice, in children, the perfusion of 80 ml/kg/day of 5 % glucose prevents the hypoglycaemia induced by quinine.

Specific case: treatment of a simple infection in a non-immune subject (expatriate) and in pregnant women

· In sensitive zones: chloroquine.
either

- In sensitive zones: chloroquine
- In resistant zones: quinine (follower by mefloquine if this fails)

- Reserved for expatriates, and depending on the national protocol, for pregnant women.

- Depends on the region to which they are going: see the maps which follow.

- Depends on the length of stay, the season (transmission or not), the presence or absence of resistant Falciparum.

- Protection against anopheles:
These measures must assume increasing importance:

- Chemoprophylaxis: does not prevent infection with malaria but may avoid a serious attack. Commence the eve or day of departure and always continue for 6 weeks after return.

· In zone III
Several possibilities depending on the situation. There is no 100 % efficacious drug. nor any without side-effects.

either take mefloquine 250 mg (1 tab) 1 time/week only during the transmission season, or throughout the entire stay if this does not exceed 12 weeks; or where the stay does not exceed 1 month, take doxycyclin 100 mg (= 1 tab) each day, every day;

or take nothing, but carry at all times an effective treatment (mefloquine, halofantrine, quinine) to be taken if any symptoms suggestive of malaria appear.

Check with microscopic examination of the blood any time this is possible.

- Prophylaxis with sulphadoxine-pyrimethamine must be abandoned.

It is necessary to carry further the battle against the anopheles mosquito, since mass chemoprophylaxis is no longer recommended (development of resistance, slowing or suppression of protection), except in pregnant women.