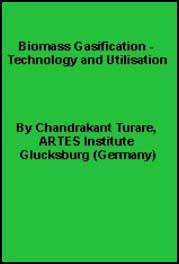 There is significant difference between diesel and spark ignition engine system with respect to it´s suitability for producer gas. In diesel engine, diesel is injected at the end of compression stroke and get ignited immediately without any spark ignition. This will not the case with producer gas- air mixture. In fact, diesel engine cannot operate alone on producer gas as temperature and pressure is not sufficient to ignite gas-air mixture. Hence, during the injection of producer-gas mixture, some quantity of diesel is also injected in combustion chamber.


In gasoline engine, air-fuel mixture is sucked during suction stroke and mixture is ignited with a spark at the end of compression stroke. Gasoline engine running on producer gas can operate on producer gas alone without any injection of gasoline. This is certainly convenient in remote rural areas, where gasifier-engine system is used for power or electricity generation. In general, low speed engines with large displacement and combustion place have advantage over today´s comact and high speed engines.

Unaltered gasoline engine run with producer gas experiences the power loss of 30-50% depending upon the producer gas quality.

- Dual fuelling on continuous basis, meaning small amounts of gasoline with gas-air mixture
- Starting the engine on gasoline and then switching over to producer gas drive
- Dual fuelling when additional power is needed to overcome the load, for instance, on hills