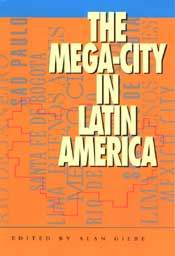 Current road conditions and the state of public transport are perfect examples of the urban disorder that rules in Lima today. During the 1980s, there had been signs of hope. More investment was put into transport than into any other sector. With the newly elected municipal authorities attempting to improve traffic conditions, the road system improved in leaps and bounds. A World Bank loan helped the Municipality of Lima to build new roads and to pave or repave 100 kilometres of existing road. Paved roads reached most settlements, including the larger "young towns." The principal problem was how to handle the massive amount of traffic in the city without saturating the main roads. Lacking adequate funds, the Municipality of Lima was unable to build enough road interchanges or to improve the system of traffic lights. International loans could not be used because these were cut in 1986, when the national president insisted on the construction of an electric train system in the city and, as a result of this project, the Municipality of Lima could not comply with the terms of its contract with the World Bank. The construction of three new road interchanges in the last six years has helped, but any real improvement has been hampered by the fact that road spending has been cut by the national government's attempts to cut municipal funding.4

The system of public transport has been in progressive decline since the 1970s. Long-term municipal plans to reorganize mass transport in the city were rudely interrupted by the imposition of the electric train project in 1986. The national president established a new authority to "plan" and operate the new railway, and building work commenced in the absurdly short period of nine months. Ten kilometres of line were built in the south of the city between 1986 and 1990, but the line has still not been completed and is currently out of service.

Public transport in Peru is mainly in the hands of large numbers of small enterprises. They operate fleets of small vehicles which are rarely well maintained. In Lima, the bus routes are poorly planned and have grown haphazardly in response to changing demands for transport. During the 1990s, economic restructuring has brought several important changes. First, with the lowering of import tariffs, large numbers of new vehicles have been imported. The number of public transport vehicles in Lima increased from 7,000 to 27,000 between 1990 and 1993. While this has helped modernize some of the fleet, new legislation has also allowed the import of used vehicles, and even used lyres, into the country.5 The result is that there are far too many small vehicles on the roads. Second, large numbers of unemployed workers have set up in business, driving the newly imported taxis and "combis." Unfortunately, few of these drivers have been properly trained and the municipal authorities estimate that only half hold a driving licence. The huge expansion in unauthorized taxi services has increased the rate of accidents and has also led to frequent attacks on passengers by drivers. The "combis" are even worse than the taxis and the police estimate that 40 per cent of road deaths in Lima involve such a vehicle.

Public transport in the city is in chaos because the authorities no longer exert any real level of control. The standard of driving has deteriorated as the numbers of vehicles have increased. People park their vehicles where they want and no-one prevents illegal parking. In terms of transport, Lima appears to have become ungovernable (see also chapter 5).