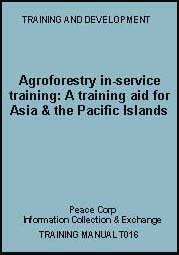 Previous trials indicate that two spatial systems of agroforestry- alternate rows and alternate strips - are most effective in minimizing erosion and in conserving the soil on hillside farms. The principal requirement is that the rows or strips of planted trees must be across the slope or along contour lines in order to be effective slope stabilizers.

One problem faced by farmers is how to draw the contour lines first so that they can establish the tree rows or hedges along those contours and make sure that all trees along each row are planted on the same elevation, as shown in Appendix Figure 1.

There are accurate instruments for leveling such as hand-held levels or tripod-mounted levels used in surveys by geodetic engineers. There is also the carpenter's level. However, these are generally unavailable to, and too complicated for the farmers. What is needed is a simple instrument that can be easily built and conveniently and accurately used by the farmers themselves. The A-frame is one such tool. Following is an outline of instructions for building and using an A-frame.

I. How to Build an A-frame.

(Note: A contour is a line that connects points at the same elevation on a slope.)

b. Sufficient length of twine or string or wire (or nails) for fastening the poles together.

c. A piece of rock of about 5 cm diameter to be used as a weight or plumb bob.

d. A 2-meter string to hold the plumb bob.

a. Lay on the ground the three poles (or pieces of lumber) as shown in Appendix Figure 2.

b. Tie (or nail) the poles firmly together as shown in Appendix Figure 2 to form an "A."

c. Attach the rock firmly on one end of the string.

d. Tie the other end of the plumb bob string to the top of the A-frame such that when the A is standing, the hanging rock or plumb bob is below the horizontal bar but not touching the ground.

3. Prepare the A-frame for use.

a. Hold the A-frame erect on approximately level ground such that leg A is on point 1, while leg B is on point 2, as in Appendix Figure 3.

b. Mark the point where the plumb bob string touches or crosses the horizontal bar.

c. Reverse the position of the A-frame so that leg A is placed on point 2 while leg B is on point 1.

e. Measure the distance between the first and the second marks on the horizontal bar and make the third or middle exactly between them, as in Appendix Figure 4.

f. The A-frame is now ready for use. If it is held erect such that the plumb bob string touches the middle mark, the points where leg A and leg B are standing on are of the same level or elevation.

Appendix Figure 3. Preparing the A-frame for use.

Appendix Figure 4. Making the middle mark on the horizontal bar of the A-frame.

II. How to Use the A-frame for Tracing a Contour Line on a Slope.

1. Mark point 1 (where you want to start the row of trees) on the slope. Place leg A of the A-frame on that point.

2. By trial and error, find the proper location of leg B (without moving leg A from point 1). When the plumb bob string coincides with the middle mark on the horizontal bar, mark the location of leg B as point 2. This is on the same level as point 1. (Caution: When the wind is strong, it may push the plumb bob string from the vertical line and the A-frame may give wrong results. To avoid errors, shelter the plumb bob from the wind or avoid using the frame on windy days.)

3. Transfer leg A to point 2 and use the same process as in step 2 to locate point 3.

4. Continue the process until a series of points are established on the slope. All these points have the same elevation, and a line connecting these points is a contour. A row of trees planted along this contour line is a contour hedge.

5. Establish the next contour line (either above or below the one first made) by following the same procedures above.