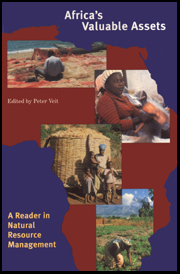 The Loita Forest occupies a special place in Maasai legend and mythology. The Maasai name of the forest, Naimina Enkiyio (Forest of the Lost Child), signifies a conservation morality and consciousness that for generations has guarded it against any form of encroachment that did not respect local communal interests. Legend has it that a young girl was tending her father's calves at the edge of the forest. When some calves strayed into the forest and she followed to retrieve them, she could not find her way back. In the evening the calves arrived home without her, and young warriors were sent out to look for the girl. They called out her name but there was no response, and they, too, went home without her. The forest never gave her back - hence the name, Forest of the Lost Child.

The Loita area - approximately 2,000 square kilometers - is 320 kilometers southwest of Nairobi, in Narok district, Osupuko division. Loita straddles the Kenya-Tanzania border for approximately 100 kilometers stretching north to southwest, and is part of the Ngurman Escarpment ecosystem on the north and southeast. The area is classified into two distinct ecological zones, high and medium potential. The zones are technical terms applied by the Kenya soil survey to classify climatic zones and their potential for food production per unit area and amount of precipitation a given ecological zone receives annually. The high potential zones receive 1,500-2,000 mm of rainfall annually whereas the medium potential is less than 800-1,000 mm of rainfall per year.

The Loita Forest covers about 300 square kilometers of tropical rainforest. It occupies the mountainous, eastern corridor of Loita, bordering the Ngurman Escarpment and Lake Magadi to the southeast. Although there have not been extensive scientific studies of the forest due to its remote location and inaccessibility, it is known to harbor significant biodiversity. It is an important watershed for the drier parts of Loita and a dry season refuge for livestock, the economic mainstay. The forest is also a spiritual ground for performing a number of traditional rites and ceremonies important to the Maasai of both Kenya and Tanzania. Policing its use has been in the culture of the people. The local community has jealously protected Loita Forest from both external and internal interference. For example, largely because of Maasai efforts, the Loita Forest is the only forest that in the late 1970s and 1980s withstood the mass destruction from the settlement and crop farming of migrant populations.

Loita has an estimated 22/000 inhabitants, a majority of them pastoralists. The local economy is livestock based, although recently, for reasons of food security and following the 1992 drought, groups of families and individuals added grain production to supplement the pastoralist diet of milk and meat. Supplementary grains are sold or exchanged for either stock replenishment or for cash, to meet financial obligations that livestock production alone cannot meet. The land is legally Trust Land not yet registered and the Narok County Council is the legal trustee, but in practice it is managed as common property by the Maasai.

In mid-1993, the Narok County Council published a notice in the official Kenya Gazette declaring its intention to turn the sprawling Forest of the Lost Child into a game reserve. This is in addition to the nearby Maasai Mara Game Reserve, an exclusive 1,500 square kilometers of open savannah land used for the development of commercial tourism, which was set apart in 1960 by the Narok County Council and which has since been its sole manager and principal beneficiary. As a result of the loss of this land by local people, rising populations, droughts, and public policies promoting agricultural expansion and migrant settlement, there has been a decline of pastoralism, a spread of crop farming practices especially wheat farms, an increase in human and wildlife conflicts, and an increase in health problems.1

The local government argued that it had three reasons for setting apart the Loita Forest: to increase revenue sources for the County Council, to create employment for local people, and to ease tourism pressure on the congested Maasai Mara Game Reserve. And it pointed out that the council was also looking at other parts of the district, including the Suswa caves near Mount Longonot, for development of tourism.

The community quickly mobilized against these moves to have the forest set apart as a game reserve. First, regarding the increase in revenue sources and figures, the community challenged the local government to improve existing management practices that still did not indicate proper planning and genuineness on the part of the County Council. The community asserted that there was more than enough revenue from existing sources that had not been accounted for, and there was no justifiable reason for seeking more sources. If the existing financial structures could be made transparent and accountable, expansion would be more justifiable.

On employment, there was no guarantee that any jobs created as a result of the venture would go to the local people. In the other parts of the district where tourism is thriving, jobs are not necessarily held by locals. The County Council has no policy position on this nor influence in terms of dictating employment criteria of private sector investment. The local people feel that the new opportunities created by the introduction of the tourism industry cannot make up for losing these lands and resources as well as their known livelihoods.

On the third point, members of the community noted that the decision to regulate visitor numbers and infrastructure within the Maasai Mara Game Reserve was made by the County Council, which thus far had failed to institute measures to protect the Reserve against the congestion. For example, the County Council could choose to limit visitors while at the same time charging higher entrance fees to maintain the same level of revenue. The same problem would repeat itself in Loita if the forest were opened to tourism investment and the authority to manage it were vested exclusively in the County Council. The creation of a protected area would mean that the responsibility to manage the forest would move to the County Council. This amounts to an infringement of rights and an affront to local cultural practices and knowledge systems.

While presenting their case to the County Council, the Loita Maasai pastoralists could not convince the local government to change its position and they could not prove to the Council how their rights should or would supersede those of the local government in control and management of forest. As a last resort, in 1994, the community registered with the government a Conservation Trust, The Loita Naimina Enkiyio Conservation Trust Company, to fulfill two main objectives: to guarantee their rights over access and use of the forest just as in customary law, and to conserve the forest in its pristine state for posterity while using its products sustainably. This action created a national precedent for the state/community relationship with regard to environmental and natural resource management.

In response, the Narok County Council asked the central government to deregister the Loita Trust, claiming that "you cannot have a conservation trust in contradiction of an existing constitutional authority vested in the Council." Although there is no legal argument to support this assertion, the Loita Maasai - fearing that the Narok County Council might actually formally request the deregistration of the Loita Trust and that the central government might actually deregister it - in 1994 filed a suit in the High Court to stop the Council from interfering with the affairs of the conservation trust they had founded.

The judiciary has found it difficult to award for the plaintiffs, namely the communities, because of a legal clause that bars individuals from suing on behalf of the public. This particular clause merits review, as read in the words of Hon. Justice G.S. Pall while delivering a ruling in High Court Civil Case no. 1679 of 1994, Loita Conservation Trust vs. Narok County Council. In delivering his ruling on whether the Loita Maasai can sue the Narok County Council within the time frame provided for since the Council published its development plan, he said, "The law should be amended to allow for applicants with deserving cases such as the Loita, to be heard in the event of a judicial review." The case is now being heard by a Constitutional Court made up of three Justices of Appeal, to determine whether the rest of the land laws are in contradiction to the Kenyan Constitution. But at the time of this writing, nothing had been heard from the Attorney General.