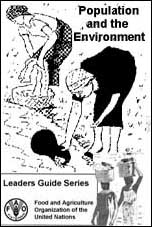 By participating in the activities of this module, it is intended that the group members will:

Activity no. 1 - The hen that laid golden eggs

A story to illustrate the dangers of overuse of the natural resources. 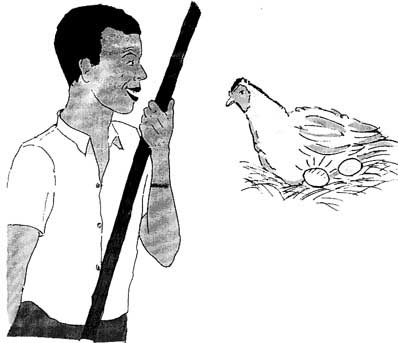 The hen that laid golden eggs

Note: The leader may like to substitute the story of the hen that laid golden eggs with an appropriate local story which also describes misuse and destruction of a valuable asset.

The story of the hen that laid golden eggs

After that, every day, the farmer rushed out to the chicken house to check on his hen and at least once a week, it gave him a beautiful golden egg. With the money they got from the eggs, the farmer and his wife were able to build a bigger house and buy many fine things.

I wonder, said the farmer to himself, if I could get more eggs from my hen? So he began to feed the hen special food and to keep her in a special cage and, just as he had hoped, the hen began to lay two or three golden eggs every week. The farmer was very happy and had even more money to spend.

But as the farmer grew richer, he also became greedy and stingy, and he began to give the hen less special food and take less care of the chicken house.

As a result, the hen that laid the golden eggs became weak and sick and began to lay fewer and fewer eggs. Finally, one day, she stopped laying eggs completely.

With that, the farmer became very angry and, thinking that if he killed the hen, he could have all her treasure at once, he cut her open and found - nothing at all. 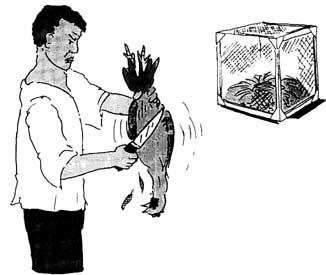 The farmer killed the hen

Activity no. 2 - Phrases that should never be said

Phrases that should never be said

Activity in game form to get participants to identify and contest misleading statements about the environment and population.

Note: The group leader should try to ensure that all members participate as volunteers and in providing clues.

Some "phrases that should never be said"

Everything on this Earth was put here for man to use as he pleases.

It doesn't matter how we use our natural resources. There will always be enough for all of us.

It's the Government's job to protect the environment.

Pollution is only a problem in the towns and cities. The rural areas are still pure.

Scientists will be able to solve all our ecological problems.

The Earth can support any number of people.

It's O.K. to cut down all the trees for fuel. Soon we will be using other kinds of energy and then the trees will be useless.

Activity no. 3 - Caring for our environment: a necessity for now and the future

Caring for our environment: a necessity for now and the future

Activity involving group preparation of posters and/or a drama on environmental and population-related concepts.

Note: Posters could also he sent, via the youth coordinators, to the central population organization, to be redistributed to other youth groups or reproduced at a national level.

Some possible slogans or sayings for environmental or natural resource posters

It's a disgrace to waste water

Let's protect our natural resources, for the sake of tomorrow

Too many people = pressure on natural resources

The land, our hope for a better future

Water - Waste not, want not

Pollution is a dirty joke

Activity no. 4 - Building a solar heater/cooker 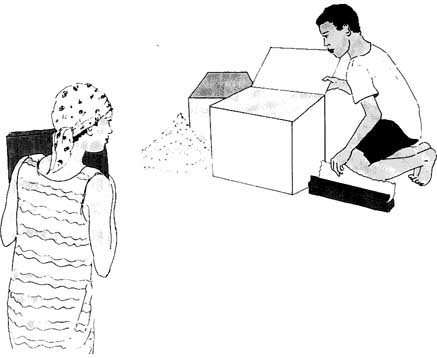 A participatory activity designed to construct a practical solar heater/cooker and at the same time increase group understanding of the difference between renewable and non-renewable resources.

Renewable (that is, they can be managed so that they are constantly replenished) such as forests, water and agricultural land

Non-renewable (that is, when they are used up, they are gone for ever) such as oil, coal and natural gas

Unlimited such as the wind and sun

Solar cooker in a sunny place