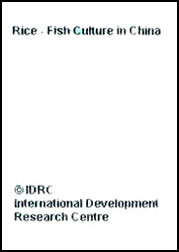 Before the 1980s, aquaculture scientists in China experimented with fish troughs combined with fish trenches, which had been adopted in ricefields in the southern part of Jiangsu Province. However, during the midsummer droughts in Dazu County, the shallow troughs and small trenches did not provide sufficient water for the rice and fish. As well, the fish were not able to adapt to the high temperatures experienced during the drought.

Researchers in Dazu County studied the factors that influenced fish growth, e.g., the relationship between temperature and depth of the different water layers, the upper and the lower limits of temperature that suit fish growth, the relationship between the appropriate temperature range and the environment of the ricefield, the quantities of dissolved oxygen produced and consumed during the day and at night, and the form of oxygen molecules moving in the water. Based on their research, they developed a new approach to solve the conflicts between fish and rice. They dug 1-m deep fish pits that covered about 6-8% of the ricefield and connected the pits to trenches. Field experiments were conducted in many areas between 1980 and 1983. This new model of rice-fish farming was verified and accepted by farmers and the county government.

Development of the Method

At the beginning of the trials in 1981, the area for rice-fish farming with fish pits was 0.2 ha. In 1982, the area reached 1.1 ha. Multiple-plot trials totalled 14 ha in 1983. By October 1984, the area had expanded to 3080 ha, and by the end of 1985, 3570 ha had been developed. Farmers had discovered that the economic benefits from the new model were 3-8 times greater than from flat field rice-fish culture. Fish yields as high as 3195 kg/ha were obtained. From 21 July to 31 August 1985, Dazu County experienced a midsummer drought and 5800 ha of flat-field rice-fish farming (58.8% of the total area devoted to rice-fish farming) were damaged. However, good harvests of both rice and fish were obtained from rice-fish farming with fish pits. This convinced the farmers of the value of using the new model and the technique became popular. By the end of August 1986, the total area of rice-fish culture with fish pits reached 41 474 ha. It is expected that new developments will move toward combining fish pits with shallow ponds.

Although the environment in the fish-pit method is superior to the environment in the flat-field style, production of adult fish was directly influenced by management level (Table 5). Large-scale experiments, demonstrations, and extension were carried out in 1984-1985. Yields decreased as the level of researcher involvement decreased. Yields were highest in experimental areas and lowest in the extension areas.