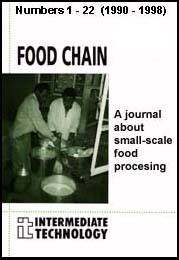 'It is important that the spikes are harvested at the same stage of maturity as this ensures a more uniform final product.'

Michael Battcock spent two years based at the Department of Minor Export Crops Research station in Sri Lanka, his work being largely concerned with the post-harvest problems of small producers. This article is part of a forthcoming IT publication on spice processing for small farmers.

By definition, processing does not include harvesting. However one cannot produce a good product from badly harvested materials.

stage of maturity as this ensures a more uniform final product.

After harvesting the pepper, berries can be fermented by laying them out in the sun. This allows an enzymatic reaction to proceed in which phenolic compounds are oxidized ensuring that the final product has a good black colour. The length of time that pepper is fermented varies from a few hours in Sri Lanka to a few days in Indonesia.

The berries can be detached from the spike by hand, by trampling the spikes underfoot, or beating them with sticks. The larger pieces of the spike stem can then be picked out and smaller pieces removed using a winnowing basket. In some countries, such as Sri Lanka, threshing does not take place until after final drying.

The berries should next be washed in clean, cold water. Berries which float are not suitable for culinary use anti should be dried separately. There is a market for these berries for oil distillation.

Blanching is considered to increase the rate at which berries dry and also speed up the enzymatic reaction that produces the final desired black colour. Blanching is carried out by immersing the berries in hot, but not boiling, water for up to 10 minutes until their colour changes to a dark green. It is important that the pepper is not left in the water for more than 10 minutes as volatile flavour components can be lost and the enzymes responsible for the colour changes may be deactivated.

A simple method of blanching involves placing the berries in a cloth sack attached to a stick. The sack can then be immersed and removed from the hot water with relative ease. Blanching is not essential but is commonly practiced in Indonesia and Sri Lanka.

Drying is perhaps the most important step in the processing of pepper. It is advisable that the pepper is dried as quickly as possible because in the hot, humid climates where it is grown, mould growth can be rapid. Even a trace of mould can reduce the value of the pepper by 50 per cent.

Sun drying is the most common method of drying pepper for the small-scale producer. This involves placing the pepper in thin layers on clean mats. Obviously, the thinner the layer of the pepper on the mat, the faster the drying rate. The mats should be placed in the sun, away from excessive sources of dust and dirt like roads. Unfortunately, this practice is not always followed, and pepper is often laid out near roads and so contaminated during drying. Animals and birds should be kept away from the drying pepper as these are another source of contamination. It is essential that someone is nearby to cover the pepper if there is sudden rain and to rake it over every 3 to 4 hours.

The pepper should be dried to a moisture content (wet basis) of 12 per cent which can take anything from 5 to 12 days in the sun. Determining the point of adequate drying is critical. A method used in Sri Lanka to tell if it is dry enough, is to put ones hand into a heap of pepper, and if the pepper sticks to the hairs of the hand, it is sufficiently dry. Over - drying results in the loss of volatile flavour components and, of course, weight or yield which reduces the return to the farmer.

Artificial driers operating at temperatures below 80°C, which avoids loss of volatile flavour components, can be used, but unfortunately there are not many small; low-cost systems suitable for the small-scale producer. This is an area which deserves attention. Many small do not have an electricity supply, so forced air dryers are impracticable. From my experience working with spice producers in Sri Lanka it would seem that a biomass fired, natural convection drier, possibly with a solar root, is required. The capacity would need to be about 50 kg and the cost of which would need to be kept below £150, with much of the construction done by the user. A high level of self build would be essential. It would be of considerable interest if readers with experience in this area could let us know of their work.

Removing dust and dirt and grading the dried pepper berries can be carried out with winnowing baskets and sieves. Winnowing and grading machines are available for larger throughputs, but are usually not suitable for small-scale production.

Secondary processing by grinding is a means of adding value to the product. However, it is fraught with difficulties. With a whole product, it is easy to assess its quality, whereas with a ground product it is very hard. The consumers' fear of adulteration and the use of low quality produce is often justified. Because of this, there is often consumer resistance to ground pepper which can only be overcome by consistently producing a good product and an established brand image.

Those considering entering the ground spice market will need to carry out market research to find out the degree of fineness (e.g. from 'cracked' to 'fine ground') the consumers want, popular pack size etc. The grinding mills should be set so that they produce the desired ground product.

For small-scale production, manual hand grinders with which an experienced operator can grind 20kg in an 8 hour day are available in most countries. However, this is hard and boring work. A treadle or bicycle wheel could easily be attached which would make the work easier and increase the throughput to 30kg.

A polypropylene container can be sealed by folding the material over a hacksaw blade and drawing it slowly over the flame of a candle. However, this is uncomfortable as the hacksaw blade heats up and burns the hands of the operator, and the seals produced by this method are often imperfect, and appear untidy.

Simple electric heat sealing machines are available and will speed up the process and produce a tidier finish. Eye-catching labels should be sealed in the bag or in a separate compartment above the bag.

'Drying is perhaps the most important step in the processing of pepper. Even a trace of mould can reduce the value of the pepper by 50 per cent.'