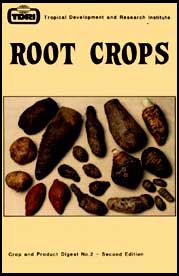 Giant taro is a tall succulent herbaceous plant, reaching 4.5 m in height, with a thick cylindrical stem arising from a basal corm. The leaves are borne on long petioles which arise from the stem and are sheathing on the lower half, but the blades are more or less heart-shaped with rather rounded basal lobes: the blades point upwards forming a straight line with the petiole (unlike Colocasia or Xanthosoma spp. in which the blades point downwards to form an acute or right angle with the leaf stalk). The leaf blades have a conspicuous midrib, raised on the upper surface, and grow up to about I m in length. They are usually green, but there are variegated forms which are blotched or mottled with white. The spathe has a glaucous, yellowish-green blade. Cormels are formed around the basal corm. The plant contains latex.

The giant taro is thought to have originated in Sri Lanka, but has become widely distributed in the South-East Asia subcontinent, Malaysia, Indonesia and Polynesia, and has spread to parts of tropical America.

Temperature - the species is essentially tropical and temperatures below 10°C are detrimental to growth.

Rainfall - taro requires a reasonably high (in excess of 170 cm per year) evenly-distributed rainfall and cannot survive a long period of drought. It is frequently found naturally along river banks, but cannot stand waterlogging.

Soil - the plant grows well in medium to heavy soils provided drainage is adequate. Response to nitrogen fertilising has been demonstrated.

Material - suckers are commonly used, but shoot tips with a few inches of stem and rolled up young leaves, or sections of stem having two or three buds are also frequently employed.

The giant taro is resistant to most pests and diseases, although in India considerable losses have been reported due to an unidentified bacterial leaf spot disease.

The crop life is usually 12-18 months, but harvesting can be delayed for up to four years.

The giant taro is normally dug by hand; the plant can remain in the ground for about 3 months after reaching maturity without any deterioration and is in fact often 'field-stored'.

Stems - unlike most other edible aroids, in which the edible parts are subterranean, it is the fleshy aerial stems of the giant taro that provide the primary product. These stems may be up to I m long and 20 cm in diameter, normally weighing 8-10 kg, though 20 kg or more is not uncommon.

In the Pacific islands harvesting is usually after 18-24 months but the plant may be allowed to grow for up to 4 years, producing corms weighing about 18 kg. Theoretically, yields for pure stands could be almost 200 t/ha at this stage, but no yields for the Pacific region have been reported as all normal planting is intercropped. Much lower yields are reported from Sri Lanka, where harvesting is usually at 11 months, giving about 7-11 t/ha per crop (1.8-2.7 kg per plant) though when grown over coconut husks 6-7 kg per plant is obtained.

The stem tuber is peeled, cut into pieces and eaten as a vegetable after cooking, usually in curries or stews. Older stems may require prolonged cooking with several changes of water to remove acridity.

Giant taros are sometimes used as a source of a very white easily-digested starch or flour. The underground corms and cormels are also used for food after thorough cooking, particularly in times of scarcity. The leaves may be eaten (eg fried with onions, garlic, chili, etc). Alocasias are widely grown in certain areas, eg Florida, as ornamental foliage plants.

The corms and leaf juices (latex) are reported to be used for medicinal purposes in India and the Pacific islands. The plant was formerly cultivated in Brazil, where it was utilised as a pig feed. It has also been investigated as a possible raw material for the production of alcohol.

Composition changes with age, older material having lower moisture content and higher solids. Few figures have been published showing starch content but there may be substantial quantities of other carbohydrates associated with it. The starch grains are small, irregularly-shaped polygons of four or five sides, 1-5 microns in length, with approximately 21 per cent amylose and 79 per cent amylopectin. Several cultivars of A. macrorrhiza are reported to be cyanogenic; the cyanogenic glycoside is not present in the corms or stems, but the young leaves have been found to contain up to 0.018 per cent of hydrogen cyanide.

The giant taro is a minor crop in most Asian countries and production is not likely to expand.

OPUTE, F. I. and OSAGIE, A. U. 1978. Identification and qualitative determination of the lipids of Alocasia macrorrhiza tubers. Journal of the Science of Food and Agriculture, 29, 1002-1006.

VALENZUELA, A. and WESTER, P. J. 1930. Composition of some Philippine fruits, vegetables and forage plants. Philippine Journal of Science, 41, 85-102.