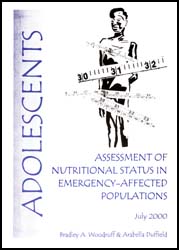 A method has been proposed to account for at least part of the difference in body shape in adults by calculating a BMI which is adjusted for the Cormic Index 75-77. However, this procedure remains untested in adolescents (Nicholas Norgan, personal communication). Theoretically, such an adjustment could also be applied to other anthropometric indices calculated from weight and height, such as weight-for-height or the Rohrer Index. The application of this technique to adolescents may be complicated by the normal changes in Cormic Index throughout adolescence. Moreover, some data indicate that chronic undernutrition changes the Cormic Index 78. Stunted children may have a greater Cormic Index than comparable children without stunting.

An additional method of compensating for ethnic differences would be to choose different, more appropriate cut-off points (either % of median or z-scores) to define undernutrition when using a reference population whose ethnicity differs from that of the survey population. Some populations may be genetically thinner than the reference population, requiring a lower cut-off to define undernutrition. WHO recommends such a procedure when using anthropometry to screen persons for admission to nutritional rehabilitation 12. Nonetheless, the procedure of determining appropriate cut-off points is not simple. Such a process would require either data on health outcomes in order to estimate a functional cut-off or data on a well-nourished population of similar ethnicity in order to derive a statistically-defined cut-off point. Collection of such data for multiple ethnic groups would be expensive and time-consuming.

A single, international reference population consisting of adolescents from multiple countries could be used, similar to that currently under development for children less than 5 years of age. A reference population described in recently published work includes children and adolescents from national surveys done in six countries 80. In this proposal, cut-off points for BMI to define overweight and obesity were identified by determining the centile among 18 year-old adolescents in each national survey population which matched the adult BMI cut-off points of 25 and 30. That centile was then applied separately for males and females to each one-half year age group from 2-17.5 years to determine the cut-off BMI value at for each age and sex group. The cutoff points for each national population were then averaged to produce age- and sex-specific cut-off points for the combined international reference. The same procedure could be used to determine cut-off points which correspond to the adult cut-off points for various degrees of undernutrition, i.e., BMI of 16, 17, and 18.5 kg m-2. This proposed reference and the method of determining cut-off points for BMI eliminates the bias which may result from using as a reference a sample from a relatively obese population, such as American adolescents. However, its use still requires accurate ages because the BMI cut-offs change substantially with age, and it does not correct for differing ages of sexual maturation. In addition, the reference proposed may not be appropriate for populations with different body shape, such as Nilotic Africans and Australian aborigines.