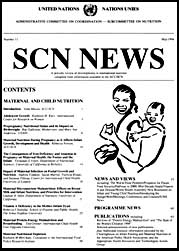 Scientists have long been concerned about the relationship between maternal protein-energy malnutrition1 and breastfeeding. There is general agreement that lactation puts some nutritional stress on women, especially when it overlaps with more than one trimester of the next pregnancy (1). It is common that women lose weight during sustained lactation.

1 Similar to the case for young children, protein-energy malnutrition in adults is difficult to define. Anthropometric indicators are actually all that is usually measured as indicators. Arm circumference is of increasing interest, but most studies have used weight, height or weight/height2 (body mass index).

However, both lactation and maternal malnutrition independently increase the period of lactational amenorrhea and infertility after giving birth. This increases birth spacing and the period when nutritional recuperation can occur (2). For those women who lose more than average amounts of blood at each menstruation (i.e., those who are at greatest risk of developing iron deficiency anemia), lactation amenorrhea has an additional protective effect. The iron secreted in breast milk is far less than these women save by missing even a few menstrual periods (3).

There do appear to be situations in which heavy physical workloads and reproductive burdens lead to a decline in nutritional status with increased parity (4). However, many studies have been unable to find evidence for a “maternal depletion syndrome,” even where women are poorly nourished and where breastfeeding is the norm (5).

What effect does maternal nutritional status in turn have on lactation? Prentice and Prentice (6) point out that, unlike in other mammals, there is no dose response relationship between diet and human lactation. Diet, the mother’s nutritional stores, reductions in physical activity, and metabolic adaptation all combine to provide a buffer (7). Over the years investigators have found increasing evidence that milk production itself is extremely efficient (8). The International Dietary Energy Consultancy Group’s 1993 Annual Report to the ACC/SCN states: “Human lactation appears to be very robust, and BMI does not provide a useful indicator of function at the levels studied so far. Lactation performance must become compromised when undernutrition is sufficiently severe, but it appears that this must be in famine or near famine conditions.”

Few of the studies that have supplemented the diets of poorly nourished women during lactation have found substantial effects on milk production or quality (13). A longer period of supplementation may be required to have much effect.

While there is little scientific evidence of substantial effects of maternal nutritional status on lactation, both health professionals and women commonly believe the effect is large. The most common answer received in response to simplistic questions to women about why they start to bottle feed or stop breastfeeding is “insufficient milk”. This appears to be a shared belief in many cultures. Women believe iris a common problem and respond to infant hunger cries or changes in their breasts by supplementing the baby’s diet with other foods - and as a consequence the baby’s appetite and sucking at the breast decrease. This reduces breast milk output and the belief becomes a self-fulfilling prophesy that convinces health workers that a real problem exists (14). Careful studies in Sweden were able to find no evidence that breast milk declined in quantity at times when breastfeeding women were convinced that it did (15). Where the “insufficient milk syndrome” is widely believed in, poor maternal nutritional status is often assumed to be the major cause.

In Yemen, health professionals commonly believed that maternal malnutrition was the major cause for the rapid rise of bottle feeding that took place there in the 1970s. When it was pointed out to them that a rapid increase in income had also occurred, and that women’s diets probably had improved as a result, they often speculated that the reduction in consumption of the traditional staple grain, sorghum, must be the cause of the widely perceived problem of insufficient milk (16).

Concern that poor maternal nutrition affects the infant has led to widespread agreement on a policy of “Feed the nursing mother, thereby the baby” (17). While the relationship may not be as direct as this policy implies, there are several arguments for giving priority to women, including lactating women, in supplemental feeding programs. First, these women deserve designation as a target group for the sake of their own nutritional status. Second, most lactating women will later become pregnant again, and improving their nutritional status may reduce the level of low birth weight. The lactating group may be important to reach in cultures where women avoid eating more during pregnancy out of fear of birth complications caused by large babies.

Kennedy and Knudsen have calculated that pre-natal feeding is nearly three times as cost-effective as pre-school feeding if neither is targeted and nearly twice as cost effective if both are targeted (18). There has been concern that the period of infertility after giving birth would shorten if supplemental feeding is provided to malnourished women, but recent research suggests that this risk is minor (19).

Health professionals often worry not only about quantity but quality of their patients’ breast milk2. They sometimes routinely recommend supplements from early months, including infant formula from a bottle. This is based on an assumption that “supplementation” has a nutritionally additive effect, whereas Dewey et al recently showed that it has no beneficial effect on growth even under ideal circumstances before six months of age (20).

2 Growth standards derived from largely bottle-fed infants are not appropriate for use in monitoring the growth of exclusively or predominantly breast-fed infants. These infants appear to grow more rapidly in the first 2-3 months of age and more slowly thereafter. There is no evidence that this period of slower growth is associated with increased morbidity, even when final achieved size is smaller. Mortality rates tend to be lower for breast fed infants. Yet simplistic messages are promulgated in some of the growth monitoring literature warning that vigorous action must be taken from the earliest signs of “faltering growth.”

Simplistic interpretations of data on the economic aspects of infant feeding have also led some scientists to speculate that artificial feeding might be preferable even in poor settings (21). It is hardly surprising that many breastfeeding women do not dare to rely on their own milk.

In St. Vincent, West Indies in 1975, I experienced an interesting example of the potential impact of this confusion. Together with health workers in two towns, I interviewed mothers of 200 children 1-2 years of age, nearly a complete sample for those towns. The bottle was given to 99% of these children from a median age of 2 weeks, but breastfeeding continued concurrently until a median age of 7 months. When I asked these women what would happen if an infant received only breast milk for four or five months, 69% replied that it would be good for the infant and only 10% said categorically it would be unhealthy for the child (22). The others said it would be good if the mother’s diet was adequate. When I asked why they did not feed their own child this way, the most common response was, “I could not afford it.” A possible explanation for this belief was the milk company brochures handed out at the local health clinics (and which were almost the only literature the staff themselves had access to on infant feeding). These stated that lactating women must consume 3000 calories to make enough milk and showed pictures of meat, fish and milk as examples of the diets lactating women should consume. One woman said, “They tell me I have to drink milk to make milk - I might as well give it directly to the baby!” Another said, “I couldn’t afford to buy enough food, so I used Lactogen (an infant formula) to keep her” (23).

Maternal health is receiving much more of the attention it deserves lately and nutrition is an important component. At least in their contacts with mothers, however, health workers should ensure that they do not exaggerate the importance of diet during lactation. It is unlikely a woman will abort her baby if she believes her diet is poor. But a young woman having her first baby may lack confidence in the ability of her own body to produce adequate, good quality milk for her baby, no matter how much breastfeeding has been promoted to her in abstract terms. It is likely that many women are misled regarding the nutritional and economic issues involved and combine breast and bottle feeding, thinking it will give them “the best of both worlds.” Some of the resulting harm to maternal and child health could be considered iatrogenic in origin.