Once farmers decide what kind of draft animal will be used, they must be able to choose individual animals which are sound and trainable and have a considerable work expectancy and resale value. Selecting a good draft animal is a matter of evaluating both physical and behavioral attributes. Age, sex, conformation (shape), and temperament are helpful criteria for judging a draft animal's value. The farmer's total animal needs must be noted when judging an individual animal. If it is to be used as a pair, it should be roughly the same age and size as its work mate, and should be the same sex.

Ideally, farmers should raise their own draft cattle or purchase them when they are very young. This allows the farmers to provide proper nutrition during the critical growth stage as well as to observe and shape the animal's behavior long before it is put to work.

Oxen are normally put to work between the ages of three and four years. They may be trained at two to three years of age and given light work for a season. However, before the age of three, oxen have little power, and hard work can stunt their growth or cause abnormal development of bone and muscle. After the age of four, animals may be difficult to handle and train; they must be broken of old habits before their power can be used.

Although oxen can work until they are 12 or older, many farmers prefer to sell them as soon as their work capacity tapers off. A common practice is to work oxen hard until age seven or eight, use them as a reserve or alternate animal (or pair) for a season or two, and then sell them for butchering.

When buying an ox, the purchaser can determine the animal's age by counting its teeth. Because the approach of an unfamiliar person may cause the animal to shy or to struggle, it is best to have the owner open the animal's mouth. Otherwise restrain the animal and pry open the mouth by pulling up on the nostrils and down on the lower jaw.

Cattle have front teeth only in the lower jaw. Temporary teeth appear at one month. The first permanent teeth appear at age two. By age five, the animal has a full set of permanent teeth. The age of older animals can be determined by observing the wear patterns of the teeth and matching them to the patterns shown in the illustration on the next page. An alternate method is to count the number of rings on the animal's horns; each ring corresponds to one year of growth, the first ring appearing at age two.

Age of Equine Animals Recommended ages for training and working equine animals are very similar to those outlined for cattle. However, in practice, these animals are worked until they are older because their meat is less valuable. The age of a horse, donkey or mule can be determined by comparing the animal's mouth to the diagrams on the following page. As the animal grows older, the enamed wears off the tooth, giving it a smooth, white grinding surface (the dark center disappears). The teeth grow longer and begin to slant; the entire mouth elongates. Compare the side views of the four-and thirtyyear-old horse and note the increased pointing of the jaw. The correct method for opening the animal's mouth is as follows:

• Place the palm of one hand under the animal's jaw;

• Insert the thumb and middle finger into the animal's mouth on either side of the lower jaw, at a point behind the teeth; 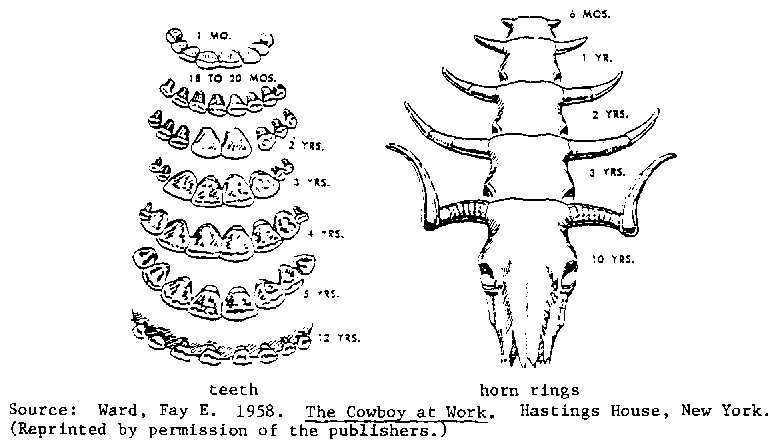 Determining the Age of Cattle 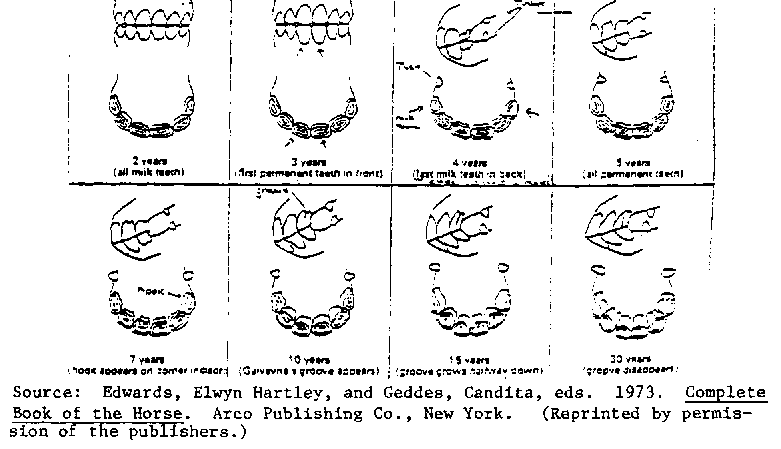 Determining the Age of Equine Animals


• Rub or press the gums with these fingers; this will cause the animal to open its mouth; • Grasp the tongue with the other hand, pull the tongue out, and hold it to one side so that teeth can be seen.

Sex has a bearing on the power and temperament of draft animals. As a rule males tend to be bigger, more powerful, and more difficult to train than females. Females have less endurance and, of course, cannot be used when they are carrying or nursing young. Studies of African cattle have shown that within the same breed and age bracket, males tend to be 50-100 kg heaver than females and can work twice as long during a given day

Such evidence makes it clear that there is an advantage to using male animals. However, the males of some breeds of cattle and buffalo have proven particularly difficult to train. In these circumstances, the animals are castrated at the age of one and a half years in order to make them more docile. There is disagreement about the value of castration, however. Some farmers feel that this makes the animals lazy or interferes with their physical development. Tests have substantiated that castrating eight-month-old calves retards their growth. Other tests, comparing two-year-old cas-bated and entire male buffaloes, showed that the animals performed equally well. Castration also limits a small farmer's ability to raise his own stock, especially if he owns only a few animals. 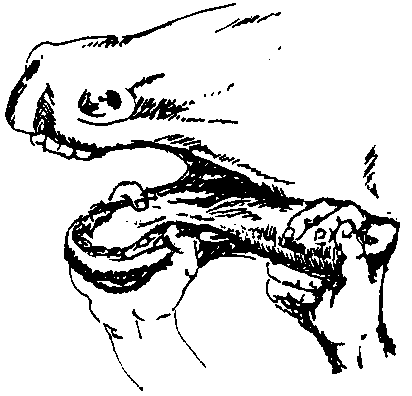 Castrated horses or donkeys (geldings) are preferred over stallions because they are eventempered and manageable in the presence of females. Female horses, mules and donkeys are nearly as powerful as males and geldings, but are known for their stubbornness and unpredictable moods.