Efforts to tackle India's energy problems have not borne fruit in rural areas because they have been inappropriate to the needs of the target group, there have been infrastructural deficiencies and in addition, a slow pace of dissemination. The energy problem remains acute, however, and demands multidimensional intervention from different fronts. One of the most viable propositions is the manufacture of fuel cakes made from cellulosic waste and cowdung. Their effectiveness was tested with some farmers' families in the villages around Gandhigram.

The fuel cake is made of combustible rubbish found around the home such as sweepings, litter and waste paper, using cowdung as the binding material. The waste material is mixed with cowdung in the ratio of I :3 by weight, and is then kneaded well. A 3cm-diameter cylindrical rod is held upright in the centre of the mould (a metal stove) while the mixture is poured in and packed tightly round it so as to 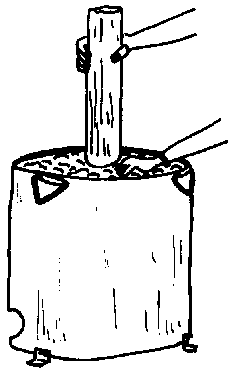 Moulding the fuel cake (above) and lighting the cake (below)