In Senegal, domestic lighting for most villagers is provided by kerosene lamps, dry-cell battery powered torches, and candles. Dry cell batteries are the most common power source for radios. Only 150 villages out of a total of 13000 have access to the national electricity grid, and of these villages only a few houses (typically between 5 and 15%) have grid connections. There is little hope of the grid network reaching more people in future years, because the cost of extensions is so high. There is, therefore, a lively interest in alternative sources of electricity.

Practical research into these alternatives has been undertaken by the Senegalese Government and GTZ. From 1989 to 1993, the project set out to compare four approaches to rural electricity supply:

Each approach provides a different quality and quantity of electricity to the consumer. The national grid connection allows the use of 240V light bulbs, and standard appliances, for example televisions, found in urban homes.

The central village diesel generator and the village solar power station are designed to give each household sufficient electricity for several standard light bulbs and TV and radio connections. The research team built two central solar-power stations, each of which supplies 240V A.C. to 200 families. These stations are rated at 20 peak kilowatts (kWp); ie., the panels produce 20kW when the sun is shining on them at peak strength.

Each solar home system (SHS) provides enough electricity for four, 10-watt, fluorescent lamps at 12V D.C., for about three or four hours each night in each house (about half as much as the central solar plants can provide). All electrical appliances used (for instance radios, small TVs or fluorescent lamps) must be designed for 12V D.C. power. A consumer wanting more power than this can purchase two SHS units, so receiving twice the power at twice the cost.

The research team considers the SHS system to be the most suitable alternative for Senegalese village households. Despite smaller kWhr capacity, it provides better light than the traditional kerosene lamp or candles, together with increased comfort, convenience and safety. 95% of the population are unlikely to require more than this amount of electricity, and the 5% who do require more can purchase a double system.

Unlike the traditional sources of energy, the SHS system still poses problems. The traditional energy sources do not require large capital investments: small quantities of kerosene, dry cells, or candles can be bought as and when the family has the necessary cash available. Most villages (around 80% of the rural population) spend between US$30 and $120 each year on equipment and fuel for lighting and radios, whereas the SHS system requires a down-payment or capital investment of $737. The wet batteries, which are charged by the photo-voltaic panels, cost around $60 duty free and need replacing every three years. A further $10-15 a year is required to maintain the system. If the capital investment is converted into an annual cost, the overall annual costs amount to $130 (duty free) or $200 (duty paid). Only the wealthiest 20% of the rural Senegalese population now spend this much on batteries, kerosene, or bottled gas, and could afford the SHS sys tem. The improvements in comfort offered by the SHS system, however, suggest that as much as 50% of the rural population would be prepared to spend more on lighting and communications - assuming tax-free availability, as recommended in the report. 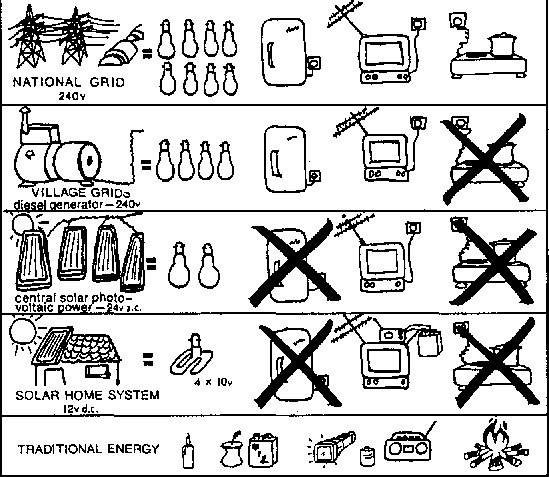 Although 20 to 50% of the population is likely to find reduced-price SHS systems attractive, there are major reservations about actual market demand. If the widespread diffusion of the SHS system is undertaken by private enterprises, which introduce retailer's markups, each system will cost about $1000 or more to buy. A market study showed that only 5% of the population would pay cash if the system sold for about $670. A credit scheme would be essential, but even then only 15 to 20% of the population could afford the systems.

Nevertheless, the decentralized photovoltaic system is recommended as the best option for rural electrification, and the report recommends government support for the following:

• Exemption from taxes and duties;

• Training of local technicians and promotion of local organizations for installation and maintenance;

Electricity supplied by the national grid is estimated to cost $4.20 for each kWhr consumed, while the central solar station would deliver electricity at $3.50 per kWhr, and the diesel generator at $2.40/kWhr, whereas the SHS systems could deliver at $2.50/kWhr. This costing study was carried out for the village of Diaoulé where the 200 houses connected are positioned relatively close together. In most other villages the houses are more scattered, which would raise the cost of electricity distribution and so make a central diesel generator more expensive and SHS systems more attractive.