This paper explores the potential in Mauritius for using low-grade ethanol (ethyl alcohol) produced from locally available molasses as a substitute for kerosene used for cooking. Mauritius is an island in the Indian Ocean with a population of slightly over one million. It has limited hydro-power sites, and no proven fossil-fuel energy reserves, and so depends heavily on imported fuel oil, diesel, kerosene, petrol, LPG and coal to meet its energy requirements. In 1990, imported energy represented 65% of the island's total energy consumption. The remaining 35% was obtained from hydropower (6%), excess electricity from bagasse from the sugar industry (10%) and woody biomass ( 19%). Energy imports accounted for 10 to 15% of total export earnings. Cooking energy represented about 24% of total primary energy consumption in 1990, and 72% of low-income households depend on kerosene for cooking. Of the 175 000 tonnes of 85° Brix molasses produced every year, 145 000 tonnes are exported to Europe and the USA, and could be converted into fuel. Its estimated cost would be US$.17 per litre.

Ethanol is often used for camping stoves and food warming, but it has not been developed for domestic cooking because of the wide availability and low cost of fuels such as kerosene, LPG, natural gas and woody biomass. Ethanol stoves are not usually designed for basic domestic cooking. Various commercially available alcohol stoves were tested and in those retained for further tests, the alcohol was first absorbed in suitable materials and then released for burning as required (see the illustration below, reproduced from Boiling Point 12, which shows a non-pressure, methylated spirit stove). This stove costs approximately Rs450, as compared to kerosene stoves at Rs200 (wick type) and Rs500 (pressure type), but for commercial production prices should be similar to those of the kerosene stoves.

In the table opposite, which details how stove performances compare, it can be seen that ethanol flame temperatures are comparable to those of LPG and kerosene stoves, and that the stove efficiency is higher. The power output is lower, and so cooking takes longer. Power output would be higher with higher grade ethanol, but this would not be economic. It can be concluded that 1.7 litres of 85° brix ethanol is equivalent to 1 litre of kerosene in the types of stoves tested. Their calorific values are: ethanol (85°brix) = 6.7 MJ/litre; kerosene = 38.8 MJ/litre. 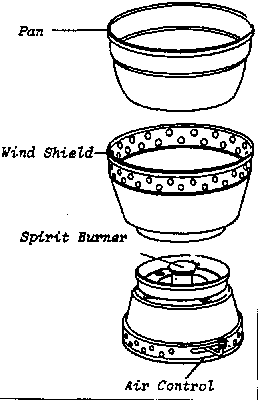 Performance of stoves used in Mauritius

The current national import bill for 21 million litres of kerosene is US$3.8 million per year. The ethanol equivalent would be 35 million litres produced from 125 000 tonnes of molasses with an export value of US$3.6 million, showing a fuel-cost saving of US$0.2 million. The initial capital investment is estimated at approximately US$5.5 million, and the total annual production cost at US$3 million.

This would give an ethanol price of US$0.17 per litre which is about 6-7% more expensive to the consumer than kerosene. It is suggested that ethanol production should be subsidized and the price of molasses kept down to remove this difference. As well as having a locally renewable source (molasses), ethanol is cleaner than kerosene and is less susceptible to violent price changes.

Further investigation would be necessary to improve the design of ethanol stoves so as to make them more efficient, safer and cheaper. A pressurized fuel stove is suggested. The stove would need to be attractive as well as meeting all the requirements of the users.

1. The author's details of the ethanol production process and costs are not reproduced here.

2. Brix' ratings indicate the sugar concentrate percentages as measured by a Brix hydrometer