Biomass fuels such as wood, agricultural wastes and animal dung provide about 95% of the total energy consumed in Nepal, most of which is used by the domestic sector for cooking, space heating and agro-processing. Nepal's average annual consumption of fuelwood is 600kg per person. Nepal's forests have been consumed at a rate far exceeding their regeneration. Between 1964 and 1985 the area of natural forest was reduced by about 570 000 hectares or 22 800 per year. Improved stoves are recognized by various rural development organizations as significant in conserving fuelwood and biomass resources. In most rural areas, the shift from forest and agro-based energy to other forms cannot be achieved easily because of prohibitive costs.

Large-scale dissemination of improved stoves was attempted in 1981 by the FAO/Community Forestry Development Project with assistance from RECAST. Various other national and international organizations started to disseminate ceramic stoves but without properly assessing the needs and social habits of the ethnic groups and geographic regions concerned.

The numbers of stoves disseminated remain low largely because of their poor durability during transport and use, and so later programmes focused on mud stoves made on site (in some cases with iron tripods), designed and tested by RECAST.

Other designs promoted included insert stoves, double-wall stoves, single- and double-pot mud stoves, metal stoves and stoves with metal tops. Most of these programmes were launched as entry points to help other programmes for rural development and were not given qualified staff to look after them. In the past few years the Tamang stove (mud stove with an iron tripod) and a mud/brick stove, constructed on site, were promoted. RECAST introduced metal moulds for the stoves and wooden moulds for square chimney sections. These stoves are difficult to commercialize and their construction needs regular monitoring and support.

Unsuitable chimney design or construction, resulting from poor training, causes low draught to the second pot or back draught and in winter, some households switch to the open fire for cooking and space heating. In the villages in the hills and mountains where good clay is not available and steel stoves are expensive, the policy was to use local materials to make stoves such as the Tamang which showed efficiencies of 20 to 25% in the field as compared to 10 to 15% for traditional stoves. The majority of the women were satisfied with the Tamang for cooking comfort, reduced cooking time, less smoke, and less fuel consumption. RECAST found that in the Kavre district, about 28% of the women obtained their fuelwood from their own land and did not experience a shortage. Other factors led them to adopt the improved Tamang.

In Southern Nepal, (Terse), where kitchens are wider and better ventilated, single- and double-pot stoves without chimneys but with metal grates were introduced. They will burn agricultural residues and dung, and show 42 to 44% fuel saving compared with traditional stoves. Fuel consumption with residues was found to be less than with a wood, dung and residue mix. 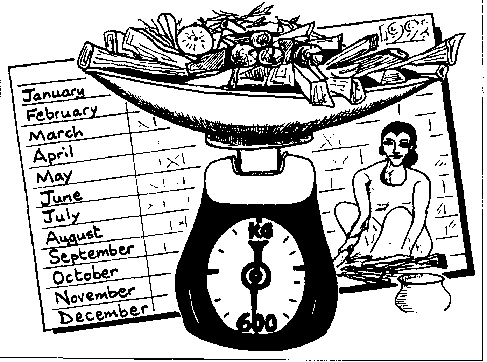 Nepal's average annual consumption of fuelwood is 600kg per person.

Ceramic stoves have been promoted in Nepal for many years because of the good pottery skills and the availability of clay. A major reason for their lack of success has been poor durability and so clay studies were recently carried out. Most Nepali clays contain more clay minerals than non-clay materials, and so are subject to high shrinkage in firing which results in cracking. This is reduced by adjusting the clay/non-clay ratio to 1:1. Improvements can also be made by different production methods and by improved designs, eg cuts to relieve internal stresses. Ceramic stove use is now expected to increase, particularly in urban areas.

Kitchen conditions are not considered to be a priority, particularly in rural Nepal, although they influence the comfort of the entire dwelling. However, improvements introduced by stove and household energy programmes were welcomed by the women. They liked more room, cleaner kitchens, fewer smells and flies, and better storage places.

Women's participation in ICS installation is limited by cultural, social and economic constraints. Women's lack of confidence in their ability to cut stones and install chimneys may limit their mobility and activities. The heavy workload of young women, especially daughters-in-law, leaves them little time to participate in the training and stove construction activities. Typically, they have to work 12 to 14 hours per day.

Recently an extension programme was carried out in Malpi Village to test a new approach through more active involvement of women stove users. In view of the traditional building skills of housewives and the need to improve their stove technology, courses were held for the construction of the improved Tamang stove. The courses also included training in kitchen gardening, composting, wooden rack making, food net, bucket, bowl and waste container making, and the improvement of kitchen lighting and ventilation. 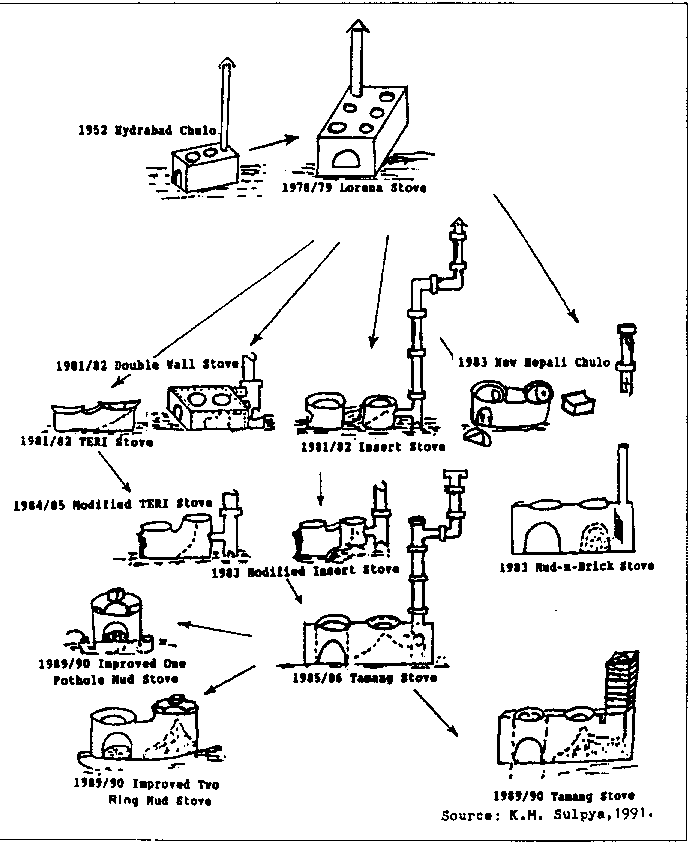 The evolution of improved cookstove design in Nepal.

Dissemination of ICS is carried out by the organization itself. Before launching the programme, the interest and need of the local people is assessed by house-to-house visits or informal surveys. In some cases, the dissemination is concentrated on the women's group which is involved in production credit for rural women's projects. Depending upon the programme carried out by the projects, the dissemination of the ICS is either free or subsidized. In the hills and mountain areas, large parts of the cost goes to the stove installer.