The Gandhiniketan Ashram is a Gandhian Constructive Work Institution started by Sri. G. Venkatachalapathy at Kallupatti near Madurai in 1940. Its main aim is to spread the living message of Gandhiji. Since the 1950s, it has been seriously engaged in chulha promotion among the villagers to help provide a Sappy and environmentally friendly lifestyle.

In 1934, tie All India Village Industries Association was inaugurated by to All India Congress Committee Dr J.C. Kumarappa began to experiment with improved models of Indian stoves, including the Magan Chulha in order to improve the living conditions of the village women.

The Magan Chulha was originally a massive, three-pot, Lorena-type mud stove needing at least a month's preparation before it could be used. The Ashram developed the Kallupatti model, a smaller, two-pot, partially baked version which could be transported for installation in a kitchen. This was popular because it would burn dried leaves and twigs, reduce smoke, last for a generation and save up to 30% on fuel costs. Fifty thousand have been supplied in Tamil Nadu, including 'community' versions. Gandhiniketan has been a training as well as a production centre since 1940. It standardized chulha dimensions and trained potters to conform to the correct designs. The design was modified to provide a 45° slope on the tunnel from the fire chamber to the second pot hole, which helped it to burn alternative fuels. Improvements were made as a result of suggestions from the women users. Potters were trained to make mud pipes and chimneys and to install them in the houses and through thatched roofs. They were provided with potter's wheels to produce stove components and pots.

For three years or more, the Government of India has been subsidizing the cost of smoke-free chulhas in the rural areas through its Non-Conventional Energy Programme (NCEP). The Gandhiniketan has installed its quota of 7000 stoves per year in addition to training 40 traditional artisans (with the help of ITDG). It has appointed supervisors to promote the stoves and monitor their performance, and trained masons to install and correct stoves and chimneys. The original Kallupatti stove was improved and re-named by the Government as Sukad (See Figure 2). The steel hearth plate was removed, the level of the second pot-hole was raised and a door for cleaning was provided at the bottom of the chimney. Further improvements are being studied.

A decade ago, an ITDG report helped the Ashram to obtain the support of the NCEP for the Kallupatti stove and a Boiling Point article (Number 3, October 1982) gave it international publicity. ITDG helped fund a survey of potters' conditions and find solutions to some of their problems. It also enabled the Ashram to have a pucca building for its pottery section in which it hopes to host international meetings.

Plans for the future

Protecting the environment, saving the forests and improving cooking conditions for women are basic concerns. Central Government has supported the programme with subsidies which mean that the householder now has to pay Rs10/-towards the cost of a stove plus installation charges, and to provide the construction materials. What will happen to the artisans if the subsidy ends? A strong promotions campaign has been started, using the 1 25th anniversary of the birth of Mahatma Gandhi. It is now up to the educated, rural masses to understand, appreciate and adopt the chulah programme with determination.

Since writing this article we have received a copy of the October 1993 issue of Changing Villages containing an article entitled 'Performance Evaluation of "Sukhad" Model Chulha in Ranga Reddy District of Andhra Pradesh' by Vasantha N. and Mridula Reddy D. For details contact CORT, D-320 Laxmi Nagar, Delhi-1 10092, India. 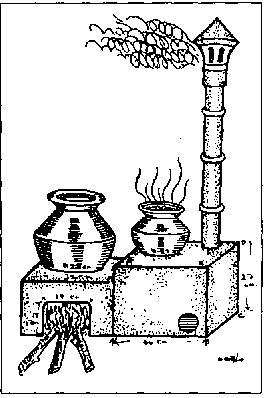 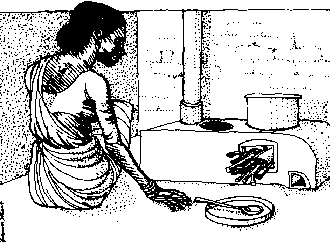