Back to Basics in the Kitchen

Getting better practices into use

Significant savings in fuel and time can be achieved by the introduction of a few simple practices into cooking procedures. For users of open fires, the effect can rival that of purchasing an 'improved' stove; and for those with stoves it presents an opportunity to maximize efficiencies. These methods can also improve kitchen hygiene and safety, making them desirable even in areas of fuelwood surplus.

The Bellerive Foundation, a Nairobi-based environmental NGO, has spent the last eight years exploring ways to tackle the problems of fuelwood shortage and poor cooking practices in East Africa. Concentrating particularly on the development of large wood-burning stoves and the improvement of kitchen management, the Foundation's catering package is now the dominant system installed in institutions in Kenya.

Significant progress in fuel-saving has also come about in the domestic sector. A number of simple techniques have been identified which can result in fuel-savings when using an open fire or domestic stove.

For an open-fire user, the adoption of simple practices such as the adequate drying of firewood, pre-soaking of certain foods and the use of lids on pots can result in savings equivalent to, or greater than, those achievable through the use of improved stoves. There is no stove cost, and the advantages of light, heat and adaptability in cooking with the open fire are not lost. Similar techniques are also suitable for stove users.

A number of fuel economy measures were tested under controlled conditions. The aim was to determine the percentage savings in both firewood and time achieved with an open fire, and with an improved woodstove.

open fires, with pots supported on three stones. The second group of tests was conducted using a kunimbili improved domestic woodstove. In this case, a household situation was simulated by building a kitchen and placing the stove in an appropriate position. As the open-fire tests were conducted in an unprotected environment, it is not appropriate to make direct comparisons of fuel-efficiency or cooking time, nor was this the intent! In both experiments, meals were prepared for an imaginary family of eight people, using typical Kenyan dishes and utensils.

Ten conservation techniques were tested with the open fire and nine with the woodstove, but all would be applicable to either situation. Most require only minor adjustments to existing practices - such as using lids on pots, and presoaking or chopping up certain foods before cooking. Others, such as grinding maize into small particles before cooking, would demand more significant adjustments in eating habits in some areas. The tenderizers used in the stove tests were soda ash for maize, and beans and pawpaw juice for meat.

The results of the open fire tests are shown in Table 1 (see over). The greatest fuel savings were achieved when firewood was rearranged to sustain the simmering of potatoes, rather than adding more. Although this process took 11% more time, it reduced the amount of fuel needed by 57%. Other practices, which resulted in firewood savings of between 20 and 40%, were: pre-soaking maize and beans to soften them before cooking; chopping up potatoes for boiling rather than leaving them whole; boiling potatoes in an aluminium pot instead of a clay one; using dry firewood rather than recently cut pieces; using cut and split firewood; and using lids on pots. Firewood savings of 18% were achieved by putting a stone on top of the lid to reduce the release of steam. Again, using a clay pot rather than one made of aluminium for maize and beans (a slow-cooking meal) reduced fuel consumption by 5%.

Table 2 (see over) shows the results for the woodstove tests. The greatest fuel savings were achieved when maize was ground up before cooking - saving over 60% in both firewood and time. Fuel savings of at least 30% were also achieved by: re-arranging burning wood sticks to allow simmering; using properly dried firewood; adding a tenderizer when boiling meat; using a

lid on the pot when cooking gruel; chopping up potatoes; and placing a stone on top of the lid when boiling water. Time savings of 5 to 15% were achieved by using a tenderizer when cooking maize and beans and using an aluminium pot for fast-cooking food.

The savings are likely to be less substantial in the true domestic setting but, nevertheless, still significant. 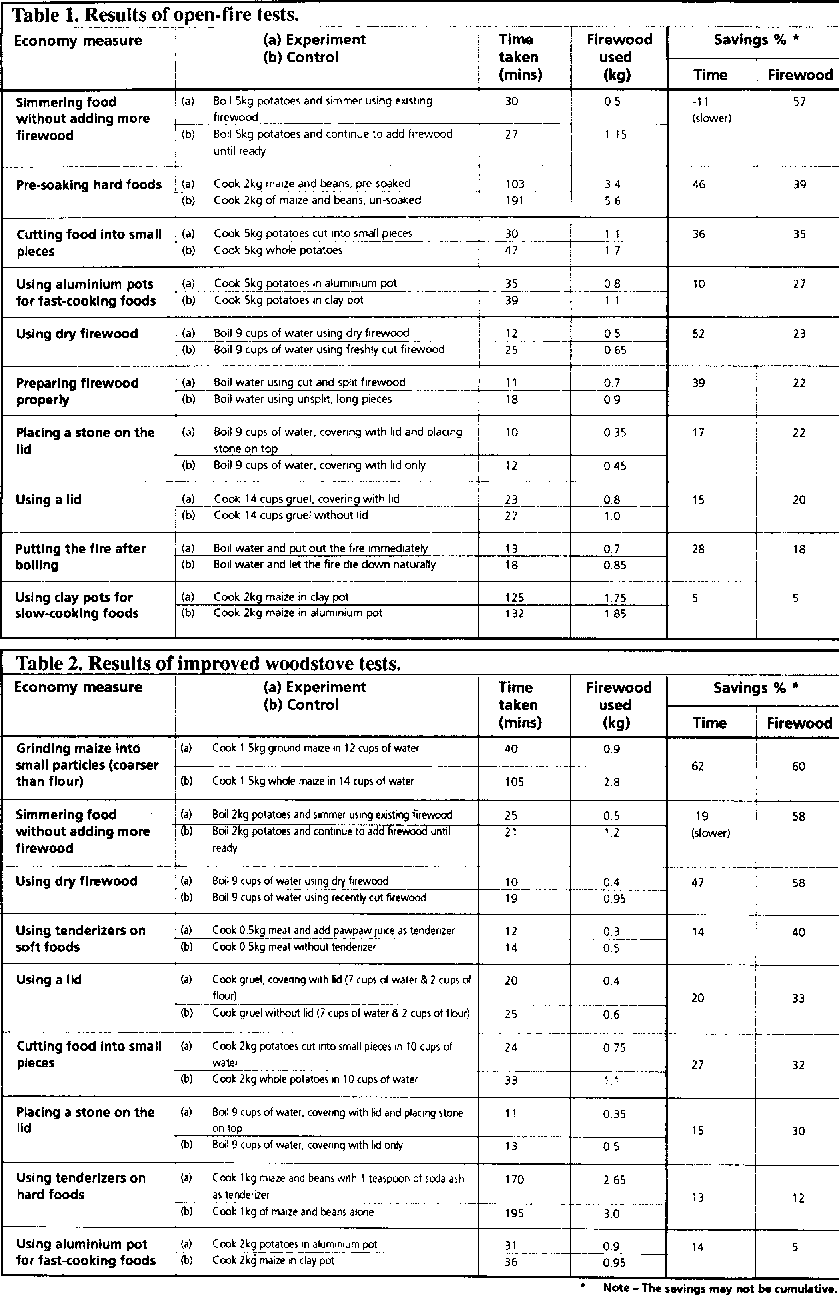 These tests demonstrate that adopting inexpensive and simple practices when cooking on an open fire can result in significant savings in fuel and time. They also show that if an improved stove is used, its performance can be upgraded substantially by employing similar measures. To own an improved stove and not employ such simple techniques is to waste its full fuel-saving potential.

The more conservation practices employed at the same time, the higher would be the anticipated savings, although these savings would not be cumulative.

Significant numbers of people in rural areas have no access to improved stoves, or lack the interest or funds to buy them. Even those who have purchased them often continue to use an open fire alongside. Simple conservation practices could play an important role in reducing demand for household energy if suitably promoted. The practices can also improve kitchen hygiene and safety, making them desirable even in areas of fuelwood surplus.

The Bellerive Foundation has been introducing conservation techniques in Kenya for several years through the primary school curriculum. The range of ideas has been translated into a package of lessons called 'Cooking to Conserve', designed for the upper primary, home science curriculum. The aim is to show children ways to manage the traditional open fire more efficiently. It is hoped that the ideas will be taken home to parents and families, and it will only be a matter of three or four years before many of the pupils themselves are parents and heads of their own households where they will have a chance to put the techniques into practice.

Through workshops for teachers, the package has been introduced to over 2500 schools so far. Tutors at Teachers' Advisory Centres are now also trained in 'Cooking to Conserve', so that when teachers go for retraining or curricula updates they learn automatically about the ideas and lesson materials.

The Ministry of Education is also about to introduce a streamlined version of the package into the Kenyan national curriculum, which means that domestic energy-conservation techniques will be introduced routinely as part of lessons, examination structures and normal teacher-training and retraining.

Editor's Note: Several methods are proposed by Bellerive for more efficient use of the three-stone fire, none of them new or difficult to follow; so why are they not all used more widely and simultaneously already? The answers must come from the social scientist rather than the stove technologist. ITDG's experience is that cultural habits are more difficult to change than technologies.

Clearly, if these methods have not been adopted by the enterprising women cooks in Kenya and elsewhere, they must have good reasons reflecting higher priorities than fuel efficiency. for example a potential fuel saving of 57% by simmering rather than boiling is surely too obvious an economy to be overlooked.

Matthew Owen replies: 'The economy practices we try to encourage with the three-stone fire, were not devised by us or any other organization for introduction to target communities. They are, in fact, practices which we have observed women themselves employing in areas hit hard by fuelwood shortage. During a recent study on Rusinga Island in Lake Victoria, for example, our field staff saw the whole range of techniques in use as a result of the pressures of extreme firewood shortage'. The following article illustrates this.