In 1975, in the wake of the oil-price shock, another-less publicized-energy crisis was 'unveiled'. In much of the developing world, experts had discovered what millions of villagers already knew: fuelwood, the most widely used Third World fuel, was getting harder to find. People were gathering wood for their fires more quickly than it could grow back. In Sudan, wood was being burned 70 per cent faster than replacement trees were growing. In Ethiopia, it was going up in smoke 150 per cent faster. Among environmentalists, the perception became widespread that village cooking fires were consuming the globe's forests.

After further study, analysts realised the initial alarm had been mistaken - and that firewood demand was a minor cause of deforestation. People were mostly using twigs and dead branches for fuel, leaving trees standing. The perpetrators of deforestation were not women preparing for the evening meal, but farmers clearing land for crops and livestock. To this day, however, the belief persists that fuelwood scarcity drives deforestation. That popular misconception has hampered efforts to address serious fuelwood problems that do exist. While not quite deforesting the globe, these problems are undermining the well-being of hundreds of millions of people on at least two continents.

Biomass - the people's fuel Biomass, including wood, other plant matter, and animal wastes, provides 14 per cent of the world's primary energy. It is the principal fuel of at least two billion people, a majority of them in sub-Saharan Africa and the Indian sub-continent. In countries such as Ethiopia and Nepal, biomass provides 90 per cent of the total energy consumed. An estimated 80 per cent of the biomass energy is used in homes for cooking and heating. Until recently, most biomass consumers lived in rural areas. As populations have grown, and the number of trees has diminished, searching for fuelwood has indeed become a demanding task. In some areas of Nepal, for example, collecting firewood was a two-hour task only a generation ago, yet today it is almost an entire day's expedition. That constitutes an enormous erosion of productivity in other kinds of work. And the problem is worsening rapidly; a study by the UN Food and Agriculture Organization (FAO) forecasts that while 1.3 billion people were short of firewood in 1980, the number will rise to 2.7 billion by the turn of the century. Although the FAO study has a few shortcomings, its conclusions are widely accepted.

Paying the price for 'progress'

What makes the situation even more difficult is that fuelwood problems have now spread from rural areas to the cities. In the 1950s, the cities in developing countries were relatively small, inhabited mainly by those who could afford such 'modern' fuels as kerosene, liquified petroleum gas (LPG), and electricity. But in the past three decades, urban populations have exploded as migrants from the rural areas pour into the cities in search of jobs and higher standards of living. For example, according to the UN report 'World Urbanization Prospects 1990', the population of Bangalore, India grew from 1.2 million to 5 million between 1960 and 1990; that of Lagos, Nigeria leaped from 0.8 to 7.7 million within the same time period. The UN report estimated that by the year 2000, there will be a total of 28 cities with populations of over 10 million, of which 22 will be in the Third World. 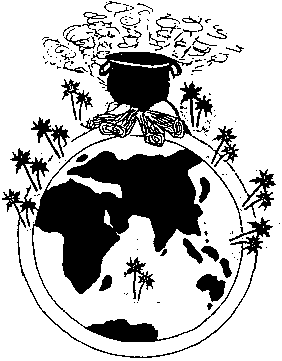 Despite the availability of the 'modern' energy sources to some of the city dwellers, the majority of migrants cannot afford them. Wood remains their fuel. But instead of collecting it, they now must buy it from vendors. When unemployment rates rise and real wages decline, as they have in Sierra Leone, Kenya, and Zambia, purchasing fuelwood becomes difficult.

Biomass traders search for wood in communal woodlots, and consequently procure it as a 'free' commodity. The price of the wood, which represents only the transport costs and traders' mark-ups, excludes the production and replacement costs - at the expense of rural people and the natural resource base. After decades of woodland exploitation in some areas of India, Pakistan, and Bangladesh, the shortage of firewood in rural areas has become so severe that villagers are compelled to use cow-dung, dried leaves, and grass for fuel. The fragile soils of the farmlands are thus denied essential nutrients and organic matter.

Villagers are working hard to reduce the exploitation of their resource base by the urban entrepreneurs. For example, in a village not far from Niamey, the capital city of Niger, residents decided to charge traders for wood taken from their communal land. Extension agents were brought in to train the villagers in negotiating wood prices, maintaining accounts, and establishing an agroforestry project. The revenue from wood sales is now used by the villagers to plant trees that will not only provide fuel for their personal use and for sale, but can be used for other purposes such as construction.

Dependence on wood for fuel is not just a challenge to economic sustainability, but a threat to Third World health. In the homes of low income families, where traditional wood stoves are widely used for cooking, adequate ventilation is often lacking. These stoves require large quantities of wood, are unable to retain heat for prolonged periods, and send much of the fuel up in smoke. Inhaled by women as they cook, the smoke has been identified as a major cause of respiratory problems such as bronchitis, and of damaged eyesight. A study in The Gambia, by World Bank energy planner Douglas Barnes and his colleagues, found that children who were carried on their mothers' backs, as the women performed their daily chores in smoky huts, were six times more likely to suffer from acute respiratory infections which are responsible for the deaths of 4 to 5 million children annually. And, according to the World Bank, between 400 and 700 million people, particularly women and children, suffer from wood smoke exposure.

Improved wood and charcoal stoves are now for sale in Kenya, India and other developing countries. Because they require significantly smaller quantities of firewood or charcoal, they are successfully curbing the wood demand, and hence promoting biomass conservation.

In the cities, as vendors travel longer distances into the hinterland in search of wood, and the transportation costs increase, more of the market is shifting to charcoal, which is easier to transport and more convenient to use in cramped urban quarters. Widespread use of charcoal puts even greater stress on the environment, however, because the conversion from wood to charcoal requires twice as much timber to yield the same cooking energy.

If the conversion, transportation and combustion processes are all taken into account, charcoal emerges as one of the leading producers of carbon dioxide - the most prevalent greenhouse gas. A meal cooked with charcoal produces three times more carbon dioxide than the same meal cooked with wood. On the other hand, charcoal can be made into a more efficient fuel by producing it in kilns that retain a higher proportion of the energy content within the charcoal. The amount of charcoal used can be reduced by the use of more efficient charcoal stoves, which control air-flow to the fuel and are insulated to minimize heat loss.

Looking for alternatives to fuelwood and its charcoal derivative, a number of communities are experimenting with solar box cookers and biogas digesters, both of which use renewable sources of energy and are pollutant-free and energy-efficient. The solar cookers and the digesters have been successful on a small and localized scale. For example, the residents of Kangra, a village in India, have managed to save Rs.1.2 per day on fuel purchase by using solar cookers made of glass, black paint and oil-tins. The savings enable a family to buy the equivalent of an extra three loaves of bread at the end of the week. The new methods have not been used on a big scale because of the high initial costs, along with a variety of cultural biases and superstitions. For example, preparing and cooking food is an evening social activity, and solar cookers have to be used during the day. Biomass digesters are similarly constrained, since in some cultures the use of human and livestock waste as fuel is unacceptable.

The fuelwood crisis is a complicated one, and the easy, large-scale solutions that were recommended originally, such as the establishment of pert-urban plantations to increase woodfuel supplies, evidently will do little, if anything, to alleviate the problem. Over the years, however, through mistakes and project failures, a few useful lessons have been learned. One such lesson - counter-intuitive though it may seem to many environmentalists - is that since biomass fuels will continue to play a major role for years to come, greater emphasis needs to be placed on finding ways to increase the woodfuel supply. Farmers, for example, can be encouraged to plant trees that will provide not only fuel but other products such as fruits, fodder, and lumber. When the new high-efficiency stoves are used more widely, the demand for trees will be reduced to a sustainable level.

This article first appeared in World Watch, Volume 6, Number 5. World Watch is the magazine of the World Watch Institute, USA.