A study in Ethiopia in 1990 showed that appropriately designed kerosene stoves cook efficiently and quickly, are easily controlled, convenient, and popular. They are friendly to the environment and the family's health, and can save some wood and trees, especially near cities such as Addis Ababa, where wood-fuel collection means half a day's walk The disadvantages are that kerosene has an unpleasant smell and can cause fires. Kerosene stoves are most suited to boiling and frying. 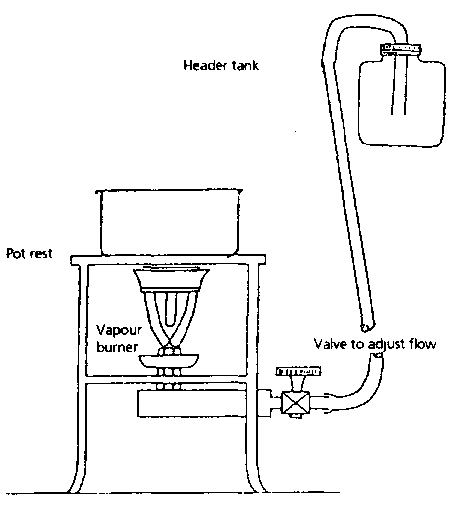 Urban homes in Ethiopia commonly have several stoves using different fuels when available, and according to the food to be cooked and the fuel price. In this situation, a prerequisite for the increased use of kerosene would be a reliable supply at an affordable price (not necessarily subsidized). The Government and the oil companies should provide these conditions and both could benefit from doing so.

There is little to choose between the two types of stove; although pressure stoves are slightly more powerful, they are more expensive, and have greater accident risks. About one million Chinese stoves - mainly wick types - have been imported in the last ten years. The informal sector has made previous attempts to make kerosene stoves but the quality was poor, and the metal was too expensive. The market prices of the Ethiopian stoves are two to three times more expensive than those of the Chinese 'Wheel Brand' stoves, and have not proved to be very popular.

Gravity feed-pressure stoves, as illustrated in the diagram above, are popular in India. If the burners could be imported into Ethiopia, the informal sector could make the rest of the stove, and the stoves would be able to become competitive in price and quality to the imported Chinese 'Wheel Brand' stoves.