There is a need to develop an appropriate technology for converting coconut shells, often used as a fuel in the rural areas, to charcoal, which is much less bulky and more valuable.

In Indonesia, Yayasan Dian Tama, a small community development group based at Pontianak, West Kalimantan, has developed a simple technology for producing coconut-shell charcoal. The technique involves the use of a 200-litre drum as a kiln, and is claimed to be the most effective way of manufacturing coconut-shell charcoal. In weight terms, the efficiency of conversion has been reported to be as high as 25%, which is twice as high as that achieved by traditional methods. Moreover, the production-time per batch is only about 20 hours, which is very quick.

The only materials needed are coconut shells and kerosene; and the equipment consists of a modified 200-litre drum, some coarse sacking, and a sieve.

The production process, illustrated below, can be summarized as follows: 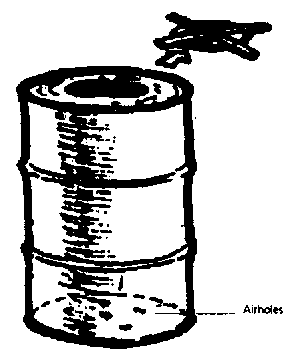 1. Make a hole with a diameter of 30cm in the middle of the top part of the drum. The small round plate removed is to be used as a cover.

2. Make small holes at the bottom part of the drum to allow the air to enter.

3. Fix a wooden or bamboo handle onto the round plate so that it will not fall in when used as a cover.

a) Put some stones under the drum (in order to let in the air), and fill one third of the drum with coconut shells.

b) Put in a little kerosene - just enough to allow the shells to catch fire, and keep the fire burning for five minutes (you will see black smoke coming out of the drum).

c) After five minutes, put the lid on the drum to put out the fire, and wait until white smoke comes out of the drum.

d) Open the lid and let the smoke out.

e) Add more coconut shell to the drum - as much as 10kg - and wait until more black smoke is emitted, which means the coconut shell is burning. Continue to do this until the drum is filled with charcoal.

After eight hours lift the drum from the stones. Fix the lid and seal the space between the lid and the drum with some leaves and mud; this will prevent smoke escaping from the drum. It is important to note that there should be no white smoke coming out of the drum, if this happens, the charcoal is likely to turn to ash. Keep the drum sealed overnight (12 hours).

f) Remove the charcoal by tipping up the drum, sieve (to get rid of the ashes), and store the charcoal in a sack in a dry place away from damp.

This article first appeared in Science for Villages, June/September 1992. 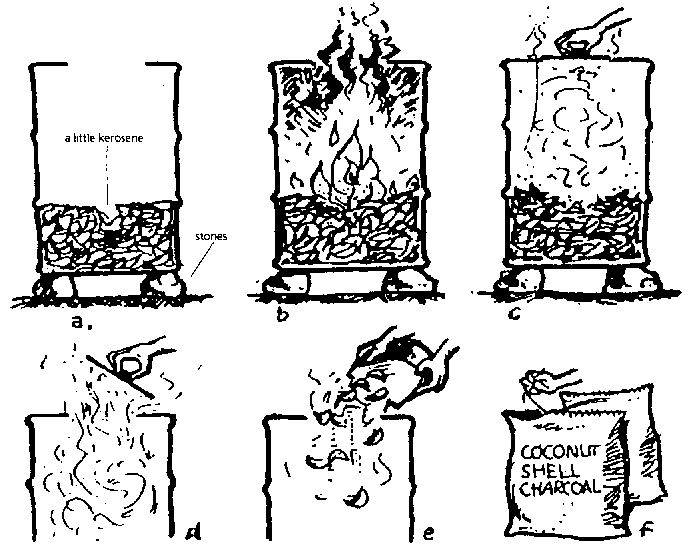