by F.B. Carleton, A. Tamir and F.J. Weinberg of

A simple ceramic cone added to a domestic gas cooker could give fuel savings of up to 40 per cent, according to researchers at Imperial College, London.

Felix Weinberg, Professor of Combustion Physics, says the conventional gas ring is often used very inefficiently. If a saucepan is too small in relation to the ring, the flames flare up around the outside and heat is lost to the atmosphere of the kitchen. 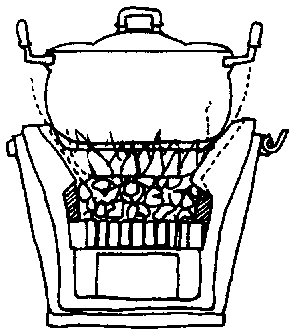 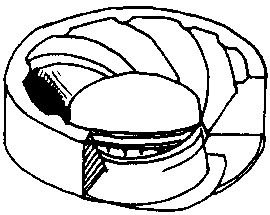 Weinberg and his colleagues decided to try to recapture the heat and direct it back towards the saucepan. Their improved gas ring burner looks like an upturned cone with the bottom sliced off. The inside wall of the cone is made of ceramic, and has ribs which curve up the inside surface. At the bottom of the cone is a conventional gas ring (see figures 1 and 2).

The saucepan is placed on the cone, and when the gas is burning it heats the pan directly as normal. But the gases that would escape nonnally heat up the ceramic so that it glows red, like the ceramic part of a gas fire, and radiates the heat back towards the saucepan. The ribs cause the flames and hot gases to move in a spiral direction inside the cone and so spend a longer time in contact with the cone and transfer more of their heat to the cone before escaping round the sides of the pan. The cone is designed to fit a wide variety of saucepan sizes.

The principle of retaining the hot gases in contact with the pot, and using a ceramic cone to absorb and radiate heat to the pot, is already used in stoves such as the Thai design shown in figure 2. The Thai bucket design allows the pot to sit into the cone shaped and ribbed combustion chamber and so increase the heat transfer but has not yet adopted the spiral rib feature.

Coir dust is the residue left after the extraction of the fibres from coconut husks. The fibres can be used to make ropes and mats, but the dust has no value, apart from very small quantities which are used as a mulch. The dust piles up outside the coir mills, and the mill-owners often pay for it to be taken away. The coir dust constitutes an environmental hazard, as it contains tannin which leaches out into the local water supply.

In Sri Lanka, a process has been developed by which coir dust is compacted into low-density briquettes, which can be burned in domestic stoves, or small industrial kilns and furnaces. ITDG is currently working in partnership with two local NGOs in southern India; the Centre for Appropriate Technology (CAT) and the Programme for Community Organization (PCO), to investigate the feasibility of making coir dust briquettes and marketing them commercially.

The production and combustion trials to date have proved successful, and the project workers are now planning to carry out more extensive field trials in order to ascertain the social and economic feasibility of increased briquette production.

Six briquetting presses will be set up in four coastal villages near Trivandrum, in Kerala District. Interest has been expressed by local women's groups, working with SEWA (the SelfEmployed Women's Association), in operating the presses. A variety of organizational arrangements will be employed: some presses will be located adjacent to the coir-pith reserves, others nearer to water sources. At some of the sites, the emphasis will be on producing briquettes for the women to burn in their own stoves, while, at other sites, they will be produced for sale to other local families. The NGO partners plan to employ a field supervises from the outset, whose role will be to assist in the installation of the presses, to liaise with the women's groups, and to assist them in solving day-to-day problems. She will also monitor each group's progress, problems and achievements, and will survey the reactions of the briquette users.

In order to maximize the degree of control that the groups enjoy over the project, ITDG and CAT plan to adopt a 'hands-off' approach, encouraging the women to take on as much responsibility as possible. In the case of particular technical problems, however, the supervisor will be able to call on the services of ITDG and CAT.

The briquetting presses will be installed this year and in 12 months' time ITDG will carry out an evaluation of the success of the project, and will make recommendations concerning continuation and/or extension of the activities.

Coir dust is brought from the coir-processing factory, approximately one kilometre away, to the compound where the briquetting press is located. The dust is free, but transport, loading and unloading costs add up to around Rs.150 for one month's supply. This cost is met by the project.

Two women fill a large aluminium bucket with coir dust and carry it between them to the building which houses the press. Here the dust is emptied on to the floor. The women scoop water (the run-off from previous pressings) from puddles on the floor into the bucket, and mix it with lime (1 per cent of the volume of the coir dust). This mixture is poured on to the pile of coir dust and mixed in thoroughly, by hand, which is the women's preferred way of working.

The bailing box is assembled in the press and the bottom mould-plate fitted into place. The coir mix is then spread on to this, the second plate is fitted in, and so on until all nine plates (eight briquettes) are in place. The press wheel is tightened to squeeze out most of the water and, after several minutes, the pressure of the plates leads to a rise in the temperature of the coir mix, which, in, turn causes the fibres to bond.

In the meantime the women stack the briquettes from previous pressings, and spread them out to dry in the sun; they also bring more pith into the press room and mix it with water and lime.

After ten minutes the press wheel is unscrewed, and the front of the bailing box removed. One by one, the mould plates are prised free, placed face down on trays, and hammered lightly to release the briquettes. The press is then loaded again and the cycle is repeated.

When two women work together the whole process can be carried out nine or ten times a day, and they are able to produce 70 to 80 'slabs' of briquettes (each measuring two feet square) per day. Putting the briquettes out to dry in the sun, then stacking them away at the end of the day, is a laborious task which reduces productivity. Storage space is crucial, as it takes three to five days for the briquettes to dry completely.

At present, the project pays the women Rs.20 per day for working on the press; and the briquettes are being distributed free to households in the village, for a trial period. Ultimately, it is hoped that in time the producers will be able to earn more than this from selling the briquettes, but clearly this depends on both establishing demand, and maximizing productivity.

The users' reactions thus far have been mixed. In principle, villagers are pleased to have an alternative source of fuel available, but they have certain reservations:

-The briquettes cannot be burned in place of firewood, but only as a supplement.

-They are very smoky when used. This makes it important for the project to establish and demonstrate the most efficient way of using them.

-They are very messy. If small pieces are broken off, the briquettes tend to crumble and scatter dust on the kitchen floor.

While the production of coir briquettes is clearly technically feasible, the economic and commercial viability remain unproven. Technical improvements, such as those outlined above, will help to increase economic viability. The widespread acceptance of the briquettes may be, above all, a question of time and habit.