We were somewhat surprised and disappointed to find that the December 1992 issue of Boiling Point, while optimistically titled 'Household energy developments', was dedicated almost exclusively to the discussion of stove technologies. This topic offered considerable opportunity to introduce a range of original issues related to household energy such as health, safety, hygiene, women's burdens of labour, and domestic-income availability, but it seems that most people working in this field adopt an approach which is still very much concerned with the promotion of stoves. Such a bias towards the technicalities of these appliances is not, in our opinion, helpful in tackling householdenergy problems.

While the successes of stove-dissemination projects in some urban areas cannot be denied, with positive impacts on living conditions and family cash flow, we question the appropriateness of anything more than the simplest technologies for the majority of rural households. The articles in the December issue (and countless studies of stove projects elsewhere) make it clear that most rural people have little interest or inadequate finance with which to purchase stoves. In fact the open fire offers them a free, versatile tool for cooking, heating, lighting, and keeping away insects. This suits the low-income rural household very well. Would the efforts of NGOs and others not be better directed at improving the way open fires are managed, with the aim of not only reducing firewood consumption, but also speeding up cooking, and improving health, safety and hygiene in the kitchen?

We observed a number of other misleading assertions in the articles, the most noticeable of which was the repeated claim that fuelefflcient woodstoves save trees. It is now well-known that firewood collection by rural people, generally, has negligible impact on standing trees - although for urban consumers and institutions the case may be different. Therefore rural stove programmes are not likely to reduce rates of deforestation.

We hope you find the article on domestic energy conservation, which we recently submitted, of interest, and worthy of inclusion in your next edition.

Thank you for your letter and sample copy of Boiling Point.

Paul Kennedy's latest book Preparing for the 21st Century gives a clear outline of the problems faced by the developing world, and ultimately by us all. We conclude from the writing of this historian that better wealth distribution, inclusive of technology, food and fuel provision for the Third World will have to gather pace fast, and we feel that, for the first time, there is broader understanding by populations and governments in the richer countries, that charity activities and various aid programmer are no longer sufficient, and must be followed by a global approach to agree administration and fair distribution of resources for mankind as a whole.

We have been involved in fuel technology and briquetting research since the early eighties, covering refuse-derived fuels, smokeless open-fire fuel and barbecue fuel.

In an ideal world, the population of the richer countries should see its way to pay a special tax which could go into an international fund for the provision of irrigation, modern agriculture, energy-efficient cooking stoves and good performance/low-pollution alternative fuel to replace wood and charcoal. A proportion of such a tax could also be used for technology dissemination and training for the Third World, to get away from continuous 'hand-outs', resulting in the people producing and managing goods and consumables by themselves. They must be allowed to create their own functioning economies; only then can a wealth of creativity, goodwill and enthusiasm be unlocked.

'World Economy Studies' should be added to the school curriculum of the children in the richer countries from an early age, so that they grow up understanding the social need for everyone to become involved in planning a fair global economy. It is far too late to leave such education for the relatively few students in colleges and universities. 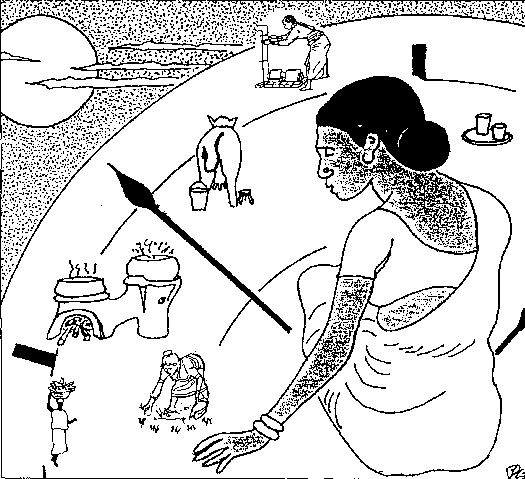 How does she fit all her tasks into one day?

If you have any technical enquiries, ITDG's Technical Enquiry Unit (TEU) should be able to help you. The TEU has extensive contacts within the UK and Europe, and can respond on a wide variety of topics. If your enquiries are about stoves or household energy, then our stove team can also help.

Contributions are invited for the next three issues of Boiling Point, the themes of which will be:

Articles for issues 33 and 34 should reach this office by the end of February 94, and the end of June 94 respectively.

Contributions are welcome in the form of articles of not more than 2000 words including line drawings, photographs, simple graphs etc., where appropriate. All correspondence should be addressed to Boiling Point, ITDG, Stoves and Household Energy Programme, Myson House, Railway Terrace, Rugby, CV21 3HT, UK.

To our readers and contributors The Boiling Point Team

Tammy Flavell, our Production Manager, has left ITDG to study for a degree in European Studies at the University of Aberystwyth in North Wales. This has been her ambition for several years and we wish her every success, despite regretting her departure. Although many of you have got to know Tammy very well in her five years of Boiling Point management, I am sure you will find her successor, Clare Heyting, equally helpful and efficient. Our two social scientists, Emma Crewe and Caroline Ashley, have both married and moved on - Emma to lecture at Sussex University, and Carolineto work in development planning in Namibia.

(Readers wishing to enter into correspondence with authors may obtain full postal addresses from the address given above.) ISSN: 02633167

contribute to the long-term development of them communities.

Intermediate Technology is a British charity mainly funded by the Overseas Development Administration. 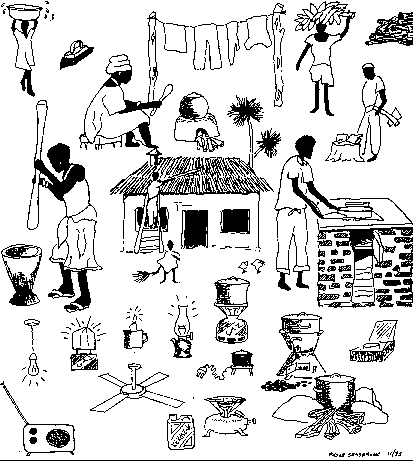