Adapting to the energy shortage on Rusinga Island

Rusinga Island, on the edge of Lake Victoria in western Kenya, is suffering a severe fuelwood shortage. In response, local people have diversified their cooking methods, shown flexibility in the fuels they burn and the sources used and have employed a range of novel conservation techniques. This has happened in the absence of external interventions, and can be recommended elsewhere in anticipation of similar shortages, not only saving fuel but also improving conditions in the kitchen.

As a result of rapid population growth, it has been necessary for the inhabitants of Rusinga to continually expand the area under cultivation. Only hilltops still remain under natural bush, and the island is now largely bare of natural vegetation. Firewood is in extremely short supply, creating severe problems. 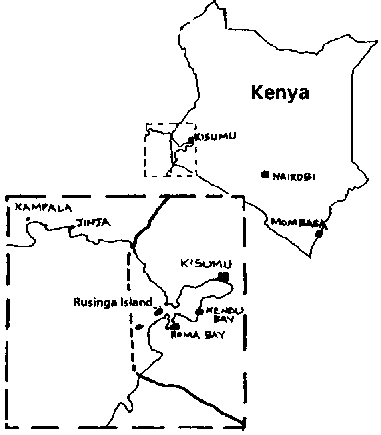 The staple food is ugali, a stiff porridge prepared from maize, millet, cassava, or a mixture of these. This is supplemented by green vegetables such as cabbage, kale or green grater., and fish when available. As an alternative to ugali, rice, potatoes, cassava and nyoyo (maize and beans) are commonly cooked. Thin, millet-based porridge is normally eaten for breakfast, or perhaps sweet potatoes.

In May 1993, a domestic energy survey was carried out in Rusinga, by the Bellerive Foundation, to assess the severity of the fuelwood shortage, local adaptations to it, and potential interventions for the future. The study involved a total of 39 households in six villages, selected randomly. 26 of those interviewed were female, nine male and, in four cases, a man and a woman were interviewed together.

The results of the survey show a startling degree of local adaptation to the fuelwood shortage. Rusinga residents have modified their traditional systems of cooking considerably, in response to diminishing firewood supplies.

Diversification of stoves and fuel

All the households interviewed rely on firewood for cooking. The preferred system is a local innovation: the Kendo mudstove - an arrangement of three stones which is protected from draughts by a U-shaped wall of dried mud and dung. This mudstove, pictured below, is used by 77% of households on Rusinga, the remainder using open fires. Cooking is usually done outside on the mudstove in good weather but most families also have a three-stone fire or a second mudstove inside the house as a 'back-up'. No improved woodstoves were observed, although occasionally a charcoal stove was seen to be used with firewood.

Although all families use firewood, 87% have another cooking system in reserve which they employ if firewood is in short supply, the weather is particularly wet, or a meal must be cooked in a hurry. The most common fuel-alternative is charcoal, used in a traditional metallic stove by 67% of families, or in a Kenya Ceramic Jiko by about 8%. Locally made kerosene wick burners are also used for cooking by over half of those surveyed, although they are designed principally for lighting.

The result is that some families have up to five cooking systems available to them, including outdoor and indoor mudstoves, an indoor three-stone fire, a charcoal stove and a kerosene wick burner. About 8% of those surveyed also have an outdoor trench fire which they use on an occasional basis for fish smoking.

Firewood is in very short supply and the quality is poor. Families are extremely flexible in the type of fuel they burn - for example, twigs, small sticks and even roots are burned, in addition to fast-growing shrubby tree species.

Most households get their firewood from a range of different sources, depending on availability. Their own farms are commonly a source of shrubs and live wood. They may also get fuel from neighbours, although this must be paid for. The lakeshore is a source of driftwood and logs if the winds have been favourable, and there are still some areas of uncleared land on the hilltops which are used illegally by those who have no alternative but to climb up in search of fuel.

About half of all families buy firewood on an occasional basis, although none rely solely on purchased wood throughout the year. Bundles are sold by hilltop-dwellers who have bushes remaining on their land which they clear and sell to Rusinga families or fish-smoking businesses. Charcoal is used by three-quarters of the families when firewood is unavailable; this is sold both in 2kg tins and by the sack.

Because of the shortage of firewood, and the economic impossibility of relying on purchased fuels, many families are forced to turn to alternative biomass fuels which need close tending and generate considerable quantities of smoke. About half report burning maize and millet stalks, and maize cobs, on a seasonal basis, and half use cow dung; the dung is used mainly for domestic fishsmoking, but sometimes for cooking.

Local people use many different conservation practices in an effort to minimize firewood consumption. Several of these also reduce levels of smoke and contamination of food with dirt and ash, thereby improving kitchen health and hygiene:

-90% of families store their firewood for drying before it is burned, either in the sun or above the fire.

-Three quarters of the families protect their cooking fire by lighting it in a small depression surrounded on three sides by a wall of mud and dung: the Kendo shielded mudstove.

-One third pre-soak certain foods, generally maize and beans, and particularly nyoyo. Most of those who do not, say that pre-soaking impairs the flavour of the food, and cook nyoyo in heat-retaining clay pots instead.

-Nearly half the households use tenderizers regularly in their cooking. The tenderizers are either rock salt, or water filtered through ash. Hard vegetables such as green grams are the most commonly tenderized foods, although maize, beans and fish are also tenderized occasionally.

-Two thirds of the families cut up certain foods into small pieces to reduce cooking time. This is normally done with potatoes, cassava and matoke (plantain).

-All families cover their pots with some form of lid, to retain heat and keep out dust and ash; it is also common to place a stone on top of the lid. The 'lid' may be a metal plate, a clay pot, or even a metal pot containing water, which can begin to heat up slowly using excess heat from below.

-The fire is usually extinguished as soon as cooking is finished by removing unburned pieces of wood. 87% of families use this conservation method at least some of the time.

The Rusinga survey shows that rural people using traditional cooking systems are able to make considerable adaptations if necessary, as a result of energy shortage. Such adaptations should be recommended elsewhere in anticipation of similar shortages, as they not only save fuel but actually improve conditions in the kitchen .