The purpose was to look specifically at household-level decisions on energy use, that is, to put energy use in a specific cultural context and to understand both what these households are (how they are constituted and organized) and the social context in which all resource-related decisions, including energy, are taken.

The survey results, based on 28 households, identified five broad issues for further investigation:

-perception of fuels and actual fuel use;

If one excludes the expensive 'villas' that have been built in the last 10 to 15 years, there is a marked similarity of residential-house design in Dar es Salaam. The bulk of house construction including self-built, artisan-built, and units constructed by commercial companies and the government - are based on a standard two, four, or six room 'Swahili house' shown opposite.

The Swahili house is the dominant urban house-form, which provides a basic physical layout incorporating a set number of paired private living areas/bedrooms sharing a common hallway. These hallways provide sheltered space for cooking and socializing. For the majority of women living in Swahili houses with shared corridors, cooking in or near one's room makes it possible to socialize and keep an eye out for one's children and one's possessions. It is unlikely that a separate unit for cooking would be the best way to meet women's needs in these circumstances.

Although cooking usually takes place in shared social space or outside on a veranda, smoke is seldom reported as a problem even by those who burn wood. Most smoke either goes up through the rafters and is vented out under the roof, or drifts out through the doors or over the tops of walls. The majority of women follow custom, and cook on the ground (the one exception was a high-income household which owned a modern gas cooker, but even in this house, most cooking was done on the front veranda using a kerosene stove). The minimum requirement for cooking is shelter from sun and rain (either a thatched open shed, or simply a covered veranda). 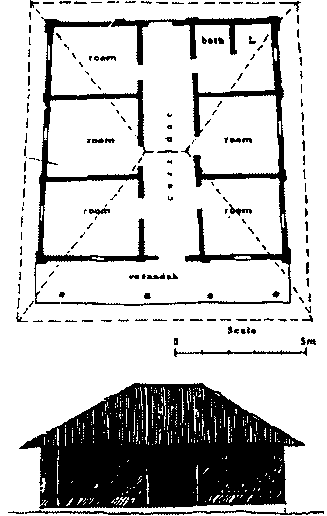 Nearly all the major cooking utensils will be arranged around the hearth and/or the cooking device. These normally include a set of between four and nine suffrias (aluminium cooking pots of varying sizes with lids). Aluminium cooking pots, in almost universal use in town, are reported to have been used for many years ('always') by the older women. Because of the rising cost of these pots, which burn out within one to three years, (quoted minimum replacement costs were TSh350-600 per pot), they are usually replaced one at a time.

Food preparation and cooking practices naturally tend to be related to the staple food consumed by the household. In the majority of cases this is maize-meal ugali. The process of cooking ugali starts by boiling water with the lid on; otherwise lids are seldom used except when cooking rice, even though the women know their value in reducing boiling time.

The other major staple food consumed although by a minority of households, is rice. Rice is usually cooked with coconut water, and is allowed to soak in the water during the time it takes to grate the coconut meat for cooking (perhaps 10 to 15 minutes).

Table 1. Choices of fuel for cooking.

Characteristically, the women preferred to cook over a high heat and to use a stove and fuel which would allow them to shorten cooking time as much as possible (i.e. kerosene). Few women reported noticing any difference in taste that could be attributed to the use of a specific fuel. It was emphasized repeatedly that the key criterion influencing fuel choice for women was its cost. Cost, in this context, has several interrelated components:

-the time required to cook (with a specific fuel); a fuel's 'dirtiness' and the time needed to clean up after cooking;

- whether a specific fuel required the use of a purchased stove (and its price);

Most households also bought kerosene for secondary use either as a lighter-fluid to start the main fuel (wood or charcoal) or for use in kerosene lamps. Most households tended to light three fires a day, and most also reported that they extinguished or smothered unburned wood or charcoal in order to reuse it later. The preference of women for boiling tea on a kerosene stove and to use wood or charcoal for cooking food underlines the concern with controlling fuel use: kerosene requires only a few minutes to boil tea and does not necessitate laying a fire.

Major and secondary fuel use

Information was also sought on the fuels and stoves used for cooking and for any other cooking-related tasks (this meant, primarily, boiling drinking-water; no one reported burning fuel for space heating). Households usually had a clear preference for certain fuels, illustrated in Table 1.

'Major use' means the fuel which is used to cook lunch and dinner, while 'secondary use' means the fuel used to boil breakfast tea (primarily kerosene), and/or the 'last resort' fuel when the household has insufficient money to purchase the preferred fuel. As discussed below, fuel choice is determined primarily by price (how much would be required to cook the day's food) and, implicitly, the money available to the women to buy fuel and food. It is important to note that five out of six households which do not use a secondary fuel are completely dependent on wood.

With the exception of wood and waste, most fuels are available locally throughout the city, either in local shops or from itinerant sellers. All other fuels are sold by traders, with supplies varying by location and/or seasonally (for example charcoal supplies decline during the rains). 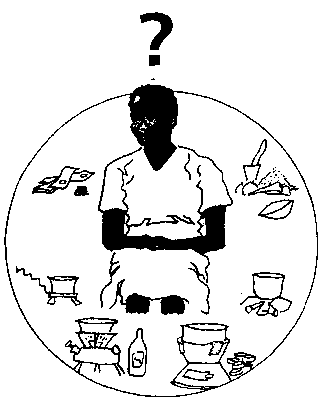 Fuel preferences are difficult to establish, primarily because relatively few of the sample households had experience of all fuel types (with the exception of wood), nor even a general knowledge of LPG or electricity. Ten of the 17 households were connected to electricity. Women were asked to rank different sets of choices, based at least partially on non-comparable experiences; the key factors in order of priority were stated as: fuel price, convenience/supply availability and, to a limited extent, 'aesthetic' grounds (smokiness, dirtiness, taste etc.). Thus, while actual fuel purchases reflected directly the disposable income available to women (who nearly always purchase fuel) these preferences reflected a desire for access to a convenient fuel if cost were not a constraining factor. The first choice was kerosene; with charcoal and wood taking equal second place.

The fundamental criteria by which women assessed alternative cooking fuels depended on that fuel's purchase price, vis-a-vis other fuels, and/or the price of the necessary cooking device. Thus, a two-burner electric hotplate sold for TSh2000 was out of reach to the majority of households, even though some women knew that electricity was far cheaper to use than any other fuel.

It is impossible to assess accurately what proportion of disposable income is spent on fuel and, therefore, to assess stove costs as a proportion of household income. It is possible in some cases, however, to compare the stated daily expenditure on fuel with the stated purchase price of the stove currently in use, although this, obviously, excludes households which rely on a three-stone fire.

The figures in Table 2 do not allow conclusions to be drawn concerning whether the choice of stove (i.e. its purchase price) is related in any way to disposable household income (data is available only on one kerosene-using household). It appears, however, that a woman's decision whether to purchase a stove may be determined only partially by market prices. Her views are also shaped by cultural values deriving from rural cooking practices and culinary traditions; and a shared (gender) perception of negotiation and compromise with her partners over the use of household income.

Observations of food preparation indicate a small number of ways in which some fuel conservation might be achieved. For example, no household pre-soaked red beans before cooking, and only five households pre-soaked rice. In the majority of cases, women believed that pre-soaking altered the flavour of the beans (usually for the worse). Some also said, however, that pre-soaking was unnecessary (they were able to buy good, i.e. easy-to-cook beans). They did not appear to know that this practice could shorten boiling times. The women who pre-soaked rice did so because they were following traditional preparation techniques to impart the flavour of the coconut, not to shorten cooking time.

The majority of women knew the advantage of using lids, but it seems there is some difference between women knowing a useful practice, and actually implementing it.

The survey showed that nearly every woman prefers to cook most foods on a high flame, stating a preference for boiling rather than simmering. Ugali must be cooked on a high heat as it

stiffens into a thick porridge; but this was also the normal practice for rice and beans. There may be some room (via home economics education?) to reduce fuel consumption by simmering if, at the same time, better stoves also meet a woman's need to reduce cooking time as much as possible. It may be that a preference for a high flame, and the stated desire to cook as quickly as possible (though this would also include time spent cleaning pots) are related, and reflect not merely the drudgery of cooking, but also the desire for more free time (since most women were not selfemployed, however, it is unclear whether this is a social or an economic requirement).

On a related note, seven out of nine charcoal users reported that they smothered and re-used coals, as did two out of the five women who burned wood (some said they were able to judge the necessary quantity to burn which did not leave embers). At the same time, six households use the residual heat to boil drinking water, while the remaining ten households do not boil water.

It may be that improved jikos (KCJs), which many women have heard of but few have any experience of, have a role to play in conservation. Only one (upperincome) household has been using a KCJ; women tended to consider them too expensive and/or were unsure where such stoves could be obtained. At TShl300 each, with a potential to save 50% charcoal, such stoves should be disseminated more widely, although it is likely that only better-off households, or women with their own incomes, will be in a position to purchase them.

It seems clear that women exercise a variety of strategies concerning fuel use, ranging from reducing existing levels of fuel use, to shifting between fuels on a daily/weekly basis in accordance with variations in household income and female bargaining power, reliance on free or scavenged wood/waste and, finally, to switching out of non-biomass fuels altogether for charcoal or wood.

Energy-conservation activities, including improved-stove projects, are often based on the assumption that fuel-related decisions are purely rational, economic decisions. This report makes it clear that such assumptions are invalid for contemporary, urban Tanzanian households. Women's choices, which may seem irrational to outside observers, are based on a complexity of factors, and may be rational from their point of view.