An Indian Urjagram, or 'energy village', tries to be self-sufficient in the provision of all its energy requirements. In 1987, the Gujarat Energy Development Agency (GEDA) started the Kalyanpura Urjagram project. Kalyanpura was the faith village in the state of Gujarat to become an Urjagram, and today all village requirements are

GEDA was set up in July 1979 with the aim of developing a systematic programme to promote the use of new energy sources. This led to the foundation of the Department of Non-Conventional Energy Sources (DNES) in 1982. GEDA was then placed under this central government agency.

DNES co-ordinates various alternative energy programmes. So far solar, wind and biogas projects have been started. Another programme has been set up to promote the use of an improved cooking stove, the much used chulha, among the Indian population. DNES encourages an integrated energy approach, whereby use is made of various forms of energy which are locally available, and this concept of integration is behind the Urjagram Programme. An independent research bureau puts together an 'energy package'. The choice of energy forms is then made on the basis of findings from a survey of local energy requirements and available energy sources (see Table 1 below).

DNES generally chooses isolated villages for the Urjagram programme. It is in these villages with no electricity that the returns on alternative energy sources are highest. If there is electricity, then it usually only provides 5 to 10% of the energy requirements. Electricity is generally used for lighting and irrigation but is not sufficient for cooking. In rural areas, 86% of the total energy use is for cooking. Two thirds of cooking fuel is obtained from firewood gathered by women and the rest is from cow dung and agricultural waste. In an Urjagram the emphasis is placed on more efficient use of wood and on the search for alternative energy sources for cooking.

On the dirt road which links Kalyanpura to the outside world, there are two solar panels, consisting of photocells which generate 4 kW of energy per day. As illustrated in Table 1, this energy is stored in batteries which provide the villagers with electricity for a television and street lighting, and each household with two lights. In all, the village now has 100 indoor lights and eleven street lights which are lit by electricity from the solar panels.

Each family had to pay an initial sum of Rs. 50 (Rs.40 = Ł1) and now pays Rs.5 per month for each lamp. Previously, a family spent, on average, R.36 per month on kerosene. The money is put into a collective 'pot' which is used for the maintenance of the solar panels, the batteries and the lights.

As well as the solar panels, the village also has two solar distillation boilers. These provide approximately 2.5 litres of distilled water per day which is used for batteries. There is also a solar hot water system which provides 250 litres of warm water (60°C) per day. It is estimated that this saves about 2600kg of wood per year.

Under the programme, each household in Kalyanpura is also entitled to an improved chulha. This is a cooking stove which makes more efficient use of fuel. On average it uses 15% less fuel than an 'open' wood fire. The chulhas not only save wood, but are also healthier to use, as no smoke escapes into the house. One of the most striking ideas to be tried out in the village was that of the fuelwood-generating forest. In 1988, fast-growing trees were planted on waste land that was unsuitable for agriculture. This forest now yields about 150 tonnes of wood per year: more than enough to supply the wood requirements of Kalyanpura. 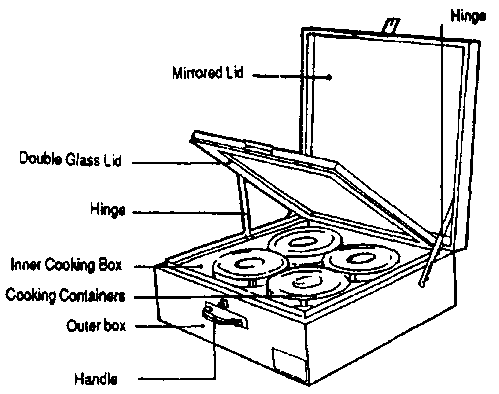 In Kalyanpura, seven families and the village school each have a solar cooker, which has been developed and improved over the last six years by the Department of Home Studies in Baroda, under the supervision of Dr Rachel George. The new Surya cooker (surya means sun) weighs only 12kg and is compact enough (52cm x 52cm x 19cm) for one person to lift easily.

The cooker is large enough to provide food for a family of four to six people. Sunlight falls on the mirror and is reflected into an insulated box, where pans of food simmer; the advantages of

this method of cooking are that no nutrients are lost and the food cannot burn. In the summer months, the temperature in the box rises to between 110 and 120°C, which is sufficient to cook all the food for one family. In the winter months, the cooker can only be used between 9am and 2pm, and the food takes longer to cook. During the monsoon, the sun is too weak to allow the use of the solar cooker. Depending on the type of food, cooking takes between one and four hours. Use of the solar cooker can save up to 55kg of wood per year.

If a family uses a solar cooker, this will always have to be supplemented by the use of a chulha or biogas-burner. Biogas is the third main energy source used by a number of families in Kalyanpura for cooking. Families with at least four buffaloes are entitled to a biogas installation: in some cases several families make collective use of an installation. Biogas is manufactured from cow dung and organic waste and provides sufficient energy for the cooking requirements of a family of six to nine people. The nitrogen-rich slurry left over after the production of biogas can be used as fertilizer for agriculture. Biogas is not only a way of saving wood, but also a means of increasing agricultural yields.

Another alternative energy source can be found by the village well, where a biogas engine has been installed, which runs on wood and agricultural wastes and drives an irrigation pump.

In 1990 there were 140 Urjagrams in India with another 239 planned for 1991. The Government's aim is to develop one Urjagram in each taluka (a cluster of villages within a district).

A separate department of GEDA organizes extension activities on alternative energy sources for groups such as schools and women's organizations. A film about Kalyanpura is brought to other villages in Gujarat with a video-bus. In the long term GEDA hopes that these extension activities will also encourage villages to adopt alternative energy sources themselves. Chulhas and solar cookers are now available in shops and markets.

This article first appeared in AT Source, Volume 20, Number 2.