SARVODAYA GIVE PRIORITY TO HEALTH AND SAFETY IN SRI LANKA KITCHENS

Improved domestic cooking stoves are frequently promoted on the basis of reduced fuelwood consumption and the aspects of domestic safety and improved health benefits of these stoves are often not given the importance they deserve. Very often these latter benefits are of greater perceived importance to stove users, especially those who Bather locally available waste wood from home gardens and nearby plantations.

The Sarvodaya Shramadana Movement of Sri Lanka has a small but well established stove project at its Kandy District Centre, situated in the lower hill country of central Sri Lanka. The project developed the Sarvodaya two piece stove (see Fig. 1), a simple two pot chimneyless stove consisting of a two piece ceramic liner which is surrounded by a neat, durable stove which is capable of giving 30% fuel savings and is an attractive asset to a kitchen. The stove has been disseminated by Sarvodaya in Kandy District for about 5 years in its present form and the design is well accepted enough to be adopted by the Ceylon Electricity Board for nationwide dissemination.

Sarvodaya is involved in a number of rural development programmes, including pre-schools, health education, water supply and sanitation. Sarvodaya relies on its trained volunteer workers, who are mainly women, who introduce new ideas into their own village communities and get people to participate in their own village development activities. The approach is very much at a grassroots level and this has tangible benefits for marketing and follow-up of stoves. 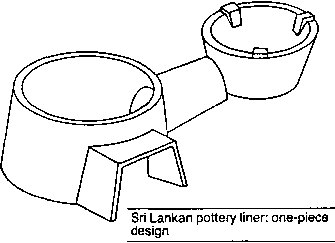 The stove is introduced as part of this general development approach and the health and safety benefits are explained. They are as follows:

1 Smoke reduction. Although a chimneyless stove, the greater combustion efficiency of the stove when properly used means that it should produce virtually no smoke and soot once fully warmed up. With one small fire heating two pots, smoke volume is reduced. Smoke escapes only at one end, around the back of the second pot, and ideally the stove is situated under an open chimney flue. Most people in rural Sri Lanka prefer some smoke and heat available for drying firewood in what is at times a high rainfall area; also some need to smoke or dry food or sheets of rubber from local trees.

2 Hygiene. As the stove is not portable, Sarvodaya tries to encourage the idea of building a concrete or brick/clay table for the stove so as to move the cooking activity up away from the floor where dirt, stray animals and vermin present health dangers. The benefits of storing food and cooking utensils off the floor are also pointed out.

3 Reductions in burns and scalds. The traditional hearth of three stones as pot supports with surrounding clay is a fairly unsafe way of holding a hot cooking pot. Its danger to children, especially when situated on the floor, is obvious. The improved stove is designed to hold the mostly used round bottom pot more securely, especially the pot over the firebox which fits in a dished opening to seal against smoke. The traditional hearth is more open and requires a larger fire, therefore flames can escape from around the pot quite easily and clothing

(especially a sari) can easily catch alight. The Sarvodaya stove encloses the fire effectively, the door is small and is designed to keep the flames in the firebox, and in a correctly used stove flames should not escape beyond the second pot as this is some distance from the firebox linked by a connecting tunnel.

4 Safe drinking water. A two pot stove requires that two pots are always in place for maximum efficiency in use. If only one pot is required for cooking at times, why not put a pot of water on for boiling? No extra fuel is needed.

Sarvodaya field workers point out all these advantages to new users. From this starting point other, domestic hygiene improvements can be initiated.

Here the problems are different but the health and safety objectives are the same. Most of the tea estates are in the higher hill country, between 1000 and 6000 feet, where rainfall is high and low temperatures frequent. Therefore a stove is required which gives space heating as well. Kitchens are poorly ventilated and link directly to the one room living quarters under the same low roof. The fuel used is mostly prunings from old tea bushes, which is a low quality fuel and produces a large quantity of acrid smoke. There is a high incidence of eye and respiratory disorders because of this. The Tamil tea estate workers, mostly originating from South India in the time of British rule, have different traditions and favour a different design to that of the Sarvodaya ceramic liner stove. They are also known for adapting previously tried designs to be almost unrecognisable and a lot less efficient, so it is important that stoves conform with the critical design dimensions. The demands of the programme are for low cost and long lasting stoves as replacement or costly maintenance are unlikely to be carried out later. Therefore, the stove for this purpose is a simple two pot chimney stove (see Fig. 2), constructed of bricks and clay with a flat top made of 16 or 18 gauge galvanised steel sheet. Once the design is proved to be appropriate, cast-iron tops will be made. The smoke is almost completely eliminated from the inside of the house as both pots seal against smoke and the chimney is effective, with simple draught control. Only the tradition of lighting the fire slightly out of the stove door allows some smoke to escape. This, plus the metal top gives some space heating. Other health and safety benefits are similar to those of the ceramic stove. 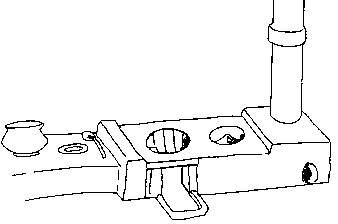 The Sarvodaya approach to development has many lessons for the introduction of improved stoves into different communities. The grass roots approach, while at times slow and inefficient, does ensure that a design is in accordance with traditions and that health and safety as well as fuel conservation needs are met and understood. With introduction, advice and monitoring done by local women community workers, it is more likely that the appropriate design is arrived at and that the stoves are actually used and become popular.