As a follow up to KENGO Regional Stoves Workshop held in Nairobi, Kenya, a team of Malagasy Ministry of Energy (MIEM) and KENGO stoves personnel visited Burundi from 27th May to 5th June 1987 as part of KENGO Regional Wood Energy Exchange Programme. The following is the summary of findings of the exchange visit.

Bujumbura Urban Development (DUB) Household Energy project is the most active urban stove endeavour in Burundi. Started in 1981, the objective of the DUB stove project is, in a nutshell, to replace the widely used all-metal charcoal-burning traditional stove, "Imbabura", with an energy efficient, durable and socially-acceptable alternative.

Almost identical to the "Foyer Malgache" which is found throughout francophone West Africa, the Imbabura (Fig. 1) has numerous disadvantages: 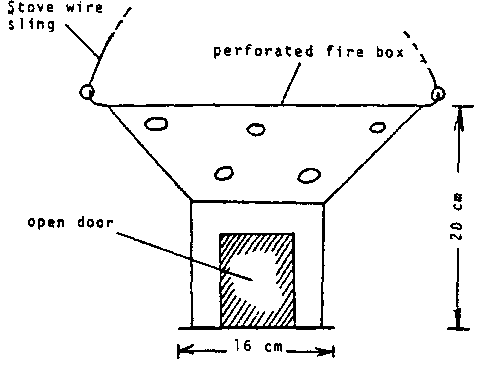 - Instability due to a narrow base, a safety hazard to the unwary child.

- Absence of pot rests, the cooking pot sits directly onto the charcoal resulting in poor combustion of fuel and damage to the pot.

Poor combustion due to uncontrolled air intake, an important contributor to the Imbabura's ineffiency.

- Short lifespan, which can be as little as 3 months, due to the direct contact between the Imbabura's metal fire box and burning charcoal.

With all the above disadvantages, replacing the Imbabura should be easy. The catch is the "price". Pegged a. 150 FBu (12 US$), the Imbabura is affordable to even the poorest section of Burundi's urban populacy. Add social resistance to change and difficulty of penetrating the ever-elusive artisanal production/marketing networks, and replacing the Imbabura is no longer so simple. It is these very problems that currently confront DUB Stoves project.

With the help of World Bank consultants, DUB developed over 11 Improved Stove (IC) models. DUB10 (Fig. 2) was eventually selected for wide scale dissemination. It is an all-metal stove with 6 major components:

(ii) perforated metal charcoal basket in which the grate sits

(vi) two wire slings from which the charcoal basket and the external cladding hang. 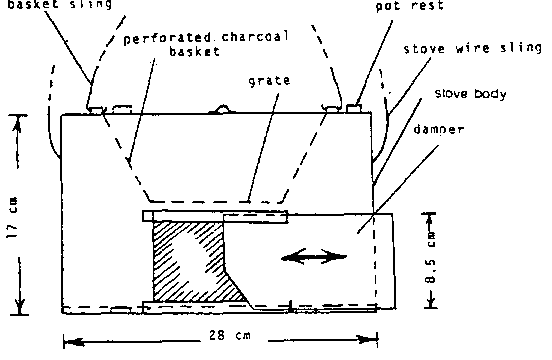 In controlled cooking tests, the DUB stove recorded savings of 45% over the traditional Imbabura. The air retained between the charcoal basket and the external cladding provides a measure of insulation thus increasing the DUB fuel efficiency. Flexible power output of the DUB stove, a direct result of the adjustable slide-door (damper), contributes to its enhanced efficiency.

Detachable and replaceable grate and charcoal basket lengthen the lifespan of DUB stoves. The external cladding has an expected lifespan of two years. The detachable grate/charcoal basket assembly that hangs on a wire sling enables users to swing the loaded basket in the air thus hastening charcoal ignition, the traditional way of getting the Imbabura started.

To produce its ICs, DUB procures all the necessary raw materials (scrap metal, rivets and wire) for its artisans and pays them 150 FBu per completed DUB10 stove. DUB then sells the stoves through its 4 stalls at the 4 major markets of Bujumbura for 250 FBu apiece. A small number of DUB10 stoves are sold through a health centre, DUB mobile van, a Women's Association bureau and at the DUB workshop.

There is no specialisation in production, each artisan makes his own stoves. According to the DUB Stove Project Co-ordinator, Ms. Perpetue Bwashishima, the artisans resisted attempts to introduce a measure of work division. As a result, the productivity has remained stagnant at 34 DUB10 stoves per day which is considerably less than the 10-12 Imbaburas, a skilled artisan can make in a day. A recent study showed that a DUB10 producer earns 450 FBu/day while his counterpart producing traditional Imbaburas brings in close to 700 FBu/day, a 55% difference! This is supported by the artisans who clearly prefer making Imbaburas.

"That is exactly why I can't get the artisans to produce the DUB10 at their own workshops. They come here only when they are broke and desperate and leave as soon as they are through the bad patch" said Ms. Bwashishima. Consequently, the DUB workshop suffers the twin problems of high absenteeism and attrition rate, direct results of the low profit margins of the DUB10 stoves.

There are two possible solutions to the above problems that immediately come to mind. One is to reduce production costs by redesigning the DUB 10 stove to reduce raw materials requirements and/or simplify the design to cut down stove production time. In the same vein, tooling and fabrication techniques can be improved to attain higher productivity. The second option is to raise the market price of DUB10 stoves or better still let the market set its own equilibrium price (i.e. iet the artisans set the price). With the project still in its infancy, DUB finds the second option unacceptable, the fear if that a highly priced DUB 10 would quickly lose customers and lead to the collapse of the project. However, Kenya's experience with the successful Improved Ceramic Stove showed that the initial high profit margins of the stoves attracted new producers and eventually inter-artisans competition drove the price down to realistic levels. In Nairobi, the price of the ceramic stove is now KSHs 55 (US$ 3.4) down from a peak of KSHs 250 (US$ 15).

At the moment, labour and material costs of the DUB10 stoves are estimated to be 217 FBu. With a price tag of 250 FBu, the thin margin of 33 FBu cannot cover the marketing and distribution costs. In effect, this state of affairs is unsustainable, it would require subsidies ad infinitum. The problem was succinctly stated by Ms. Bwashishma "DUB intervention is excessive, we procure raw materials, we subsidize the marketing and distribution costs. How do we pull DUB out without losing sales? The DUB 10 stove might be abandoned if we withdraw overt support!".

It is apparent that problems of production and marketing of the DUB stove project are interlinked. Similarly, pricing policies difficulties correlate directly with the level of DUB intervention. A sustained promotion of the DUB10 is possible only when the above problems are solved.