Afghanistan is a land locked and mountainous country, and most parts of it have a cold winter season, therefore heating during the winter is of primary importance.

The traditional domestic heating system of Afghanistan is the product of the skill of many generations of people who have lived with it and contributed for its improvement.

There are principally three popular heating methods throughout the country

Tabakhana, which is an underfloor heating system with hot air being connected through a series of subfloor channels.

Sandali, which is a low table covered by a large blanket and with a container of charcoal fire underneath.

Stove, which is made of black iron; These methods are mainly developed from the availability of fuel and construction materials.

In this system of heating the widely used family room is heated by the adjacent - cooking room. A cooking fire is built in the Tanur (a conical shaped oven placed in a hole in the floor of the cooking -area). The draft for the fire of the Tanur comes through a small tunnel called a Muri. The hot air of the Tanur is channelled out through a comples of stone and mud trenches that wind their way under the floor of the living room. The underfloor trenches usually cover the whole living room and hot air finds its way out through the opposite wall.

The fuel in the Tamur is usually covered with a fine ash to dissipate a uniform heat to the subfloor heating channel. A metallic or sometimes a flat stone is laid on top of the Tanur to force the heat to the channels of the neighbouring rooms.

Sandali is a popular heating method in Afghanistan. It is a low table whose size can vary, but on average measures 100cm on each side and 70cm high is common. The table is placed in the middle or in a corner of the room and is covered with a large square quilt or blanket. Soft and puffy cotton mattresses surround the table and rolled beds bundled together are put on the four sides of Sandali for leaning on (see Figure).

A Mangal, a charcoal brazier filled with hot coal and covered with a bed of ashes, is placed under the Sandali to heat it up gradually.

Once the Sandali is prepared, everyone gathers around and pulls the large quilt over their bodies to entrap the rising heat with only their shoulders, arms and heads uncovered.

The Iron Stove is another widely used method of heating. It is made in different sizes from a tiny little foot warmer to big furnaces that warm many rooms. Construction materials of the stove include

Black Barrel Iron, Cast Iron and Sheet Metal. It generally sits on relatively high legs and is placed on a stove board of thin wood covered usually by a sheet metal to protect the wood from burning. The stove usually has two compartments, one for fire and the other for collection of ash, but some stoves have also a small storage space for drying wood and a container for boiling water.

Cooking is also, in many cases, done on top of the stove and many stoves have two to three cooking tops.

The fuel for the stove is coal, wood and, in some cases, sawdust. 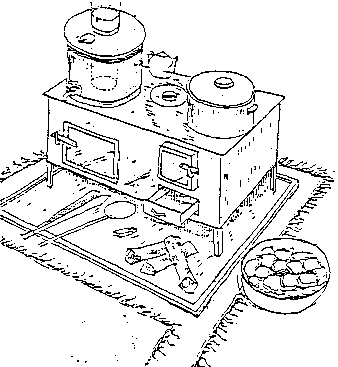 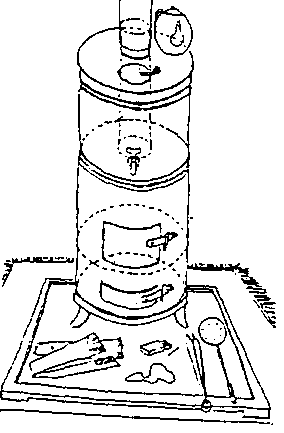