Production of good quality and durable ceramic stoves/liners is one of the main aims of stove projects. This can be achieved by having well trained producers, using good quality clay and the right mixtures (clay/non clay ratio of about 1:1) and firing the liners at the right temperatures.

In Kenya, most producers, women's groups and artisans fire their liners and other pottery ware using the bonfire method. Apart from using a lot of firewood, firing losses of up to 100% have been encountered and after several trials some producers give up unless they are given advice. Liners come out underfired, blackened, and cracked due to the fast and non-uniform firing and customers do not like them. Firing cannot be done when it is raining and hence during the rainy season, no supply of liners. Groups which use open firing of pots also encounter cracking problems with stove liners as the liner has a thicker wall than the pot. As a result the production group has no income from sales.

The bottle/updraught kilns, although cheaper and easy to construct, have problems of uneven temperatures in the chamber. The bottom of the chamber is far hotter than the top area near the chimney and so the liners are not uniformly fired. Other losses, such as breakages, are high but heven so the bottle kiln is an improvement on the bonfire kiln. The project has 3 of these kilns constructed in 1985/86 when production and dissemination of the Maendeleo liners started. At present, these kilns are not being used.

The Women and Energy Project of GTZ-SEP/ Ministry of Energy therefore decided to develop a woodfired kiln suitable for the average small liner producer. The following aspects were considered:

- the kiln to be easily operated by the rural potters.

Efforts were focused on the design of a downdraught kiln as in principle, if well designed, constructed and operated, it is more efficient and can develop high and uniform temperatures. The kiln can be either round with a dome at the top or of the catenary arch type.

The round down draught kiln with a loading capacity of 5.5m3 was designed for big producers of over 1000 liners per month, whereas the catenary arch kiln is designed for women groups/artisans with a monthly output of 100-500 liners. The project is promoting these kilns and the producers are very happy since they don't have to use grass which is scarce and the liners they produce are very good with no discolouration and the losses are very few. The women customers are very satisfied with them.

The new kilns have been used with success by the potter in Muranga district (1500-2000 liners/ month), potters at Kisiriani/Kajiado (1000-1500 liners/month), Ilesi (1500-2000/month capacity) Webolela women's group (300-500 liners/month). Other women's groups using them are Kabete and Keveye. The project has stepped up efforts to have more of these kilns in place to meet the high demand for Maendeleo stoves. 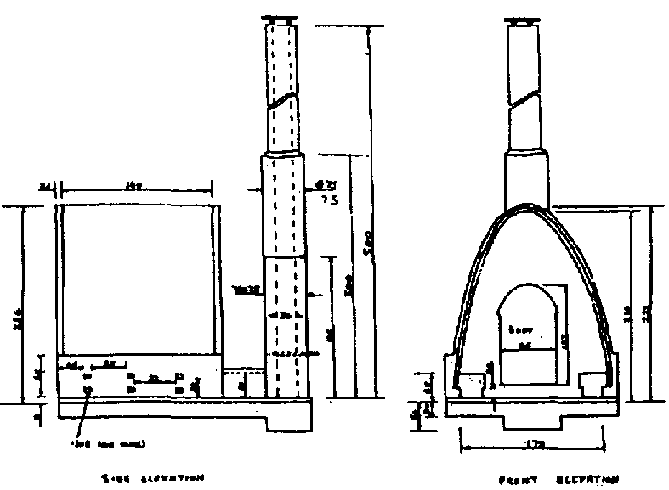 Down draught kilns use the principle whereby the hot gases from the firebox entering the kiln chamber are directed to the top by a baffle wall and then drawn down through the liners. They pass through the flue holes at the bottom of the chamber and exit up the chimney.

In the design of these kilns, the following guidelines can be used:

Bricks: Common red bricks of 7.5 x 11.5 x 23cm can be used since the firing temperature of most clays used to make liners is below 900°C.

Foundation: The kiln structure is heavy and hence requires a strong foundation. Depending on the type of kiln and soil, the foundation depth, especially the ring walls, can vary from l5cm to 60cm. The chimney will require a deeper foundation because of its greater weight. The foundation can be filled with quarry chips etc. The top part of the base must be made level.

Fire boxes: For better heat distribution in the kiln chamber it is better for the kiln to have 2 or 3 fireboxes. For a catenary arch, 2 fireboxes one on each side of the kiln and integrated with the kiln are enough., For durability, the firebox top should be an arch and should go through the ring wall.

Kiln Chamber: The width/diameter and height of the kiln should be the same. The catenary arch kiln should have side primary and secondary air holes below and above the grate respectively. Spy holes need to be incorporated at middle level of the chamber wall for monitoring the changes inside the kiln.

Flue channels: They should be well spread or' the kiln floor, and should be bridged at the top with movable bricks for reducing/increasing the flue gaps which are used to distribute the heat/flames inside the kiln. The flue channel and gaps are used to even out temperatures horizontally. The inlet and outlet cross section areas should be matched.

Baffle walls: Incorporated in downdraught kilns to direct the heat to the top of the kiln chamber. They should be located inside the kiln chamber at the flue inlet. By increasing/reducing their height, vertical temperature difference can be minimized. Where necessary, small holes can be left in the wall to allow small amounts of heat to pass directly into the kiln chamber.

Domes & Arches: The dome for round kilns should have a rise of about 30 cm per 100 cm of span length. For catenary arch kilns, after determining the desired height and width of the arch, the shape of the arch is obtained by use of medium heavy chain hung from each end on a strong vertically placed board. The catenary curve taken up by the chain is traced onto the board to make the form work.

Since tapered bricks are expensive, ordinary bricks are used for the construction of domes and arches.

Insulation: To improve the thermal efficiency of the kilns a lining of insulating material is incorporated. For round kilns it is put between the inner and outer ring walls (about 5-7cm). For catenary arch kilns, the layer is put on the outside with a thickness of about 7.5 cm. The insulating ash material is mixed with soil to apply to the wall.

Damper: A hole/slit must be incorporated between the kiln and chimney or near the base of the chimney for the damper which is a plate/slab inserted to control the draught.

Below is the performance data for the two types of kilns:

* the units are kg of firewood used to fire lkg fired product at 830°C.

The kilns which the project is disseminating use firewood for the reasons below:

- firing temperatures for the liners are not high, about 800°C, and can be achieved with woodfired kilns.

For best results, the firewood must be well dried (10-15% moisture content) and chopped to pieces of 5-7 cm diameter and of length slightly less than the internal length of the firebox. With wet wood, energy is wasted to vaporize the water, a lot of unburnt carbon particles are produced and deposited on the liners causing black patches which are unpopular with liner buyers.

Although the project constantly advises the liner producers to use dry firewood, most potters cannot afford to buy firewood in large quantities and air-dry it for long periods.

Each clay has its own firing temperature. So far, no laboratory tests have been done to determine this but from several firings with the two kilns, a temperature of about 830°C has been found to produce good quality liners when made from muranga clay.

During firing seger cones and a pyrometer are used to ensure that the flame is well distributed and the right temperatures are attained. Before a new kiln is used by a producer, 2-3 test firings are done by the project. The firing temperature should be below the vitrification temperature of the clay used but enough to allow sintering of the liner body to take place to strengthen it against thermal shocks.

The project has field tested the liners fired at 830°C with the rural households and after three months use, they have not developed any cracks. Their performance is still being monitored.