The KCJ - from Artisan to Factory

by S Karekezi and D Walubengo, extracted from "Household Stoves in Kenya - The Case of the

The manufacturing of the KCJ is already a relatively mature cottage industry. As expected, the level of specialization in the manufacture of the stove has increased as has the level of mechanization. There is now a discernible labour division in both Kenya and the Sudan.

Clay liner production has undergone an even more radical transformation. In the early day of the KCJ production, some public sector officials suggested that the liners should be produced by small scale informal enterprises. As a result, most of the initial producers were small operators, who previously made clay cooking pots and flower vases. An example of such a producer was Ilesi Pottery of Western Kenya.

However, the requirements of a good clay liner are more rigorous than those for a cooking pot. It has to be able to withstand the high temperatures of a charcoal fire and be resistant to heat shock. This is because it is quite common for the Kenyan housewife to stop a charcoal fire by throwing water onto it. Further, the liner has to be robust enough to withstand rough handling.

As a result, the level of consolidation and mechanization in the manufacture of ceramic liners has been dramatic. In Nairobi, there are now only two types of producers: mechanized and semi-mechanized.

The mechanized manufacturers, for example Jerri International and Waka Ceramics, use labour saving machinery such as pug mills for mixing the clay; "jigger jollies" for moulding clay liners and temperature controlled electric kilns for firing the liners. 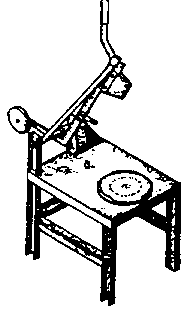 It is estimated that mechanized producers are manufacturing close to 3200 liners a month. Semimechanized producers, for example, Sunrise Clayworks, Jiko Bora, Jerri/Miaki and Rural Enterprises, are now producing an estimated 10,600 liners per month. Thus, the total current production rate in Nairobi alone is in the region of 13,800 stoves a month. This yields an annual total of over 165,000 stoves and the employment of 200 artisans mainly in urban areas. The rapid consolidation and mechanization of clay liner production points to the need for further centralized production of clay liners.

However, a recent household survey carried out by a KENGO team led by Silvester Namuye found that KCJ use is largely confined to the middle class neighbourhoods of Nairobi. The overall penetration rate for Nairobi was in the region of 13% which indicates that the dissemination of the KCJ is far from complete.

If stove cost is the limiting factor then the answer may be cheaper stoves from larger scale production with more mechanization. This would facilitate quality control in liners and cladding, now becoming a serious problem. Stove producers are increasingly producing sub-standard stoves. In pursuit of higher profits or under the duress of fierce competition, a number of stove producers have decreased the amount of vermiculite and cement used in the KCJ, thus adversely affecting its charcoal-saving potential and lifespan. This is resulting in considerable consumer anxiety. Of particular concern is the increasing number of poor clay liners that are finding their way into the market. There is the possibility that if these trends continue, the KCJ could lose a large share of the market back to the traditional Jiko. Thus, the question of quality control has not yet been adequately tackled.

In addition, research on production technology is urgently needed. The rapid pace of mechanization has dramatically increased the amount of capital required to enter the KCJ industry. The implications of these developments on the dissemination of the KCJ are still unknown. Large scale, more mechanized production will be faced with the need to use new and much more expensive steel sheet. This may benefit the local artisan producers who depend on the limited supply of scrap. The KCJ uses 25% more metal than the traditional Jiko.

There has not been any systematic and long-term monitoring of the charcoal saving potential of the KCJ. At the moment, no one is quite sure of the impact (if any) of the KCJ on overall wood energy conservation. Neither is the impact of fuel substitution understood. Could the fuel saving potential of the KCJ lead to increased use of charcoal as a household fuel? Is there a gradual shift from kerosene or wood to charcoal?

Kenya's neighbours are also increasing their production of KCJ type stoves, ea. Ethiopia has produced 20,000, Tanzania 10,000, the Sudan is producing 800 per month, Uganda, Rwanda, Malawi and Senegal smaller numbers. Several other countries are experimenting with variations of the KCJ.

Ed Note: The Kenya Government could influence this transition from production by local artisans to urban based factories by taxing/subsidising the importation of sheet steel. It will need to weigh the potential benefits of its original policy of encouraging decentralized artisan production against the prospects of industrialization and the increased training not only of more sophisticated engineering and pottery workers but also of business skills such as book keeping, planning and management which will result.