The IT Shelter Programme has recently encountered problems with indoor air pollution in Maasai housing in Kenya. The Maasai, a herding community living on the southern grassy plains of Kenya and borders of Tanzania are changing towards a more settled way of life. They require more permanent housing, access to schools, dispensaries and other services as they participate more in the informal sector. Housing has evolved to be temporary and last no longer than 5 years and those Maasai which have become settled find their housing now in a state of disrepair and simply inadequate. The project has made improvements in ventilation, natural lighting, maintenance and general comfort compared with traditional structures and in several houses, some of which have also resulted in greatly increased smoke problems. The two Maasai women involved in a recent study on indoor pollution did not see any value in the smoke and agreed it was not useful for timber preservation and nor did it keep the mosquitoes away.

Cooking practices are changing within the Maasai community; they no long rely solely upon their animals for food and now prepare tea, ugali, meat and vegetable stews, occasionally they cook rice and chapaties. These relatively new foods mean the Maasai now have to cook at least once or twice per day and smoke has become more of a problem since housing design has not kept pace with the changing customs.

ITDG's experiences in the field of household energy indicate that only marginal reductions in indoor pollution can be achieved through the introduction of improved biomass stoves. Chimney stoves perhaps offer the most potential to lower pollution but are proving expensive to install and maintain and there is doubt that they can also save fuel. Hoods, cowls and inglenooks have proved highly successful in northern countries during the late 1800s and early l900s, and even today the openfire place is very popular. However, they are not easily adaptable to the type of housing traditionally used by the Masaai and many other African communities. Techniques for better ventilation have received inadequate attention by engineers and scientists working on development projects. 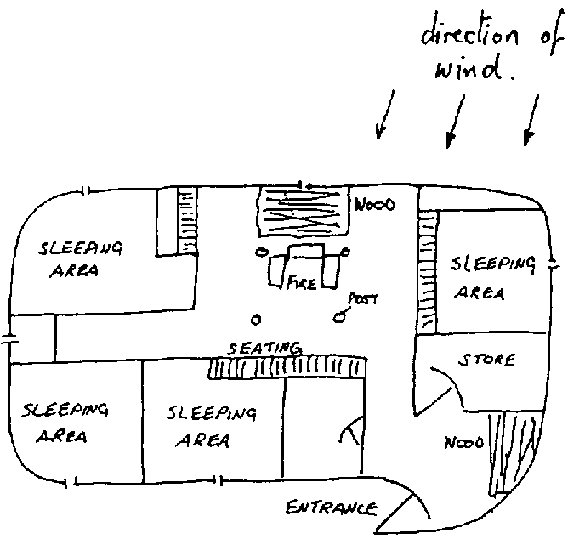 Fig 1 - Plan of a traditional house

1. There is a serious indoor pollution problem in Maasai housing. It appears to be a relatively recent phenomenon and is linked to changed cooking practices.

2. Levels of CO exposure are close to International Exposure Standards and are a cause for some concern. They do not appear to be lethal doses but are indicative of other incomplete combustion gases which are more toxic.

3. Levels of particulate exposure vastly exceed all International Exposure Standards and exceed most other survey results by a factor of 10.

4. As Maasai diets change towards foodstuffs that require more cooking indoors on openfires and

without increased ventilation, women and children are likely to suffer more from smoke pollution.

5. The addition of ferro-cement or other roofing material to reduce leaks and permit water collection may also prevent smoke from escaping through the roof and so greatly increase the smoke problem.

A Draeger Pac II CO meter was used to monitor background CO emissions during a meal preparation. The instrument was placed close to where the cook normally sits while cooking. The natural rate of reduction of CO was also measured. The CO monitor was left inside to record the decay rate.

A cyclone with 6.5pm cut off at 1.9 litres/min was used with an SKC Air Sampler Pump to trap RSP on pre-weighed (accuracy 0.0000lgms) 25mm GFP filter papers. The pump was positioned on the back of the cook and hung from her belt, the cyclone clipped onto her jewellery within the breathing zone.

There are striking differences between the older and more traditional style housing of Nashru and that of Kisembe which has been improved. Nashru was exposed to CO varying between 40 and 100ppm whilst cooking over periods of up to 50mins. In Kisembe's case she was exposed to CO varying between 120 and 200ppm over 80mins. The analysis of these results in Table 1 show that on the basis of averages, TWA* and STEL*, Kisembe's dose exposure was at least double that of Nashru's. However both cases were below the UK standards.

Notes* TWA is the Time Weighted Average over an 8 hour period. STEL is the Short Term Exposure Limit over a 10min period.

Kisembe was exposed to RSP between 10 to 30 times the levels experienced by Nashru. This order of magnitude is perhaps a little surprising but personal experiences confirm that the observers could at least stay in Nashru's house for some minutes compared to Kisembe's house that was intolerable.

Those with flat roof housing like that of Kisembe need to have their roofs modified as a matter of priority to lower CO and particulates levels - evaluate a range of possible solutions. eg.

Further tests and more sampling needs to be camed out on a range of Maasai housing.