The Most Efficient Combustion Heaters Ever Made?

Everybody is nowadays aware of the threat of global warming and the need to diminish our output of carbon dioxide into the atmosphere. The use of renewable fuels such as solar and wind energy is therefore ever more urgent. Wood and other biomass are also renewable fuels.

However, badly burning stoves with unseasoned wood are an environmental hazard because of their emission of sulphur dioxide, which causes acid rain and nitrogen oxides, and other greenhouse gases. This is not true though for a type of woodburning stove that has been in use for centuries in the colder parts of Europe, such as Scandinavia, Eastern-Europe and Switzerland. This type of stove is called a Kacheloven or sometimes a Tilestove. They emit hardly any toxic gases and what's more they are amongst the most efficient stoves when it comes to converting energy available into usable warmth in the house (instead of up the chimney and out into the air). Kachel ovens burn best on softwoods.

How does a Kacheloven work?

Kachelovens used to be made out of firebricks, but the type I will describe here is made of refractory concrete as the heat storing material. The innovations that make this model even more efficient than traditional Kachelovens came from the Finnish stove-expert Heiki Hyitianen and the Dutch Centre for Appropriate Technology "De 12 ambachten". 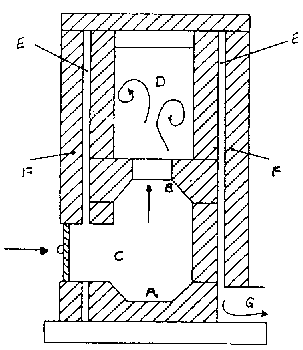 First, the design aims at reaching a high temperature to establish complete combustion of all toxic gases. For this reason the firebox (C on the diagram) has a funnel-shaped top that reflects heat back into the fire and also a funnel-shaped floor to collect the burning wood towards the end of the burning process (B and A). The temperature can go up to 1100°C and the fire doesn't burn longer than 1 hour.

When we start the fire we use well-seasoned wood, (surprisingly softwoods are preferred), that we stack vertically (all aimed at a hot and quick burn). When the gases leave the firebox they enter a second combustion chamber (D), where they are burnt flamelessly. In most other stoves these gases would have entered the chimney where the temperature would be too low for complete combustion. From the Kachel oven there will be almost no polluting fumes and hardly any soot will be deposited in the chimney.

After the turbulence created in the upper combustion chamber the gases pass down two flues (E) at the sides to the bottom of the chimney at the back (G). By this time the temperature of the gases (nearly only water vapour) has gone down to about 200°C, because nearly all the heat has been transferred to the surrounding mass of the stove, which will slowly release it over the next 12 hours. 85% of the energy in the fuel stays therefore in the house compared with 40% to 60% in other woodstoves and 10% to 20% in open fires. An even higher efficiency can be reached if the chimney (hollow bricks) runs through the upper part of the house.

To withstand the intense heat the stove has to be made of refractory concrete, although fire-bricks are a good but more labour-intensive alternative.

There is an outer case (F)which is covered with ornamental glazed tiles.

It is possible to build Kachelovens for baking and cooking and the firebox can always be used for baking after the fire has died down. Kachelovens are often built into the wall between the living room and the kitchen or another room and can incorporate a bench in the design, to make a comfortable warming up place when coming in from the cold, for cats and people alike or can be used for sleeping in the winter.

The warmth produced by the stove is long wave infrared, which is similar to the glow produced by the sun. It does not directly heat the air, but warms objects (walls, furniture, people) it meets in its way. So the whole house warms up when the stove is functioning regularly, but the air stays relatively cool (as when sunbathing in the snow at wintersports). Windows can be opened for fresh air without a considerable loss of heat! There is also much less need for ventilation as the stove only consumes oxygen during one of its twelve functioning hours.

In an article in Popular Science (USA) Ian Schnieder gives the following information about "the classic European stove that's been around for at least 5 centuries". Stove designers know how difficult it is to improve any woodburning stove, even by applying the latest combustion technology. The large size, irregular shape and relatively low energy concentration of wood limit any stove's effectiveness. It's almost impossible to simultaneously achieve both the superior heat transfer produced by a long, slow-burning fire, and the good combustion efficiency of a fast, roaring, hot fire.

But through centuries of painstaking trial and error, the hafnermeisters, or master tile-stove makers, of renaissance Europe developed a remarkably effective compromise. Their solution: a massive stove designed to capture, store, and slowly release the heat produced by a fast-burning fire.

A heat-absorbing maze of masonry

The entire inner structure of the classic tile stove is mortared firebrick arranged in a maze of smoke passages above the firebox. As the wood burns, hot smoke and gases rise and pass through this elaborate ductwork before they exit up the chimney. During this passage the smoke cools, releasing its heat to the heat-retaining firebrick. Only a small percentage of the heat supplied by the fuel - the amount necessary to heat the flue for an adequate draught - escapes up the chimney.

The superior heat-holding ability of firebrick is well documented. While it's only about 20% as dense as cast iron or steel, firebrick stores over 80% more heat per pound than most ferrous metals. But its thermal conductivity is very low roughly 1/45 that of iron or steel. Add an insulating layer of thick ceramic tiles to this firebrick interior and you get a stove that blocks rapid escape of heat, and results in high firebox temperatures, which means more efficient combustion. The volatiles released by the burning wood don't rush up the chimney but are consumed near the burning fuel mass. So a properly run tile stove generates very little flue-clogging creosote and accumulates ashes quite slowly. Cleanout is needed just once or twice a month.

Ed Note: In the cold winter of 19471 lived in a flat in Vienna with a beautiful kachel stove. One small shovelful! of wood or charcoal kept the flat warm all day and almost no ash was left on the hearth.