Letters to the Editor

Ghana's total annual woodfuel consumption is estimated at 8.6 million tonnes, 3.3 million (30%) of which is converted into charcoal. However, due to the large amount of energy lost in the conversion of firewood to charcoal, the use of charcoal for cooking is not as advisable as burning firewood. Nevertheless because most of the population depends on woodfuels for cooking, the efficiencies of the end-use devices will have to be improved. Household dependence on woodfuel is due primarily to easy access to the fuel at all times of the day and the low cost of the end-use devices compared to those for conventional fuels. There is also the fear that other fuels are dangerous to use.

The fuel policy of the Ministry of Energy in Ghana is to decrease the domestic, commercial and institutional dependence on woodfuels in favour of L P gas.

The table below gives a comparison of the yearly cost of using various fuels for cooking and heating in Accra 1991.

Under this policy, the Ministry of Energy has converted 145 schools, prisons and hospitals from using firewood and charcoal to LP gas. In the domestic sector, more than 250,000, 14.5kg cylinders have been put into circulation and about 15,000 one unit, combined cylinder/gas cookers have been sold. The project is being expanded to increase the effective demand for LP gas.

As described in BP30 this project was identified in the Energy Assessment report of 1985, prepared by the World Bank mission. Discussions were then held with Government. Funds and assistance for the development of the programme of disseminating more efficient stoves were provided by the Dutch government and disbursed through ESMAP. During the field test sixth form national service personnel selected for their expertise in dealing with women in their localities were trained. There were therefore no real problems during implementation.

In the area of improved firewood stoves, a study of existing projects in the country has been made. The report on the study indicates that all stoves built by users have been abandoned. This is because no follow-up was made by any of the organizations once the stoves were installed. The Ministry of Energy is therefore initiating its own programme for designing, developing and disseminating more efficient and less hazardous firewood stoves. Actual implementation will begin in 1993 and will be based on the experience of the programme described in BP30.

The problem facing us now is the lack of funds for implementation. The World Bank funding ended in 1992 and the activities outlined cannot be fully implemented. 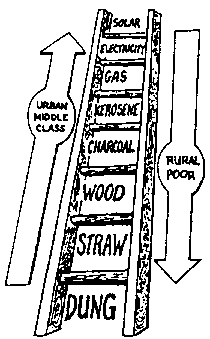 In most developing countries, it is impossible to undertake useful energy analyses using the underlying assumption of movement on an energy ladder, namely income elasticities. The reality of the Third World is one where income is rarely assured at a household level and consequently energy, and other basic needs, remain inelastic.

It is not only the inelasticity of energy in the household basket of basic needs that is at issue. Security of supply is also a critical factor.

In Maputo, Mozambique and Lusaka, Zambia, we conducted relatively extensive surveys of urban household demand. What is obvious from the results of these surveys is that, rather than any move up the energy ladder associated with increasing income, there is a tendency with increased income to maintain all fuel technology systems instead of using monies to improve technology and more valuable forms of energy. Quite simply, the upper-middle class will use wood, charcoal, kerosene, gas and electricity because none of the fuel supplies are guaranteed;

Perhaps if we spent more time looking at improving security of supply rather than diffusing new energy sources and technologies, we would be able to build a better energy future.

A paper recently published by Steven Karekezi and Dominic Walubengo (summarized on page 32 above) is a good example of how a leading project' can advise other stove programmes on effective ways of development. Monitoring and evaluation should allow us to report on how effectively these ideas have been taken up by other programrnes. Otherwise why do we do monitoring and evaluation?

Our BP 30 edition reported on the success of several projects which had changed to commercial marketing of their stoves. The paper by Steven and Dominic points to interesting lessons which emerge from their history of the Rural West Kenya stove programme.

The first is that if you leave everything to the open market you may get small businesses being squeezed out by big ones and the second is that increased competition and price cutting can give an adverse effect on product quality. This may take away the livelihood of stove artisans and women's groups involved in production and marketing.

Obviously retail prices will influence the consumer's choice but they need to be made more aware of the consequences of buying cheap, inferior stoves such as some of the Anagi "lookalike" stoves in Sri Lanka.

We need to train the producers in the use of quality control and educate their customers in how to choose the right stove and get good value for money.

We have recognised that in some situations women's groups may be unable to compete effectively with large producers. The Maendeleo Women's groups chose to develop a different stove to suit their special needs. Is this the right solution for other programmes??

A Gaspe, N. Hammami, A Koopmans

Contributions are welcome in the form of articles of not more than 2,000 words including line drawings, photographs, simple graphs etc., where appropriate. All correspondence should be addressed to Boiling Point, ITDG, Fuel for Food Programme, Myson House, Railway Terrace, Rugby, CV21 3HT, UK

Opinions expressed in contributory articles are those of the authors and not necessarily those of the ITDC SHE Programme. 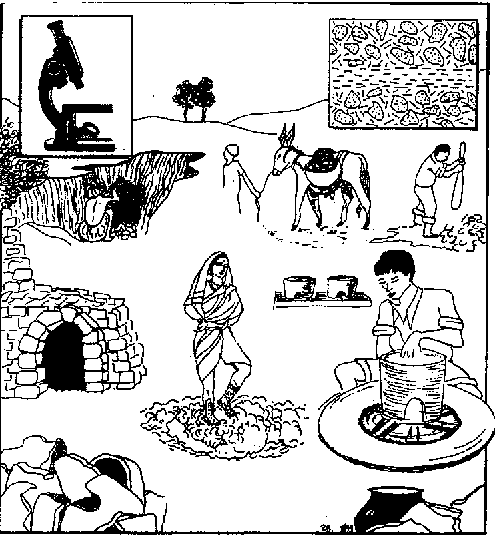 Intermediate Technology's aim is so enable poor people to develop and use productive technologies and methods which give them greather control over their own lives and which contribute to the long-term development of their communities. ITDG is a British charity mainly funded by the Overseas Development Administration.