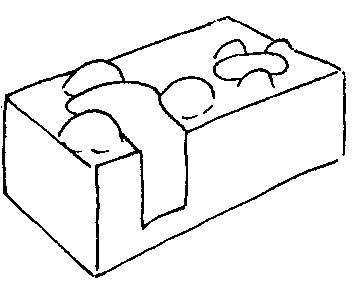 The Chencottai chulah is a traditional ceramic woodburning stove that has been in existence for over SO years. It is produced in 3 pottery villages by 100 families and is purchased by over 200,000 households per year in the southern parts of Kerala and Tamil Nadu states. It is estimated that in the region of 2-3 million units have been sold and because it can last up to 30 years, 1.8 million are probably still in use.

For Chencottai Chulahs the clay is dug from neighbourhood tanks only a few kilometres away from the pottery during the dry season as and when required.

The sedimentary clay laid down by water running off the Eastern side of the Western Ghats and collected in tanks contains fine sand usually sufficient for the potters' needs. If necessary, additional sand is added and is usually found in the same tank but from a different place. The water flowing into the tanks seems to deposit clay and sand separately but in much the same place each year. Both the sand and clay are very accessible and found only a few centimetres below the grass growing on the surface layer. The raw clay is damp and dug with an adze by slicing it away from the adjoining bank.

The clay is unloaded outside the potter's house cum workshop and dries in the sun. Water is added to it in an adjoining pond created with some of the raw clay. When the raw clay has absorbed the correct amount of water, the mix is carried inside and compressed into a mound and is then worked by shearing the clay down the side of the mound with a foot. This action is repeated 4 times and also helps to find stones which are picked out by hand. The mound is left covered with polythene until it is required for moulding. The preparation of the clay does not appear to be different from other potteries in South India but the clay does seem to be remarkably free of stones.

The potters understand the need for sand in the mixture very well. They say clay for throwing must be very pure but for chulahs it must contain sand. If there is insufficient sand the chulahs crack but when there is too much sand the 'ring' is a very hard sound - perhaps indicating the fired clay is too dense although it is generally believed that increasing sand increases porosity.

A range of chulahs is available comprising single and double pot models made in three different sizes. All the work is carried out along an assembly line on a concrete floor of the workshop with the aid of a few simple tools including 4 side boards, 2 paddles and sponges. The whole process takes between 24 and 30 days. It takes 4 days to do the moulding and forming, 3 days to set, 15 to 20 days to dry in the shade and then 2 days of sun drying before applying a red slip. Measurements taken during the drying stages indicate the final drying shrinkage to be around 10%.

Slabs of clay are rolled out on the workshop floor and then cut to size and used to form the Chulah base, and inside and outside walls. Wooden boards placed around the chulah provide support to press the clay against. The flat top is made by folding in the top edges of the inside and outside walls and squeezing the resulting joint between the fingers. On the second day, additional clay is added to the top surface and the bridge between the first and second pot holes is formed. On the third day the chulah walls are made flat and square, and on the fourth day the chulah is vigorously polished inside and out. Finally the chulah is left for 2-3 days to set and harden before moving it to the final resting place to dry out completely.

The firing cycle commences around mid-day with slow heating for 3 to 4 hours. Full firing then follows and takes up to 10 hours and the kiln is then left to cool for 24 hours. The losses are generally very low and rarely greater than 10 to 20 per load of 500 chulahs. All three villages use wood fired updraught kilns of the KVIC type.

Only men carry out the clay preparation and building work on the first and second days. Women do the paddling and finishing work required on the third and fourth day; if necessary the men will help out also. These role demarcations are typical of other South Indian traditional pottery units making cooking and water pots.

Looking at the overall picture for the entire life of the Chencottai Chulah, as many as 2.1 to 2.6 million chulahs may have been produced assuming averages of 1800 and 2250 chulahs per year per family respectively.

The life of a chulah has been reported to be 30 years both by consumer and producer. If we assume it to be 20 years the likely numbers of chulahs in use are in the range of 1.4 to 1.8 million. To date the Government of India has disseminated 11 million chulahs of all types.

What can be learnt from this experience with regards to improving the durability of clay stoves? This still remains a difficult question to answer because very little detail is known about the raw clay but some issues worth considering are:

1. Potters understand the need for more sand than is normally used in clay to throw cooking and water pots.

2. A shrinkage rate of 10% seems high. In Sri Lanka stoves thrown on potters wheels generally suffer severe cracking problems if the clay shrinks more than 10%. It is generally recommended good practice to keep shrinkage rates below 7%.

3. The simple processing techniques used may help to limit the clay platelet alignment and so limit the residual stresses caused by anisotropic shrinkage in drying and firing.

4. The square shape may also help to limit residual stresses because the flat sides are freer to shrink ani sotropically, unlike a cylinder. However, this is a weak explanation and one would expect greater stresses to be concentrated at the corners.

5. The paddle or beating process carried out by women may be a contributing factor. The process is clearly derived from the traditional way of beating water pots and cooking pots when they are leathery. It is used to make the pot walls very thin and perfectly shaped. In chulah making it is used to make a perfect square shape and the walls flat. The action is very different to pot making, because there is nothing to support the wall from behind. In pot making a round stone is held behind the clay so that when it is struck with the paddle it is squeezed and compressed very slightly.

6. The firing technique remains similar to that used by other large pottery communities in South India and does not appear to be a major contributing factor towards the chulahs unique durability.

7. One cannot help thinking that it is some unique characteristic of the clay itself that gives its strength eg;

- the way sedimentation takes place each time the clay settling tanks are filled with water,

- the particle sizes and how they are distributed through the clay body.