The ceramics research laboratory in the Building and Industrial Minerals Research Unit of the National Council for Scientific Research (NCSR) has characterized various Zambian clays to determine their suitability for the manufacture of a portable, charcoal burning stove made out of fired clay without a metal cladding as used for the Kenyan Ceramic Jiko.

Work started in 1987 under the joint sponsorship of the Government of the Republic of Zambia (GRZ) and Japan International Co-operation Agency (JICA), to replace the current, widely used mbaula (brazier). The inefficient utilisation of charcoal leads to its high demand, which leads to massive destruction of forests resulting in environmental costs in terms of loss of soil fertility, soil erosion, and disturbance of natural drainage systems which could result in reduced water retention.

The project aims to make a clay stove which uses charcoal efficiently and which:

1. does not crack from thermal stresses during use for a period of at least one year.

2. holds enough fuel to complete any cooking cycle started on the stove.

3. is well insulated so that it can be moved about with bare hands while it is in use, ie. the outside part of the stove shall not be too hot to handle with bare hands.

The research has characterized various clays and non-plastic ceramic materials that are suitable for the manufacture of the stove.

The stove based on a Japanese design, as shown in Figures 1 and 2, has been made in the laboratory from suitable clays. This type of stove has two separate parts, an inner and outer jacket, to increase the insulation properties of the stove, to keep the outside of the stove cool and to facilitate construction. Charcoal is placed in the top of the stove as with the KCJ. 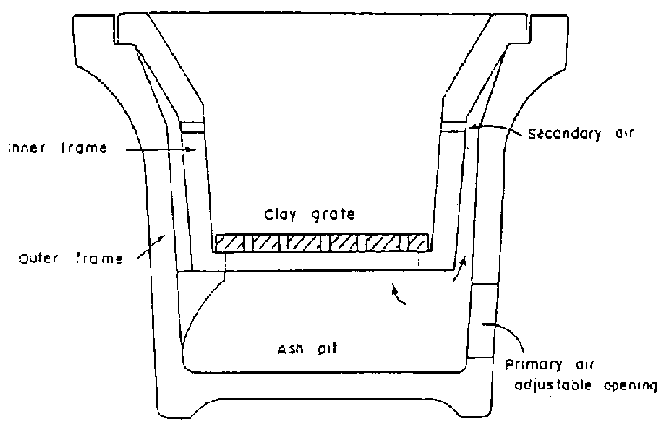 Cracking of the stove during use has been prevented by combining clay body formulation considerations, firing temperature of the final product and design considerations of the fuel holding chamber.

Because of the success achieved at the laboratory level, the Zambian National Council for Scientific Research has now built a pilot plant with a production capacity of about 1000 stoves per month to produce the clay stoves on a semi-commercial basis. However, the plant is currently producing only 400 stoves per month because of limited kiln capacity.

The stoves are sold to urban households for the purposes of establishing performance standards and also for popularising the claystove in the urban centres. Users must be encouraged to utilise charcoal more efficiently to save the forests as charcoal is made from felling live trees.

Another NCSR team is working on the development and production of coal briquettes. The briquettes are targeted towards replacing charcoal as domestic fuel in the near future.

Ed Note: We have written to the Zambian NCSR for details of the clay bodies and firing temperatures used for the new stove.