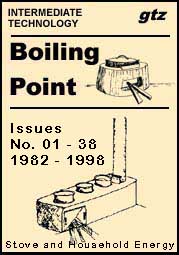 (The following is a shortened version of a report on the status of mud stove building in Malawi, which the authors assessed assisted by funds from the Blantyre Polytechnic. The authors hope that it will lead to unification of the work on mud stoves in that country.)

At the National Appropriate Technology Co-ordinators' meeting in Nairobi in December 1982 it was suggested that Blantyre Polytechnic (Malawi) should research into the possibility of introducing mud stoves in Malawi. Until preliminary work was started it was not realised how much work had already been done.

The traditional method of cooking in Malawi is using three stones. The earliest reference to mud stoves found, was made in the 1930's by teachers at Jeans School, Domasi. In fact, it has been suggested that the mud ovens used for commercial bread baking in Mzimba District were introduced by an ax-student of this School .

The next reference is in the 1960's with a suggestion by a UNICEF area officer that Magomero Community Development Training College should both build and encourage the use of mud stoves. This idea spread to the Thuchila Farm Institute (Mulanje District) and at both institutes, mud stoves, of various designs, have been built and tried ever since.

Since 1980 work on mud stoves has expanded world-wide, including Malawi. The Energy Systems Unit of the Ministry of Forestry and Natural Resources has a project constructing and testing mud stoves at Colby College of Agriculture. A low-cost housing project at Sadzi in Zomba has used the 'Lorena' type stove. The University of Malawi (including Blantyre Polytechnic) has been the most recent participant in research programmes related to mud cooking stoves.

One important reason is to save wood, although a recent survey has shown that villagers do not realise that there is a firewood shortage, and have no strong reason for saving wood unless they travel large distances to get it.

Like much of the developing world, Malawi is facing the problem of deforestation. More trees are cut than are planted each year, and if an efficient mud stove could be designed which would use much less wood that the 3-stones fire, then its widespread introduction could solve the deforestation problem. The prospects for designing such a stove are high, but whether they would work efficiently in the rural situation is uncertain, as the stoves would not De built exactly to design unless a lot of money were spent to train stove builders.

Another important consideration is nutrition. If cooking can be made easier and quicker for the women, then hopefully they will cook more often. If two or three pans can be heated at the same time then a greater variety of food could be cooked and hence a more balanced diet provided.

Other positive benefits of the introduction of mud stoves would be the increased safety of a covered fire, stability of the pots, and the reduced effect of strong winds, which makes using the 3 stones difficult.

However, there are disadvantages: they provide less light and warmth, most designs of mud stove are not portable, and there are still problems with the designing of an efficient and long lasting stove.

One important decision to be made is whether to use only locally available materials (such as clay and sand) or to use metal as well. Not using metal keeps the cost at a minimum - except for labour costs. However, by using metal particularly for chimneys- a stronger and longer lasting stove is constructed. Both approaches nave been made by the groups working on mud stoves in Malawi.

This unit has built and tested some very efficient stoves at Colby College. The nest stoves use only 50%-60% of the wood consumed by the 3-stones. The whole stove, including chimney, is made of mud, the mix being 50° anthill clay and 50% dambo sand. 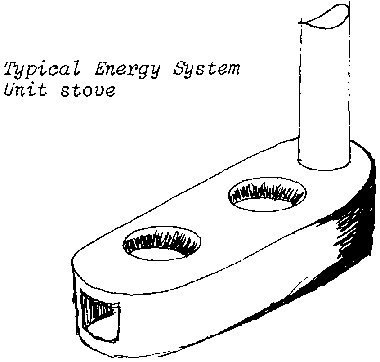 Their designs are improvements on earlier ones: the changes made were

- reducing the size of the firebox

- cutting a lip around the pot holes, so that the pots sit lower down and are more stable

- modifying the mud mixture in an attempt to solve cracking problems

- supporting the chimney against a building to overcome chimney breaking.

The stoves using significantly less wood than the 3-stones take as much time to cook. Other Unit designs were found to cook faster but tended not to save wood.

The Unit hopes to start field trials of their stoves.

Stoves have regularly been built here by trainees since the 1960's, but they have proved to be less efficient than the 3 stones. A wide variety of stoves has been tested, the most efficient being one similar to those of the Energy Systems Unit.

Again, various designs have been tested. Most recently efforts have been concentrated on a large Lorena type stove. 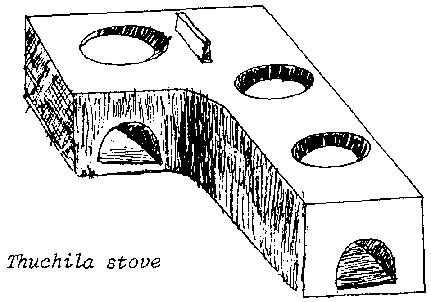 This stove has been introduced into the rural area by extension workers. The reactions of the villagers have been

Advantages over the 3 stones

- safer, children cannot fall into it, and it never gets hot enough outside to cause burns

- Better in windy weather, when it is difficult to use the 3 stones.

Disadvantages compared with the 3 stones

- it does not provide as much warmth and light

Also, these stoves have suffered from cracking - particularly above the fireboxes. This has been overcome by smearing with more of the mud mixture (50% clay, 50% sand) when required.

Mud stoves have been built in the low-cost houses built at Sadzi for the UN Centre for Human Settlement project. They have 4 pot-holes and a metal chimney, but tests have shown them to be less efficient than the 3 stones. Two stoves were rebuilt but severe cracking problems followed.

These have been investigated by the Energy Systems Unit and Thuchila Farm, the former finding them highly efficient, while the latter having problems in getting them to work.

These are popular in urban areas. The Polytechnic plans to investigate possible design improvements, and the authors know of no other work in Malawi done or planned for charcoal burners.