by Caroline Ashley, SHE Programme, ITDG

At the end of 1991, ITDG carried out an evaluation of its project in West Kenya, where potters in 5 women's groups have been trained to produce the Maendeleo stove, made of fired clay. The project began in 1989, after another women's group, called Keyo, had already successfully established a stove-producing enterprise. The project's objectives include both providing income-eaming opportunities for the potters, and improving the quality of life for women who use the Maendeleo (a fuel-efficient wood-burning stove produced using a paddle mould—see Stove Profile No. 6, on page 37).

The evaluation found that much progress had been made: 50 potters are using their training, and have produced around 3,000 stoves. However, neither stove production nor marketing are yet on a firm, sustainable basis. The evaluation recommended that the project change direction, and in the next two years focus on creating a commercial market for the Maendeleo, and helping the potters' groups to be self-reliant in production, marketing, and running their business. 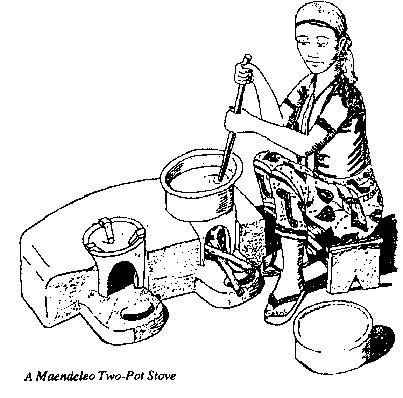 Strengths of the Project

• Women potters earn money, and seem to enjoy their work. They usually decide how to spend their earnings, and seem more likely to spend it on the family than would men. So although the earnings are low, the non. financial benefits such as increased economic independence and status are significant.

• Women who use the Maendeleo like it and say it saves them time and money. For fuel-purchasers, the stove pays for itself in 6-14 weeks. Fuel gatherers can save up to 2 hours collecting time per week. Cooks say the kitchen is cleaner and safer.

• The way ITDG trains potters seems effective and appropriate for rural women, as it is based on regular training visits to women's homes, training by other, experienced, potters and exchange visits to other potter groups. The work demonstrates that women can be successful technology promoters if training is carefully designed.

• Home Economists (extension workers) use the stove in their work with rural women as a "springboard" for introducing other development issues, such as cooking more nutritious food, improving kitchen hygiene, and family planning.

Weaknesses of the Project

• Almost all the stoves are sold and installed by Home Economists of the Ministry of Agriculture, who rely on a transport subsidy which is about to end without alternative distribution methods, future stove production is threatened.

• The potters' groups have received insufficient training to overcome the many problems in producing good quality stoves by themselves:

- 30 to 50% of liners crack or break during drying and firing. The many reasons include not enough sand mixed with clay, poor moulding, insufficient quality checking, weather too warm while drying, and too wet and windy while firing.

- potters lack the skills and time to market the liners themselves

- potters lack the business shills needed to calculate prices and profits to save money for repairing and buying equipment, and to expand their business.

- some groups still depend on ITDG for checking the quality of stoves, and all depend on lTDG for buying or repairing the paddle mould.

• Technical training in stove production has been good, but more work is needed lo reduce the high rate of cracking and breakages. Some groups need improved kilns or shelters to reduce cracks, but have insufficient funds.

• Potters appear satisfied with their training, but it has not been sufficiently participatory. Groups are not aware that they can help to plan and choose their own training.

• Because so many stoves are rejects, the potters' profit from liner production is small—a few hundred shillings per year. Few, except Keyo, are earning more than they could from other activities such as making traditional pots.

Over a further and final 2 years, ITDG should focus on the following objectives:

ITDG should assist groups to set up a system for marketing and installing Maendeleos that is not dependent on home economists, and should produce promotional material. Potters, home economists, ITDG, and commercial retailers should work together on a marketing strategy.

ITDG should continue training potters for a further 1 to 2 years. The aim should be to make sure women can carry on producing stoves and benefiting from their work in the future, without ITDG's support. To reduce cracks, potters should be encouraged to do more careful quality control. ITDG should recommend kiln designs, train groups to make bricks for building a kiln, and help them to apply to other organizations for funds when necessary. The groups should be offered more training in marketing, business skills, group organization, and record keeping. A more participatory approach to training should begin with joint quarterly planning sessions to plan group activities and ITDG inputs.

3. Working with other Organisations

Based on the experience in West Kenya, ITDG should provide information and training to other organisations in East Africa that train Maendeleo producers, and that work with rural women, on stoves, or household improvements.

There are many lessons to be learnt that are relevant to other projects working with women, promoting stoves or supporting new technologies.

(ii) By working with women producers, projects are more likely to reach poor, female-headed households, where even small earnings can bring significant benefits for the women and their families. However' intensive training inputs are needed, and the scale of production is limited by women's lack of spare time.

(iii) Subsidising stove sales is unlikely to be sustainable in the long term, so if producers and users are to continue to benefit, commercial markets must be developed. Nevertheless subsidies can help to ensure initial high sales, increase awareness of the stove, and reach poor consumers. Dissemination by extension workers brings added benefits when the stove is used to help get across other development messages more effectively.

The evaluation's recommendations are now being implemented by the ITDG project team in West Kenya: a marketing strategy has been drawn up, a Community Development officer will soon start working with potter groups to build self-reliance, and kiln research is planned. The potters were given a summary of the evaluation in Luo: having discussed and agreed with the recommendations, they are now planning how to find new customers and how to be less dependent on ITDG. The evaluation has also been discussed with Home Economists, and they are participating in the marketing plans. Boiling Point will keep you informed of progress in creating a commercial market for the Maendeleo.

The evaluation was carried out by two ITDG social scientists and Mrs Chavangi, Project Coordinator of GTZ's Special Energy Project in Kenya. Copies of the report are available from ITDG.